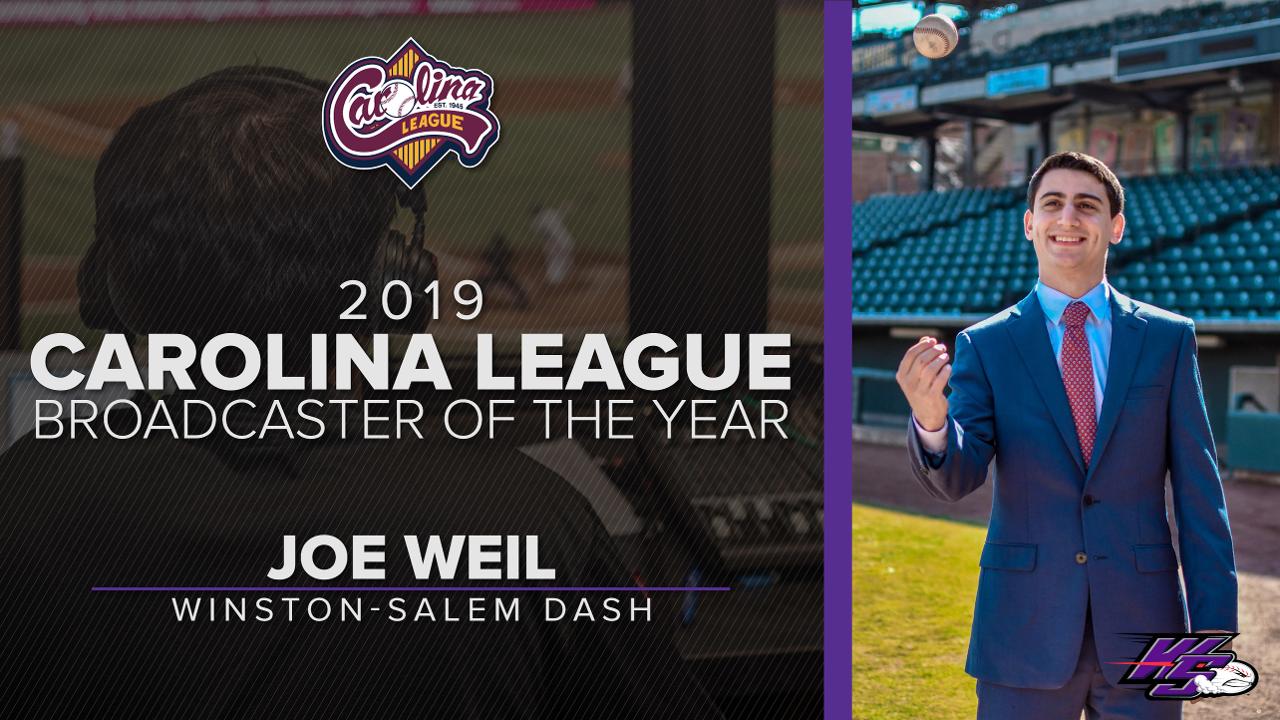 WINSTON-SALEM, N.C. (Oct. 8, 2019) - Joe Weil, the play-by-play broadcaster for the Winston-Salem Dash, has earned the Carolina League's eighth-annual Broadcaster of the Year award. Weil received the most votes among the league's lead broadcasters and broadcast assistants.

Weil, 26, has been a member of the Dash's broadcast team since the 2016 season. The Boston University graduate took over as the lead broadcaster prior to the 2018 season. Before joining the Dash's organization, Weil was a broadcaster for the Falmouth Commodores of the prestigious Cape Cod Baseball League in 2015.

In addition to his duties with the Dash, Weil has worked as a studio host at Learfield IMG College, which is based in Winston-Salem. He has been on the air for a pair of National Championship games in college basketball - Villanova in 2016 and Gonzaga in 2017. The Summit, N.J., native currently serves as the radio pregame, halftime and postgame host for Notre Dame football.

"This award is a tremendous honor, and I am humbled that my peers have chosen me as the league's Broadcaster of the Year," said Weil. "All of the voices in the Carolina League are extremely dedicated and talented, so it means a lot to receive this distinction. It is also a great honor to be in the class of past winners, including former Dash broadcaster Brian Boesch, one of my professional mentors and closest friends, along with several great friends in Scott Kornberg, Kyle West and Greg Young."

"When I found out about the award, I immediately thought about all the people who have helped me develop into the broadcaster and person I am today," Weil continued. "I want to thank my parents, my girlfriend Margaret, my friends and my co-workers for their continued emotional support. I also want to thank the Winston-Salem Dash for giving me the chance to call games during the past few years, and the Chicago White Sox for providing an opportunity to work and learn within an outstanding baseball organization. As a lifelong baseball lover, there was no greater feeling than being at the ballpark and working with manager Justin Jirschele, the rest of our coaching staff and the players on a day-to-day basis this year. And finally, I want to thank all of the fans of Dash baseball who tune into our broadcasts throughout the season."

"Dash fans who listen to our broadcast certainly know how talented Joe is at providing descriptive insight into the action for all our games," Dash President C.J. Johnson said. "What many fans probably don't realize is how much Dash content Joe provides outside of his nightly broadcast. Joe is responsible for the majority of our social media content, marketing and press releases. He has done an incredible job at increasing our social media reach by providing interesting and timely information to our followers. This award speaks to his talent on the air and hard work off of it."

Weil joins a prestigious list of honorees for an award that began in 2012. The inaugural winner, John Sadak of Wilmington, is now a national play-by-play broadcaster for CBS Sports and Westwood One Radio and worked as a fill-in with the New York Mets radio network this season. Carolina's Darren Headrick won the award in 2013, and he is currently the women's basketball and baseball broadcaster at the University of Kentucky. Boesch, who took home the honor in 2014 and 2016, was recently named the play-by-play broadcaster for the University of Michigan's men's basketball program. Scott Kornberg, a co-winner in 2017, jumped from Myrtle Beach to Double-A Jacksonville in advance of last season, and he is the Jumbo Shrimp's Media and Public Relations Manager.