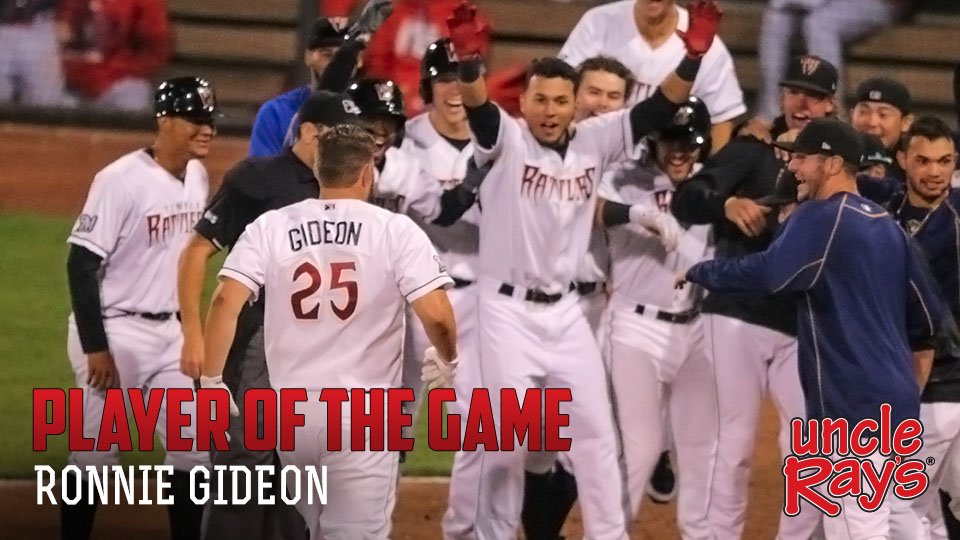 GRAND CHUTE, WI - Ronnie Gideon hit a two-run home run in the bottom of the ninth inning to give the Wisconsin Timber Rattlers a 4-3 win over the Peoria Chiefs at Neuroscience Group Field at Fox Cities Stadium on Thursday night. The walkoff homer gave the Rattlers the victory and kept hope alive for a late-season run to the playoffs.

Peoria (61-68 overall, 31-29 second half) rallied with two outs in the top of the second inning to take the lead. Evan Mendoza singled and took second on a wild pitch. Juan Yepez was next and he hit a slow grounder behind third base. The throw to first was late and Yepez tried to score. The throw home by Ronnie Gideon was on target, but Mendoza's slide knocked the ball out of catcher Mitch Ghelfi's glove. Mendoza slid past the plate, but was able to reach back to touch it before Ghelfi could recover the baseball and Peoria was up 1-0.

The run was the only one allowed by Timber Rattlers starting pitcher Adrian Houser. Houser, who is on his way back from Tommy John Surgery last July, made six brief rehab assignments for the Arizona League affiliate of the Milwaukee Brewers before joining the Rattlers (53-75, 27-33) for this start. He allowed a run on three hits with three strikeouts over three innings before leaving on his pitch limit.

Peoria starter Ian Oxnevad pitched five scoreless innings and allowed two hits before turning the game over to the bullpen.

Colton Thomson struck out the first two batters he faced in the sixth before giving up singles to Mario Feliciano and Mitch Ghelfi. Max Almonte took over for Thomson and got the final out of the sixth.

In the seventh, Joantgel Segovia singled with one out and was still there with two outs. Then, Zach Clark launched a two-run homer to left to give the Rattlers a 2-1 advantage.

The Chiefs struck back in the top of the eighth inning against Owenby. Mick Fennell reached on an infield single. Brian O'Keefe cranked a one-out home run to left and the Chiefs a 3-2 lead.

Austin Sexton, the third Peoria reliever, entered the game in the eighth inning and worked a 1-2-3 frame. But, it was a different story in the ninth.

Dallas Carroll started the rally with a double to right. The Chiefs infield was expecting Gideon to bunt. He swung away.

Gideon cranked a 1-1 pitch from Sexton over the wall in left for the walkoff homer. The drive was the second walkoff home run of the season for the Rattlers. Tucker Neuhaus hit the other walkoff homer for Wisconsin and he hit it in the tenth inning of a game on April 22 to beat Peoria 7-6.

In the second half Western Division playoff race, the Quad Cities River Bandits beat the Beloit Snappers 5-2 and the Clinton LumberKings scored five runs in the ninth inning to beat the Burlington Bees 7-5. Quad Cities win clinched them at least the Wild Card and they now lead Peoria by eight games. Peoria stayed 2-1/2 games clear of Beloit. Clinton is just three back and the Rattlers have moved to within four games of the Chiefs. Burlington is six games out of the Wild Card spot. There are ten games left in the season.

The radio broadcast is on AM1280, WNAM starting with the Potawatomi Hotel & Casino Pregame Show at 6:10pm. The broadcast is also available on TuneIn Radio and IHeartRadio.