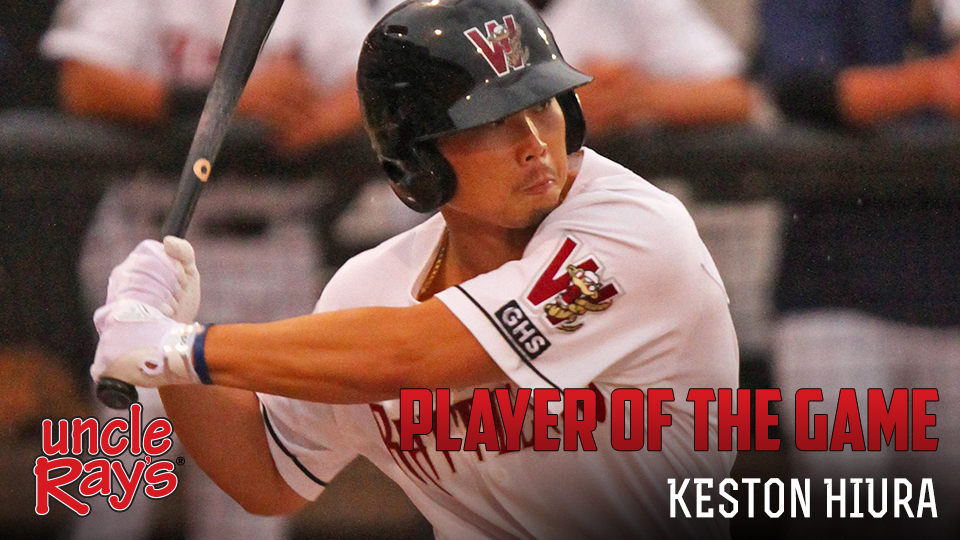 GRAND CHUTE, WI - The Wisconsin Timber Rattlers broke a 2-2 tie with three runs in the seventh inning and went on to defeat the Cedar Rapids Kernels 6-2 on Saturday night at Neuroscience Group Field at Fox Cities Stadium. Keston Hiura had RBI hits to tie the game and put the Rattlers in front and Nattino Diplan had a strong relief outing to close out the win.

Demi Orimoloye gave the Timber Rattlers (45-65 overall, 19-23 second half) a 1-0 lead in the bottom of the second inning. He drew a walk with two outs and took second on a wild pitch. Orimoloye stole third and scored when the throw was missed by the Kernels third baseman.

Cedar Rapids (57-55, 19-23) took the lead in the top of the fifth inning. Joe Cronin drew a walk with one out. Jordan Gore hit a two-out, two-run home run to right-center. Those were the only runs allowed by Rattlers starter Zack Brown over his five innings of work.

Wisconsin rallied to tie the game in the bottom of the fifth. Devin Hairston singled to start the inning and Dallas Carroll singled with one out to put runners on first and second. Hiura knocked in Hairston with a two-out single to center and the score was 2-2.

The Kernels nearly took the lead in the top of the seventh. Hank Morrison doubled to start the frame against Diplan and moved to third with the go-ahead run on a ground out. Diplan kept the game tied by striking out the next two batters to end the threat.

Hiura gave the Timber Rattlers the lead in the bottom of the seventh. Trever Morrison singled to start the inning. Dallas Carroll attempted to bunt Morrison into scoring position, but Kernels' catcher Ben Rortvedt had a play at second. However, the throw was wild and the Rattlers had runners at first and second with no outs. An unsuccessful bunt with two strikes by Zach Clark ended in a strikeout and kept the runners where they were. Hiura changed that with a single to left to score Morrison for a 3-2 lead. The throw home was late and allowed Carroll to move to third and Hiura to take second.

Ronnie Gideon immediately added to the lead with a ringing double off the wall in center to score two runs and give the Rattlers a 5-2 advantage.

Carroll, who had three hits on the night, padded the Wisconsin lead to 6-2 with a two-out, solo home run to left in the bottom of the eighth inning.

Diplan closed out the game with a 1-2-3 ninth inning. The Rattlers reliever only gave up the double to Morrison. He walked none and struck out six over four scoreless innings to earn the win.

The series continues on Sunday afternoon. Josh Pennington (0-2, 4.02) is the scheduled starting pitcher for the Timber Rattlers. Cedar Rapids has named Charlie Barnes (0-0, 0.00) as their starter. Game time is 1:05pm.

The first 1,000 fans to attend this game will receive a poster featuring Keston Hiura, the #1 pick for the Milwaukee Brewers from the 2017 draft, from Brew Pub Pizza.

Curious George also wanted to see what our games were like on Sundays and if you missed him on Saturday, you can see him before and during Sunday's game as part of our series of visits from PBS Kids' characters.

Timber Rattlers players and coaches will wear their Brewers-themed jerseys during the game as part of Brewers Sunday with Rasmussen College and Star 98. Fans may play catch on-field for thirty minutes courtesy of Rasmussen College starting at noon. Players will be available for a postgame autograph session sponsored by Tundraland.

If you can't make it out to the ballpark, there are several ways to follow the action. The radio broadcast is on AM1280, WNAM starting with the Potawatomi Hotel & Casino Pregame Show at 12:45pm. The broadcast is also available on TuneIn Radio, IHeartRadio, and MiLB.tv.