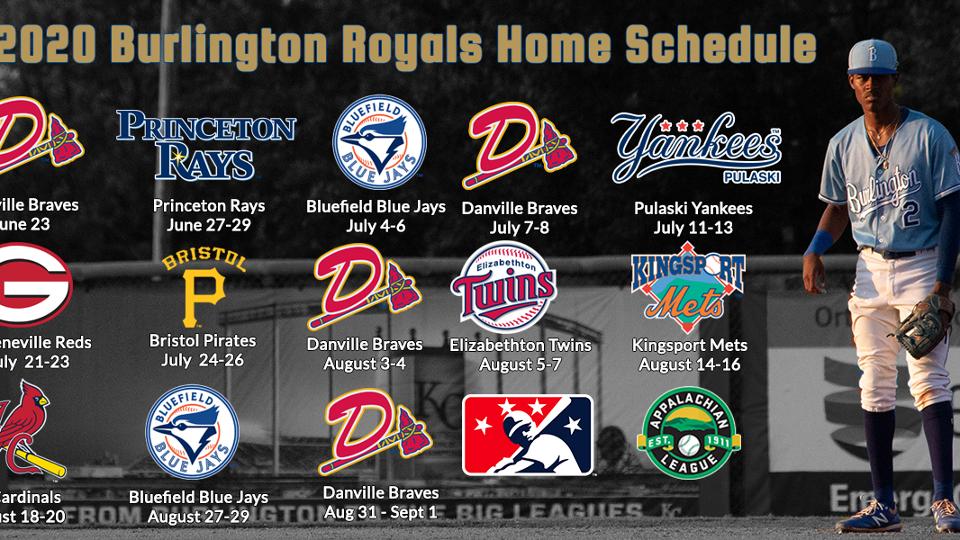 In conjunction with the Appalachian League, the Burlington Royals released their 2020 regular season schedule today. All game times will be announced at a later date.

Opening day is scheduled for Monday, June 22 at Dan Daniel Memorial Park in Danville, VA against the Danville Braves. The road start will mark the third consecutive season that the Royals open up their season on the road. However, the home opener will be just one day later when Danville makes the commute trip down to take on the Royals at Burlington Athletic Stadium on Tuesday, June 23.

The long tradition of being home for July 4th continues in 2020 as the Royals will start a five game homestand against the Bluefield Blue Jays and Danville Braves.

The Royals will host 34 home games at Burlington Athletic Stadium including 4 in June, 14 in July, 15 in August, and 1 in September. Appalachian League playoffs would start on or around September 3 should the Royals make it again like they did in 2019.

The 2020 regular season schedule will be avaliable online soon. Game times have yet to be determined, although most games will start at 6:30pm. For additional information please contact the Royals front office at 336-222-0223. Season tickets and other ticket plans will be available for purchase at a later date.