Suns Close Out Season with BlueClaws 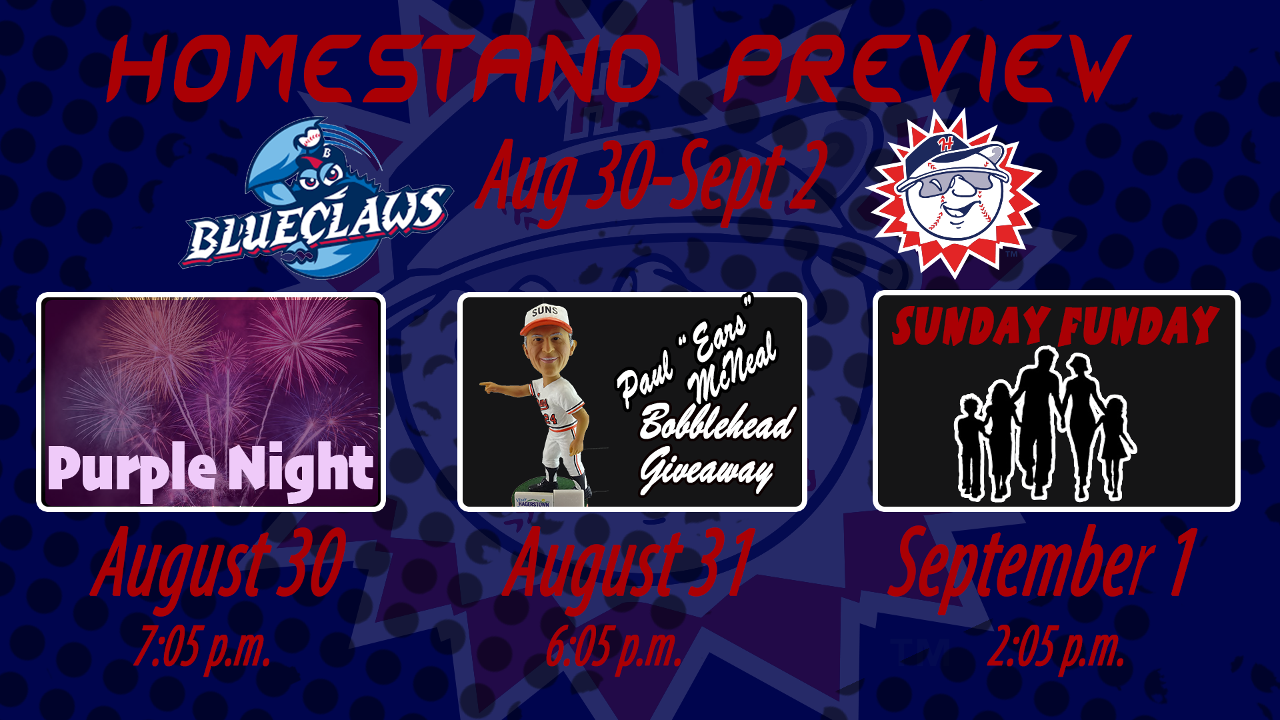 Your last chance to catch the 2019 Suns is this weekend against the Lakewood BlueClaws!

HAGERSTOWN, MD (August 30, 2019) - The Suns welcome Lakewood to Municipal Stadium for a four-game series August 30-September 2 to close out the 2019 season.

Hagerstown is 9-12 against the BlueClaws this season and has dropped two of the last three contests vs the BlueClaws at Municipal Stadium.

The BlueClaws will finish last in the Northern Division this season, although, their second half has been a bit better than their first. Lakewood is 57-76 overall and 28-35 in the second half. The BlueClaws own the second-lowest batting average in the league, a .230 mark and have score just 460 runs, one more than last place Columbia. Their pitching staff has been better, earning a 3.89 ERA, good for 10th in the league. Lakewood is led by Malvin Matos, who has 10 homers to go along with a .254 batting average. The Blueclaws also have a host of strong pitchers such as Gilmael Troya and Mark Potter who have helped the club stay afloat this season.

MYSTERY BOBBLEHEAD: The mystery has been solved and you'll want to get to the park early Saturday. The first 1,000 fans through the gates beginning at 5:00 p.m. will get a special Paul "Ears" McNeal Bobblehead brought to you by Hagerstown CVB.

SUNDAY FUNDAY: It's the final Sunday Funday of the year! Kids club members can play catch on the field prior to the 2:05 p.m. game and afterwards all kids can run the bases for one final time this year!

TIM BURGER SPECIALS: Friday you can get a "Tim Burger or Cheeseburger" for just an extra $2. (add an extra burger patty for $2).

WEEKEND FOOD DEALS: Saturday/Sunday: Pulled Pork Sandwich with a side of chips for $7, Jumbo Pulled Pork Hot Dog topped with coleslaw for $8, Pulled Pork Nachos for $7!