Demeritte and Toussaint named M-Braves Players of the Year 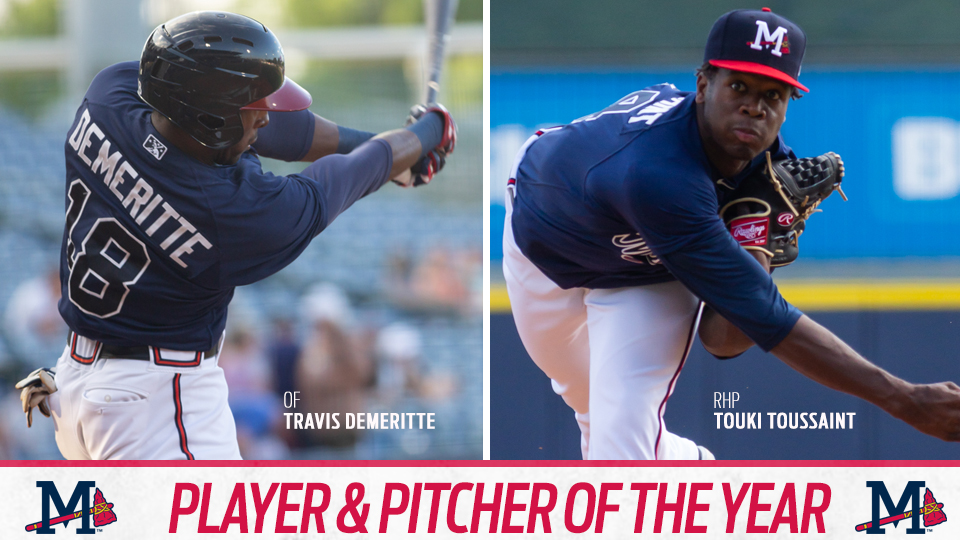 Drafted originally by the Texas Rangers in the first round (30th overall) of the 2013 draft out of Winder-Barrow (GA) HS, the Rangers traded Demeritte to Atlanta on July 27, 2016. Demeritte excelled this season in clutch situations, proven by his .294 batting average and 14 extra-base hits with runners in scoring position. He was named M-Braves Player of the Month by the organization in August after batting .265 with five home runs, four doubles, one triple, 14 RBI, 19 runs plus a .371 OBP.

The Pembroke Pines, FL native is one of 12 M-Braves alums to debut this season, and one of four starting pitchers. Toussaint made his made his major league debut in the first game of a doubleheader, August 13 vs. Miami, tossing 6.0 two-hit innings, allowing one run and two walks while fanning four. The No. 7 overall prospect for the Braves became just the third Atlanta pitcher over the last 110 seasons to go at least 6.0 innings and allow no more than two hits in his debut, joining James Parr (9/4/08 vs. WSH) and Armando Reynoso (8/11/91 vs. HOU). By earning the win in his major league debut, Toussaint became the third Braves starter to win his MLB debut this season, joining former Mississippi hurlers Mike Soroka (5/1 at NYM) and Kolby Allard (7/31 vs. MIA).

Riley was the Braves' Competitive Balance Round A selection (No. 41 overall) in the 2015 MLB Draft out of DeSoto Central High School in Southaven, Miss.

Last season the M-Braves were represented by Ronald Acuña Jr. and Mike Soroka as Braves Minor League Player and Pitcher of the Year.

The M-Braves will open the 2019 season on the road against the Tennessee Smokies, April 4-8, before commencing the 15th season at Trustmark Park against the Mobile BayBears, April 10-14.

2019 Season Tickets are on sale now! For more information, call the M-Braves Front Office at 601.932.8788 or 888-BRAVES4, or visit www.mississippibraves.com. Individual tickets start at just $6!