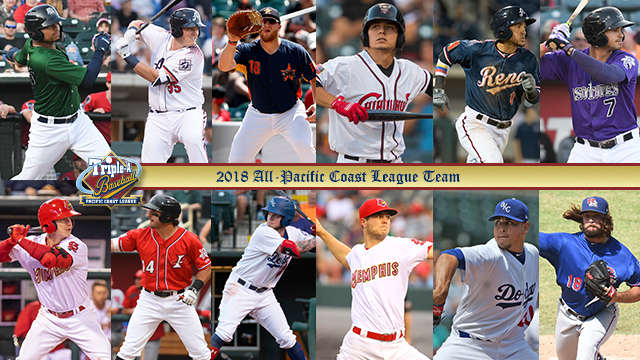 ROUND ROCK, Texas - With a week left in the 2018 regular season, the Pacific Coast League released Monday its end of the year All-Star team. The 12-man roster, which is assembled through a vote of the League's field managers, media representatives and broadcasters, features three players on MLB Pipeline's Top 100 prospect list - Luis Urias (No. 22, El Paso), Alex Verdugo (No. 28, Oklahoma City) and Tyler O'Neill (No. 47, Memphis).

Urias, elected as the team's second baseman, is joined in the infield by first baseman A.J. Reed (Fresno), shortstop Ildemaro Vargas (Reno) and third baseman Josh Fuentes (Albuquerque). All four, along with four others, also received mid-season All-Star honors. Reed's PCL-leading 27 home runs and 106 RBI has helped Fresno lock up the Pacific Northern Division. His infield corner mate Fuentes, who was the PCL's BUSH'S® All-Star MVP, has enjoyed a breakthrough year; he sits at or near the top of numerous offensive categories, including topping the circuit in hits (166) and total bases (261). Vargas recently saw his club-record 35-game hitting streak come to an end, the fifth longest streak in the PCL's 116-year history.

O'Neill, Verdugo and Albuquerque's Mike Tauchman make up the outfield. The Cardinals prospect, O'Neill, has been among the most prolific home run hitters in the League for a Memphis team that has sewn up their second consecutive American Southern Division. Verdugo (.335) and Tauchman (.326) are part of a tight race for the PCL's batting title.

Joining the rest of the position players are catcher Christian Bethancourt (Colorado Springs) and designated hitter Kevin Cron (Reno). Bethancourt has posted an .822 OPS in 94 games as the primary catcher for a Sky Sox team in the hunt for the American Northern title. The Diamondbacks farmhand, Cron, has driven in the second-most runs in the League (91), even though he missed the first month of the season while recovering from an injury.

Dakota Hudson , tabbed by MLB Pipeline as St. Louis' No. 4 prospect, is the right-handed starting pitcher. The Mississippi State product is the PCL's ERA (2.50) and wins (13) leader, despite not appearing in a Triple-A game in over a month because of his first Major League promotion. The team's left-handed starter is Oklahoma City's Manny Banuelos . The southpaw has recorded a 3.59 ERA and has struck out 126 hitters in 105.1 innings on the campaign. Round Rock Express hurler R.J. Alvarez , who has saved more games than any other PCL pitcher this season (23), was named the team's reliever.