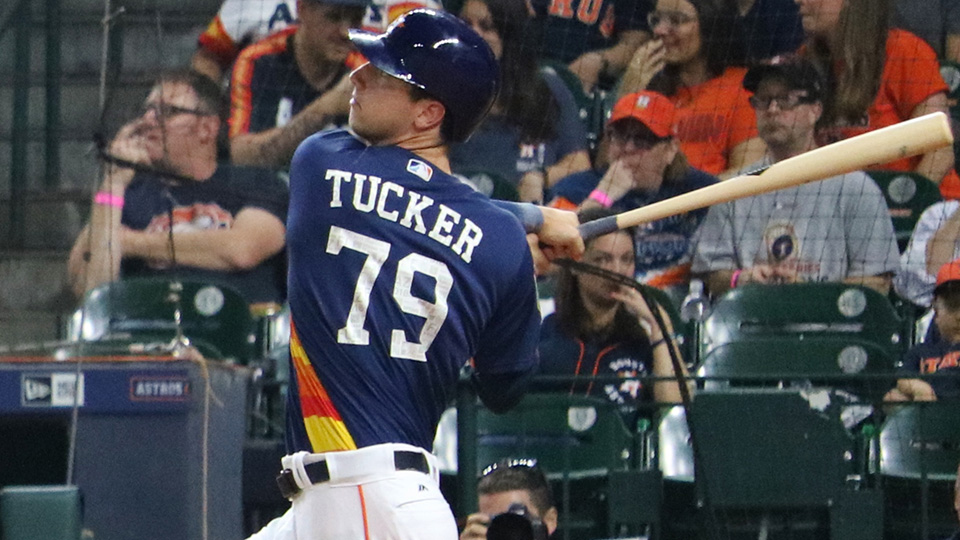 Kyle Tucker demonstrated why he's one of Houston's most touted prospects throughout Spring Training. He's showing no signs of slowing down with Triple-A Fresno.

After delivering two hits and a walk on Opening Night, MLB.com's No. 16 prospect drilled his first Pacific Coast League homer and doubled Friday in the Grizzlies' 8-4 loss to Reno at Greater Nevada Field.

The blast highlighted the 21-year-old's power, traveling a projected 448 feet to right-center. The 2-0 pitch from Reno right-hander Michael Blazek caught far too much of the plate, and the Astros' second-ranked prospect made him pay.

"If you're not biting on those pitches just off the plate, [pitchers are] going to have to end up throwing it over the plate at some point and that's when you really want to attack," Tucker told MiLB.com last month. "And that's what I've been trying to do. That's what I want to do moving forward."

Tucker batted .409 with a 1.256 OPS during Spring Training, hitting four home runs. The fifth overall pick in the 2015 Draft picked up the moniker "Ted" from his teammates, which derived from a Ted Williams comparison bestowed on him by a television analyst.

Between Class A Advanced Buies Creek and Double-A Corpus Christi in 2017, Tucker hit .274 with a career-high 25 homers.

The Tampa native has all the tools  to be the shining star of the system, and the organization is expecting a big season out of Tucker in the hitter-friendly Pacific Coast League. Through two games, he's 4-for-8 with two extra-base hits and a 1.556 OPS.

"I'm going to be excited to watch him play in the big leagues as soon as possible," said Omar Lopez, who managed Tucker at Class A Quad Cities in 2016. "And I think he has a pretty good chance if he keeps doing what he's been doing."

D-backs No. 25 prospect Jack Reinheimer homered and drove in two runs, while 14th-ranked Socrates Brito delivered a two-run triple for Reno. Aces starter Taylor Clarke (1-0), ranked seventh in the system, struck out nine over five scoreless innings for the win.

Chris Bumbaca is a contributor for MiLB.com based in New York. Follow him on Twiter @BOOMbaca. This story was not subject to the approval of the National Association of Professional Baseball Leagues or its clubs.