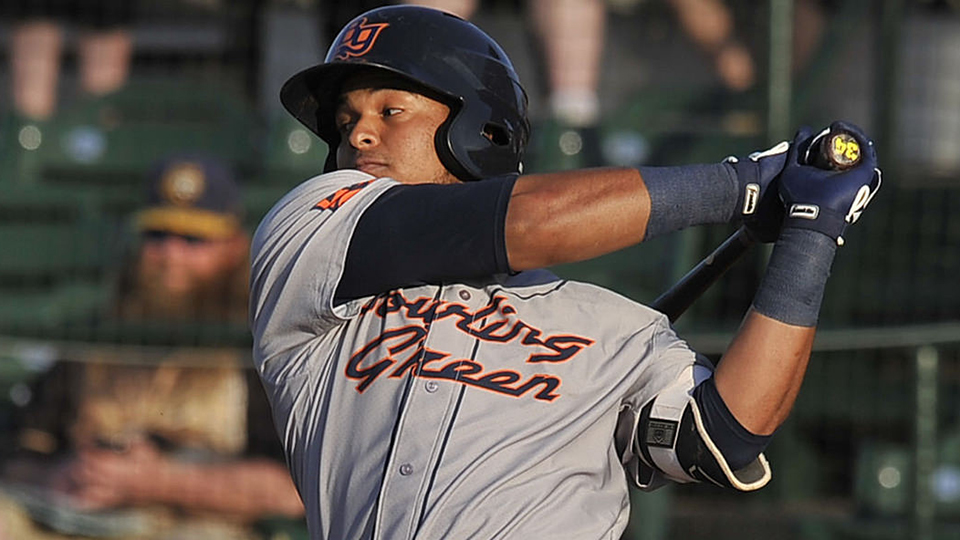 Rays C Ronaldo Hernandez  , Class A Advanced Charlotte: 3-for-5, 3 R -- For the first time this season, Hernandez scored three times in a game. Tampa Bay's No. 7 prospect also stretched his hitting streak to eight games,  five of which were multi-hit efforts. MLB.com's No. 89 overall prospect was batting .188 after an 0-for-4 showing on May 5. Less than two weeks later, the fifth-ranked catching prospect is batting .260/.272/.350. A season ago for Class A Bowling Green, Hernandez posted a .832 OPS with 21 homers and 79 RBIs. He has gone deep twice this season with 13 RBIs in 100 at-bats, so while the power may not have translated to the Florida State League yet, there's precedent for power in the Colombia native's game.

Rays P Shane McClanahan  , Class A Bowling Green: 5 2/3 IP, 9 K, 1 ER, 5 H, 3 BB -- A McClanahan-Hernandez battery in Charlotte could be looming. A mistake pitch to Ruben Cardenas  leading off the fourth that cleared the right-field fence accounted for the only real damage against the Rays' No. 11 prospect, who had to navigate plenty of traffic on the basepaths. The 31st overall selection in last year's Draft has fanned 34 batters over 21 2/3 innings in his last four starts and has yielded two earned runs over his last three outings (16 frames). Opponents have not scored more than once against him in five of eight starts to begin the year.

Rays RF Jesus Sanchez  , Double-A Montgomery: 2-for-4, HR, BB, 3 RBIs, 3 R -- After a slow go of things in the Southern League at the end of last year, Sanchez has hit consistently for the Biscuits. On Friday, he smashed his first homer of the month with a three-run jack in the ninth inning. The fourth-ranked Rays prospect has 11 multi-hit games and a .298 average this season and leads the circuit with 29 RBIs.