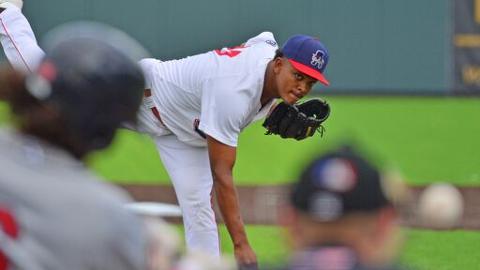 The Doubledays (27-44) opened up their last road trip of the season by splitting their doubleheader against the Crosscutters (30-41) on Wednesday.

Game 1 quickly turned into a pitcher's duel after it became clear that the Auburn's Eddy Yean and Williamsport's Leonel Aponte were on their A Game. Yean, fresh off his New York-Penn League debut where he went five innings of two-run (one earned) ball against the Black Bears, faced the minimum over the first two innings while Aponte did the same. But unfortunately for the Doubledays, Yean bent first.

Back-to-back one-out hits in the third inning put a Crosscutters runner in scoring position for the first time, and things quickly escalated as a walk loaded the bags. An aggressive Jake Holmes took the first pitch he saw right back up the middle to score a pair, and advanced to second base on a throwing error after Jake Alu - who nabbed a line drive for the second out - tried to double him off at first base. Hunter Hearn struck to end the inning, but two runs were all that Williamsport needed to take the shortened seven-inning game.

Aponte put up zeros on the scoreboard during his last two innings of work while Rafael Carvajal notched a two-out save to close the game. The Doubledays threatened in the ninth as runners at the corners with two outs quickly became runners second a third after a wild pitch, but Carvajal was able to induce a weak infield pop-up and strike out Anthony Peroni for the third out.

Game 2 proved to be just as much a pitcher's duel as the first as Gilberto Chu exchanged scoreless innings with Williamsport starter Hsin-Chieh Lin over the first four innings. Lin gave first, however, as a wild pitch, coupled with a throwing error by catcher Mitchell Edwards, scored a run all the way from first base in the fifth inning. His offense quickly bailed him out, however, as Corbin Williams notched a game-tying triple at the bottom of the inning to retie the game.

But the Crosscutters couldn't bounce back in the sixth as the Doubledays scored two unanswered runs off of new pitcher Brian Marconi. Jake Randa opened the inning with a walk and advanced to second on an Onix Vega walk. Both runners were put into scoring position on a groundout, which allowed for Jake Alu to knock in both on a game-winning RBI single.

In his second inning of work, Fausto Segura had his back against the wall early as a walk put two runners on with only one out. He worked himself out of the jam, though, by striking out the next batter getting Bryson Stott to ground out to end the game.

The Doubledays will be back in action on Thursday against the Crosscutters at 7:05 PM.