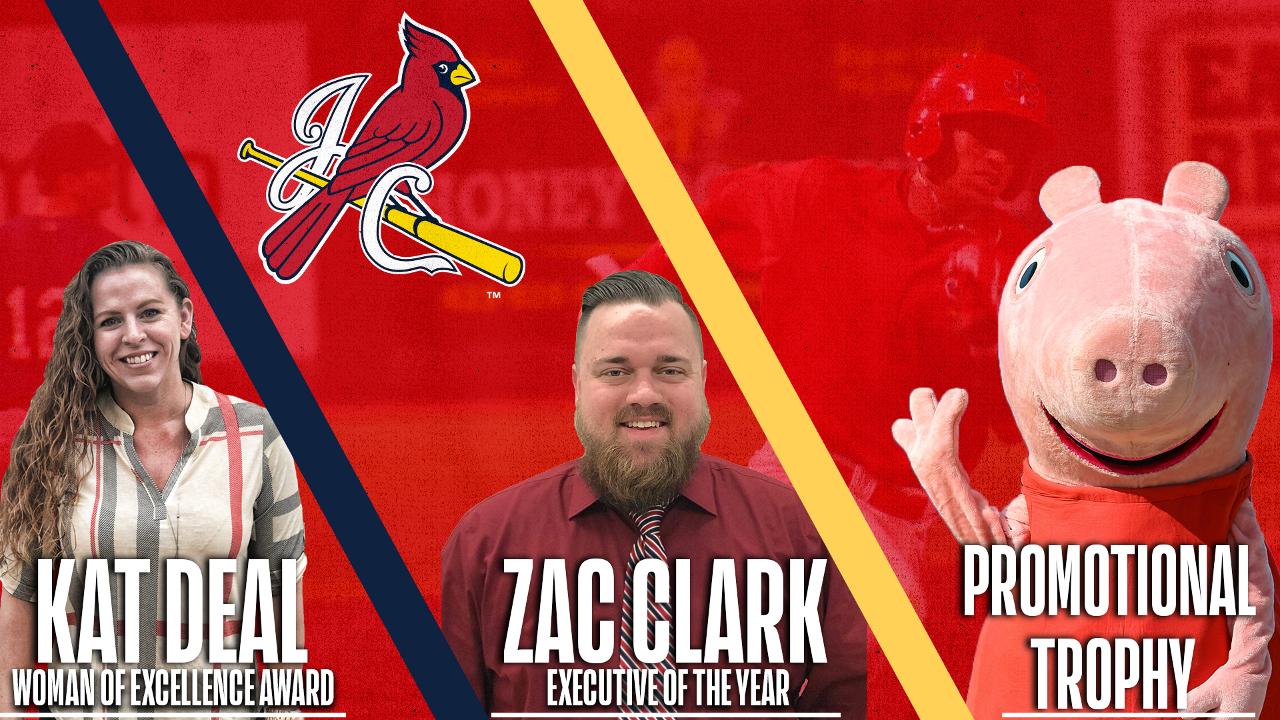 JOHNSON CITY- The Appalachian League has announced the recipients of the league's annual awards, voted on by the general managers of each club in the Advanced Rookie league. The Johnson City Cardinals were selected for three awards including the Woman of Excellence Award, Executive of the Year, and the Promotional Trophy.

In Kat Deal's first season with the Johnson City Cardinals, she has been honored with the Woman of Excellence Award. The Appalachian League Woman of Excellence Award is presented to the woman who has made outstanding contributions to her club, community, league, and/or baseball. Kat brought 7 years of experience in baseball with her after spending time in Bluefield and Palm Beach. In her first year with the club she shattered both her group sales and sponsorship sales goals leading the franchise to a record sales year across the board. Kat is a board member for the Boys and Girls Club of Washington County and Johnson City. In addition to that board she is also an active member in Rotary, the Chamber of Commerce, and Young Professionals of the Tri-Cities.

"It could sound cliché to say this, but this award is an incredible honor and I am extremely humbled and thankful to receive such recognition," stated Johnson City Cardinals Assistant General Manager Kat Deal. "To be a part of this team and to have a mentor in Zac Clark- who exemplifies the leadership qualities that I strive to have and has received the executive award for his outstanding year -is a feeling of excitement for what is to come and gratefulness for the team we are a part of here in Johnson City. I hope we continue to be a strong part of our community and show our dedication to the sport and making it great for our fans and community year after year. It is an honor to receive this award and an even bigger honor to be a part of this team, league and this City."

In his second season at the helm in Johnson City, Cardinals General Manager Zac Clark has been named the 2019 Appalachian League Executive of the Year, awarded to the executive who, in the estimation of his/her peers, has made the most valuable contribution to his/her club and/or league. Clark led the team to another franchise single-season attendance record, as 80,612 fans attended TVA Credit Union Ballpark in 2019. Under Clark's leadership, the Johnson City Cardinals continue to be a staple in both Johnson City, and in the Minor League Baseball industry as a whole.

For the third consecutive season, the Johnson City Cardinals have been named the recipient of the Appalachian League Promotional Trophy, awarded to the club that demonstrates outstanding and creative marketing and promotional work. The Cardinals promotional schedule included premium giveaways, as well as theme nights such as Margaritaville Night, Star Wars Night, several celebrity appearances, and much more. The mix of promotions helped Johnson City attract returning fans as well as fans who spent their first night at TVA Credit Union Ballpark during the 2019 season. As the winner of the 2019 Appalachian League Promotional Trophy, Johnson City will be nominated for MiLB's Larry MacPhail Promotional Award.

"We are extremely honored and proud to accept these awards on behalf of the Appalachian League," added Johnson City Cardinals General Manager Zac Clark. "Winning the promotional trophy for the third season in a row is a testament to our staff's creative and energetic take on the experience we are trying to provide for the community here in Johnson City. The Woman of Excellence award is a new award for the Johnson City Cardinals, and we could not be more excited for Kat Deal. Kat is the ultimate team player and in her first season she came into Johnson City with an unmatched work ethic, enthusiasm, and professionalism that allowed her to shatter every working goal in her path this season. Lastly the Executive of the Year award is an unbelievable honor and we can't thank our counterparts in the league for honoring us with this award for a second consecutive season. To the Johnson City Community, thank you again for everything you do to help make Johnson City and TVA Credit Union Ballpark such a special place for Minor League Baseball."