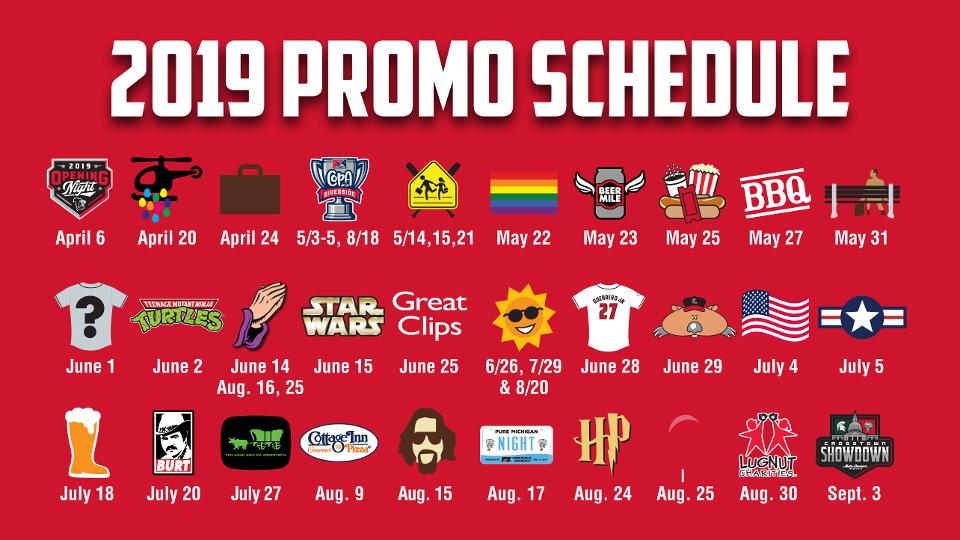 LANSING, Mich. - The Lansing Lugnuts officially released their 2019 Promotional Schedule, headlined by the return of the Golden Bobblehead award-winning Backyard Baseball Night, and joined by all new, exciting theme nights, such as Oregon Trail Night, plus giveaways, fan-favorite promotions and more!

Then in the heat of the summer, the 4th of July celebration will have double the fireworks, the Lugnuts' LAFCU Fireworks plus the City of Lansing's Fireworks, perfectly paired with a classic night at the ballpark. Nothing is more American than baseball, hot dogs and fireworks on the 4th of July!

And the regular season concludes with one of the community's greatest baseball traditions: the 13th Annual Crosstown Showdown presented by Auto-Owners Insurance, with the Lugnuts taking on the Michigan State Spartans in the battle of Lansing vs. East Lansing!

4. Backyard Baseball 2 - June 29
Back by popular demand! Backyard Baseball Night 2 will return June 29 to Cooley Law School Stadium. This time, the fans get to pick who will be the bobblehead giveaway between Stephanie Morgan, Achmed Khan, Pete Wheeler and Kenny Kawaguchi, powered by MI Student Aid.

3. Oregon Trail Night - July 27
We will have everything you need once you make the journey to Cooley Law School Stadium, but be careful crossing the Grand River. July 27 will be Oregon Trail Night with a Daniel Norris Colonial Bobblehead giveaway!

2. Harry Potter Night - August 24
The magic is back at Cooley Law School Stadium on August 24. Join Harry, Ron and Hermione as the stadium is transformed with Witchcraft and Wizardry. Enjoy a butterbeer, Quidditch, photo-ops, trivia and more! PLUS, we have a SECRET giveaway for the first 1,000 fans.

Dog Days of Summer - Every Wednesday Home Game
- Bring your dog to the ballpark and enjoy some baseball.

Wednesdays - Dog Days of Summer: Bring your dog to the ballpark every Wednesday!