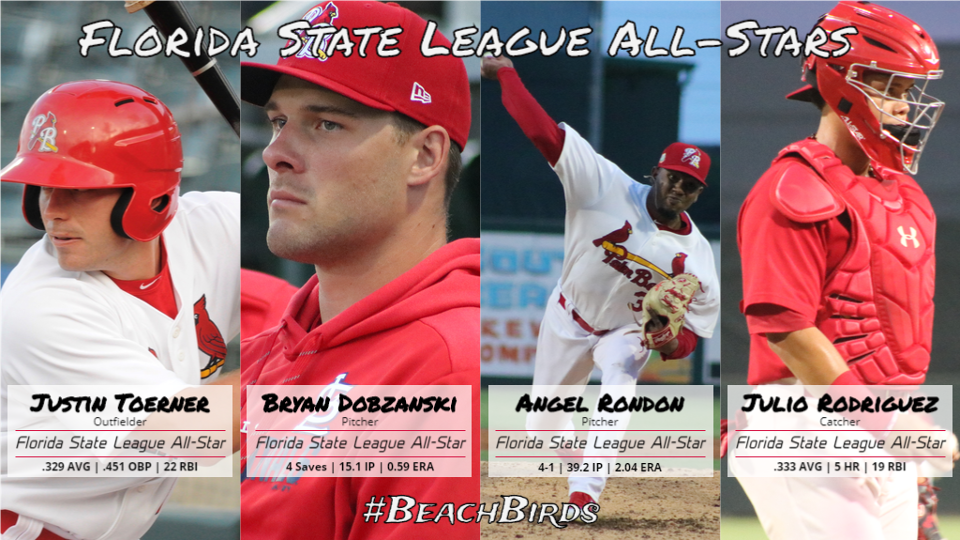 The Palm Beach Cardinals announced on Friday the players that will be representing the club at the 2019 Florida State League All-Star Game to be held at their home venue, Roger Dean Chevrolet Stadium, on Saturday, June 15th.

Behind the plate, catcher Julio Rodriguez will be one of just three catchers on the South Division squad. The 21-year-old leads the first place Palm Beach Cardinals with five home runs and has 19 RBI to go with his .339 batting average. He was named Florida State League player of the week for the period beginning on May 12th and will be participating in his first Minor League All-Star game.

The other position player to make the All-Star team for Palm Beach is outfielder Justin Toerner. The 22-year-old from Temecula, California got off to a hot start in April and earned Player of the Month honors for both the Florida State League and St. Louis Cardinals organization. Toerner leads the Florida State league in batting average (.329) and on-base-percentage (.451), and walks (30), ranks second in runs (30), and has amassed 22 RBI primarily out of the leadoff position.

On the mound, relief pitcher Bryan Dobzanski got his second Minor League All-Star nod. The right-hander ranks third in the league with a .59 ERA among pitchers with 10+ appearances, ranks second with 16 total appearances and fourth with 12 games finished. Through 15.1 innings pitched, the 23-year-old has struck out 17 batters and opponents are hitting just .135 against him.

A year after spending his 2018 with the Gulf Coast League, Perry DellaValle was named a Florida State League All-Star. The 23-year-old is 2-3 with a 2.29 ERA through 12 starts. He has 50 strikeouts on the season through 63 innings and will be making his first All-Star appearance.

Also making the All-Star squad but not participating due to a promotion to Double-A Springfield is Angel Rondon. The Higuey, Dominican Republic native was 4-1 with a 2.04 ERA in 39.2 innings before the move and had a team high 44 strikeouts and .142 BAA.

Tickets for the Florida State League All-Star Game are on sale now at the Roger Dean Chevrolet Stadium Ticket Office and online at Rogerdeanchevroletstadium.com.