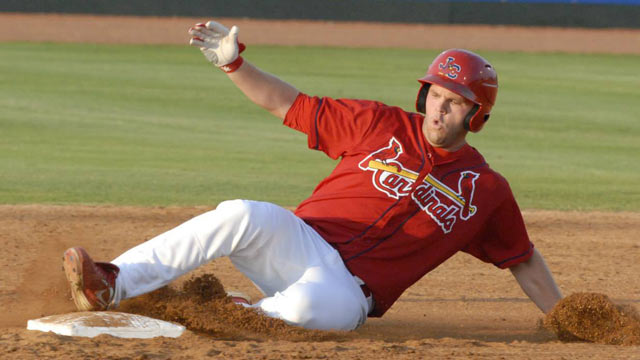 DANVILLE, Va. -- Casey Grayson picked the right time to kick it back into gear for the Johnson City Cardinals.

Grayson, the Appalachian League's RBI leader during the regular season, was at it again in the opening game of the circuit's best-of-3 Championship Series.

He doubled in both Johnson City runs in the Cardinals' 2-1 victory against the Danville Braves on Wednesday night at Dan Daniel Memorial Park, continuing a postseason surge for the first baseman.

Johnson City had the pitching to go with Grayson's clutch hit, with a pair of right-handers combining on a one-hitter. Starter Juan Perez struck out a season-high 10 batters in six innings and reliever Kender Villegas didn't allow a baserunner while striking out five across the last three innings.

The Cardinals are one victory away from their first league title since 2011.

After topping the circuit with 46 RBIs in 64 games, Grayson's bat has helped set the tone in the playoffs. He went 7-for-14 in three semifinal games against Elizabethton.

"Just swinging the bat well," he said. "I had a little rough stretch there near the end of the year. It looks like a beach ball right now."

Grayson said he had a few struggles in the NCAA regionals playing for Houston before snapping out of it. He hasn't waited in the Appalachian League playoffs.

His one-out double came after Casey Turgeon and Oscar Mercado opened the game with singles.

"I didn't think it was going to hold up," he said. "I've been trying to drive in runs all year."

"I thought it was important to get that early momentum," Rodriguez said.

The only hit for Danville, which was the league's top hitting team, was shortstop Ozhaino Albies' leadoff infield single in the fourth inning. His chopper was hit toward second baseman Casey Turgeon, whose throw to a covering Perez wasn't in time.

Perez, who turned 19 in July, faced only 13 batters across the first four innings, twice benefiting from double-play grounders.

"He has turned this into giving himself a chance," Rodriguez said of his right-hander, who had control problems in the spring.

Danville plated a run without a hit in the fifth when Tanner Kreitemeyer walked, Tanner Murphy was hit by a pitch and Kreitemeyer scored on a wild pitch by Perez.

"Give credit where credit is due," Danville all-star third baseman Jordan Edgerton said. "It was unfortunate we couldn't get a couple of good at-bats in a row."

Perez hadn't struck out more than seven in any previous outing.

"I guess you could say we made the most out of our hits," Danville manager Randy Ingle said. "Their pitching was locked in, for sure. We didn't have a whole lot of good (at-bats)."

The rest of the series -- with Game 2 on Thursday night -- will take place at Johnson City, where the Cardinals lost their lone playoff game.