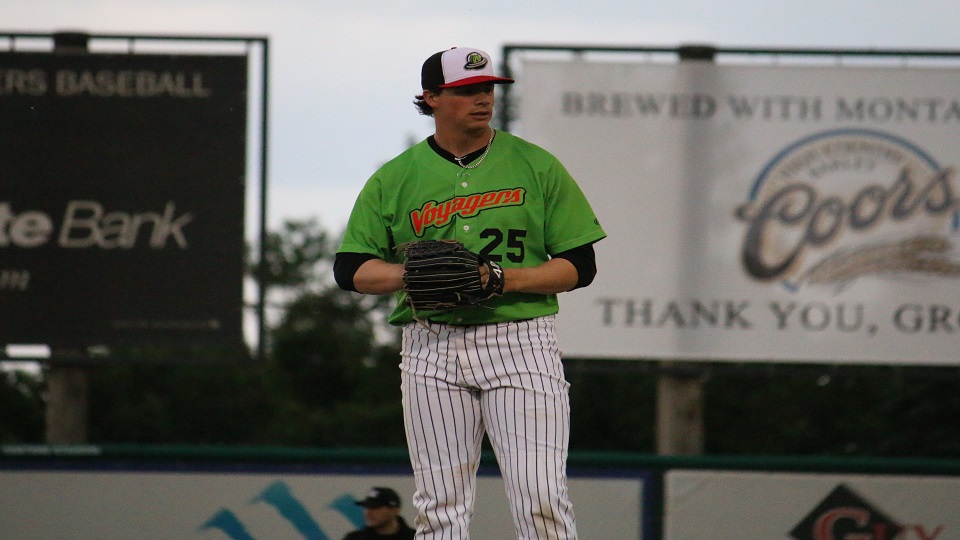 Sean Thompson worked into the ninth inning Monday in a home win over Billings.

Great Falls, MT-The Voyagers secured their first series sweep of the season Monday afternoon with a 4-1 Labor Day victory over Billings to close out the 2019 home schedule at Centene Stadium.

Great Falls (18-15, 33-37) has a new season-high winning streak of five, and finished the home slate with a 21-15 record. The Mustangs (21-13, 36-36) have lost a season-worst six in a row, and they went 16-22 on the road this season. The Voyagers posted a 10-10 record against Billings. 13 of the 20 games were decided by three runs or fewer. Great Falls is now 2.5 games back with just four to play. If Missoula beats Idaho Falls on Tuesday, the Voyagers will be eliminated from contention.

The Voyagers scored first for the third time in the series with a single tally in the bottom of the first. Harvin Mendoza started a two-out rally with a base hit to right. Luis Curbelo reached on an infield single to third, and a throwing error on the play allowed Mendoza to advance to third. Luis Mieses then scored Mendoza with a single lined into right.

Great Falls made it 2-0 with a run in the third. Kelvin Maldonado led off with a single to right. Harvin Mendoza promptly doubled into the right field corner and Maldonado raced home. The Voyagers plated a run in the fourth on a Joshua Rivera RBI single bounced into left over a drawn-in infield. It scored Tyrus Greene from third after he had led off with a single lined into left-center. Great Falls pushed the lead to 4-0 with its final run of the game in the fifth. Mendoza led off the inning with a single to right. After Luis Mieses singled to center, Ivan Gonzalez pounded an RBI single on the ground into right and drove in Mendoza.

The only run of the game for Billings came home in the sixth. Quincy McAfee lined a single to left with one out. With two outs, Tyler Callihan produced an RBI single to right. Callihan led off the ninth inning with a base hit to right and later reached second on a dropped fly ball in left. With two on and one out, pinch hitter Caleb Van Blake grounded into a 6-3 double play to end the game.

The Voyagers set a new season-high in base hits with 17. Seven Great Falls' batters recorded multi-hit games. Harvin Mendoza led the offensive attack with three hits, one RBI, and two runs scored. Mendoza reached base four times with a walk. Tyler Callihan went 2-for-4 with an RBI for Billings.

On the mound, Sean Thompson matched the team's longest start of the season for the win. Thompson (3-7) worked eight-and-a-third and allowed one earned run on seven scattered hits with a season-high tying six strikeouts and no walks. Miguel Medrano made the start for the Mustangs and took the loss. Medrano (3-4) went three-and-a-third and surrendered three earned runs on 10 hits with one strikeout and no walks. Pauly Milto notched his fourth save after a one-pitch relief appearance.

Great Falls heads out on the road after an off-day Tuesday. The Voyagers close out the regular season with a four-game series at Idaho Falls starting Wednesday night. First pitch is scheduled for 7:15. For 2020 Voyagers season tickets and promotional information, call 406-452-5311 or visit www.gfvoyagers.com.