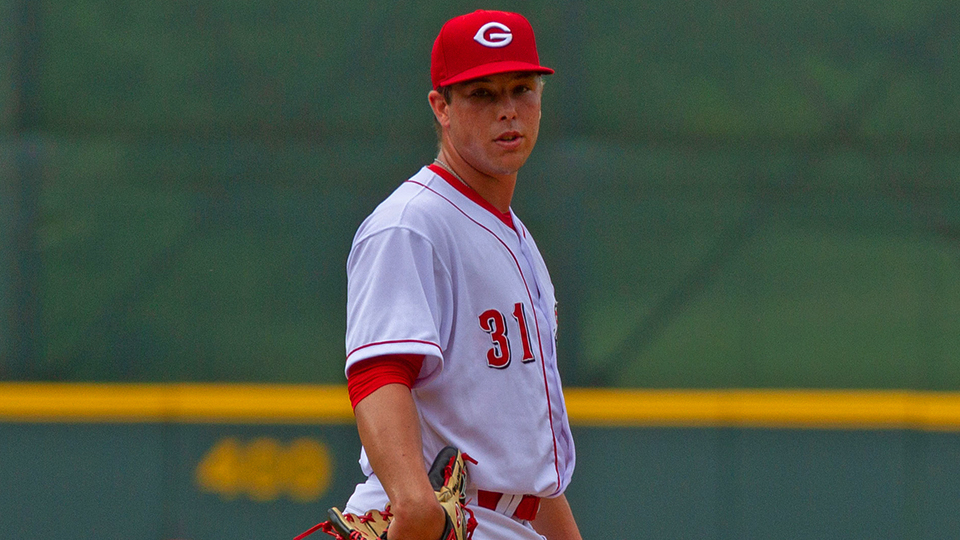 LHP Jacob Heatherly tied a career-best with eight strikeouts while allowing one hit over five scoreless inning en route to his first win of the year, as the Greeneville Reds topped the Danville Braves, 8-1, on Friday night at Legion Field. (Doug Gray / RedsMinorLeagues.com)

DANVILLE, Va. -- After RHPs Josiah Gray and Miguel Medrano 's strong performances on Thursday, LHP Jacob Heatherly took it up another notch on Friday. The 20-year-old surrendered one hit and struck out a career-high-tying eight, as the Greeneville Reds breezed past the Danville Braves, 8-1, at Legion Field.

With the victory, Greeneville won its first series of the month of August and sealed their first three-game winning streak since June 21-23. The Reds improved their overall record to 23-32. Danville's loss dropped their mark to 29-27.

In the sixth, the bats kept rolling. RF Reniel Ozuna (1-4, R, 2B, RBI, BB, SO) laced a one-out double down the right-field line and crossed the dish on a knock to center by Hernandez, expanding the lead to three. After a single by C Rob Boselli (1-5, SO) and a walk to Scantlin, Siani was plunked with the bases loaded - forcing home another tally - to put Greeneville in front, 4-0.

Danville would trim its deficit to three with an RBI single to center by LF Michael Mateja (1-3, RBI, SO), but that is as close as they would get.

The Reds put the game on ice, as they batted around - scoring four times - in the ninth. Subsequently after Siani's one-out triple, Finol hit a ground ball to short. The throw home was late and wide, as the 19-year-old scored, while the Venezuelan native moved to second on the error, giving the Reds a 5-1 edge. 1B Rylan Thomas (0-4, R, SO) was drilled and DH Brandt Stallings (0-1, R, BB) was given a free pass before Ozuna drew a bases-full walk to force home a tally to put Greeneville up, 6-1. Hernandez sealed the deal with a two-run double down over the third-base bag and into left to notch an 8-1 Reds lead.

Heatherly (5.0 IP, H, BB, 8 SO) was stupendous for the G-Reds. The former third-round pick yielded one hit over five scoreless innings - tying a career-high with eight punch outs - en route to his first win of the year.

Greeneville will go for their first series sweep of the year on Saturday night, as RHP Lyon Richardson (0-4, 6.45 ERA) - Cincinnati's No. 20 prospect according to MLB.com - is expected to take the ball. Danville is expected to counter with LHP Tanner Lawson (0-2, 3.80 ERA).

The G-Reds Pre-Game Show will kick off the broadcast at 6:45 p.m. ET, leading up to the 7:00 p.m. ET start at Legion Field. Saturday evening's contest can be heard on GreenevilleReds.com or via the TuneIn Radio and MiLB First Pitch apps.

Following the road trip, the Reds will return to open up a three-game, two-day series against the Kingsport Mets on Sunday, August 19. It will be a doubleheader against the K-Mets with first pitch slated for 4:00 p.m. ET. Fans are encouraged to arrive early, as the first 500 fans through the gates will receive a commemorate Tony Perez T-Shirt Giveaway.

Single-game tickets are still available and can be purchased online at GreenevilleReds.com or by calling the Reds' Ticket Office at (423) 609-7400.