Boselli & Olivo Drive in Two Each in Win 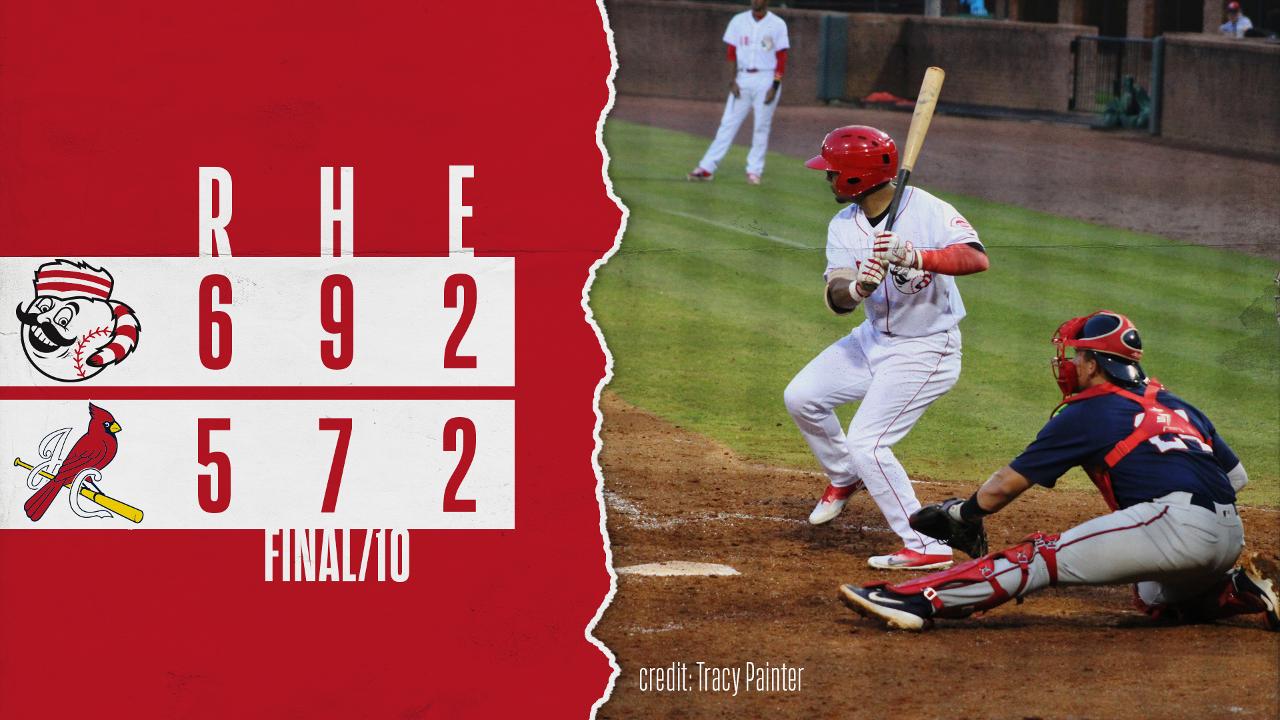 JOHNSON CITY, TN - The Greeneville Reds (6-9) snapped their season-long five game losing streak Wednesday night, with a 6-5 victory over the Johnson City Cardinals (9-5) in ten innings at TVA Credit Union Ballpark. Peterson Plaz's RBI- single in the top of the tenth scored Mike Spooner, and gave the Reds their sixth win of the year.

The Cardinals started the scoring in the first. RHP JC Keys hit Mateo Gil with one out, and with two-outs, Chandler Red- mond's RBI-double gave Johnson City the lead. Garrett Wolforth's sacrifice fly with the bases loaded in the second tied the game.

Johnson City scored two in the bottom of the second to retake the lead. Victor Garcia opened up the inning with a single off Keys and moved to second on Spooner's error in right field. Terry Fuller's RBI-triple gave the Cardinals the lead. With two- outs, Jhon Torres reached on a dropped third strike and a Robert Boselli throwing error, allowing Fuller to score from third.

Cristian Olivo led off the fourth with a single, and scored on Boselli's game tying, two-run home run to left field off RHP Dal- ton Roach. With two outs and runners on the corners in the fifth, Torres scored on Boselli's passed ball to give the Cardinals a 4-3 lead.

Greeneville took their first lead in the eighth. After Tyler Callihan reached on a fielder's choice for the second out, Roach walked Allan Cerda to extend the inning. RHP Dylan Pearce then came on, and surrendered a go-ahead two-out, two-run double to center field to Olivo.

LHP Alec Byrd (W, 1-0) came on for the ninth and gave up a leadoff single to Victor Garcia. He was then lifted for pinch- runner Diomedes Del Rio. Del Rio stole second as Byrd struck out Carlos Soler for the second out, and scored the tying run on Raffy Ozuna's RBI infield single.

Spooner began at second base for the Reds in the tenth, moved to third on a passed ball, and scored the winning run on Plaz's RBI-single off RHP Tyler Peck (L, 1-1). Johnson City's bonus runner got to third base after a one-out wild pitch, but Byrd struck out the final two to end the game.

Greeneville will head home to begin a three game series with the Bristol Pirates at Pioneer Park. LHP Jose Salvador (0-2, 6.94) will get the ball for the Reds against RHP Dante Mendoza (0-0, 4.50). First pitch is scheduled for 6:30.

Thursday night we will celebrate Independence Day with a huge fireworks display following the game.