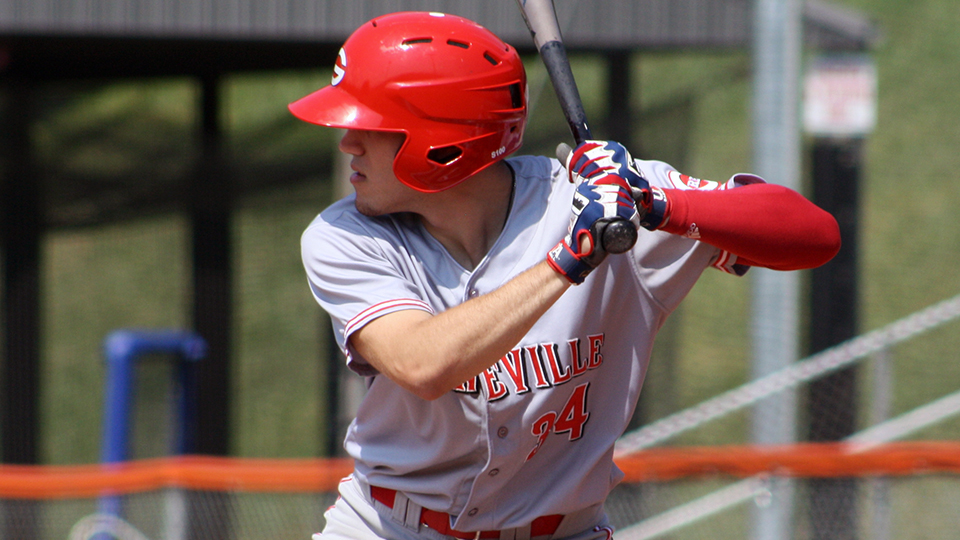 CF Mike Siani hit a go-ahead two-run home run in the eighth and drove in the game-winning run in the 10th, as the Greeneville Reds defeated the Elizabethton Twins, 3-2, in 10 innings on Thursday night at Joe O'Brien Field. (Johnny Painter / Greeneville Reds)

ELIZABETHTON, Tenn. -- After going 1-for-8 against left-handers through his first ten games, CF Mike Siani came through against a southpaw twice in the late innings. The 19-year-old delivered a go-ahead home run in the eighth and brought in the winning run in the 10th, as the Greeneville Reds topped the Elizabethton Twins, 3-2, in 10 innings at Joe O'Brien Field on Thursday night.

With the victory, Greeneville reaches the double-digit win plateau with a 10-17 record. Elizabethton's loss drops them to 17-10 on the campaign.

Tied at two headed into extras, the Redlegs started with DH Brandt Stallings (0-4, R, 2 SO) at second base. SS Miguel Hernandez (3-4, R, SO) laid a bunt down the third-base line, but the throw took the second baseman covering off the bag, allowing both runners to stay aboard. After a fielder's choice, Siani (1-4, R, HR, 3 RBI, BB) hit a ground ball to second. Elizabethton managed to get the force at second, but due to Siani's speed the E-Twins rushed and dropped the ball on a possible throw to first, allowing Stallings to score the go-ahead run, giving the Reds the lead, 3-2.

In the bottom of the inning, RHP Cory Heitler (1.0 IP, H) entered to try and seal the deal. With the automatic runner at second, 2B Yunior Severino (2-5, R) scorched the second pitch of the inning to first. 1B Rylan Thomas made a leaping snag and threw to second to force the runner for a double play. Following a two-out single, Heitler induced a groundout to short, concluding his first professional save.

Elizabethton held a 1-0 lead through a majority of the contest courtesy of a solo home run in the bottom of the fourth by 1B Chris Williams (1-5, R, HR, RBI, SO) - his league-high-tying eighth of the year.

Thanks to Siani, Greeneville was able to erase that deficit in the top of the eighth. Hernandez started the attack with a single to right, but a failed sacrifice bunt could not move him into scoring position. On a 1-0 offering, the fourth-round pick lofted a high fly ball to deep right field. The shot carried over the tall green fence for a two-run home run - the first of his professional career - to put the Redlegs in front, 2-1.

However, the Twins managed to tie the game in the bottom of the eighth. Following a single by Severino and a walk to DH Ryan Jeffers (1-4, BB), RF Trevor Larnach (1-3, RBI, BB, SO) snuck a single through the right-side. The throw to the plate was just a tad offline, allowing Severino to score, tying the game at two.

Despite the blown save, RHP Connor Bennett (1.2 IP, 2 H, BB, 2 SO) made sure Elizabethton never regained the lead, hurling 1.2 scoreless frames for his first win in a Greeneville uniform. It was a rough night for LHP Zach Neff (3.0 IP, 3 H, 3 R, 2 ER, BB, 3 SO), as he surrendered all three runs, taking his first defeat of the campaign.

Both starters faired well, but neither received a decision. Reds RHP Alexis Diaz (4.0 IP, 5 H, R, ER, BB, 4 SO) lasted only four innings due to a high pitch count but yielded only one run. His counterpart - Twins RHP Andrew Cabezas (5.0 IP, 2 H, 3 BB, 4 SO) - tossed five spotless frames in his third start.

Greeneville will look to make it back-to-back series wins on Friday night, as RHP Ricky Karcher (0-1, 7.50 ERA) is expected to take the hill in the series finale. Elizabethton is set to counter with RHP Josh Winder (1-0, 1.69 ERA).

The G-Reds Pre-Game Show will kick off the broadcast at 6:45 p.m. ET, leading up to the 7:00 p.m. ET start at Joe O'Brien Field. Friday evening's contest can be heard on GreenevilleReds.com or via the TuneIn Radio and MiLB First Pitch apps.

Following the brief three-game road trip, the Reds will return home to Pioneer Park on Saturday, July 21 to kickstart a three-contest set against the Burlington Royals. Fans are advised to arrive early, as the first 350 patrons through the gates will receive a Lee Landers Bobblehead in honor of his upcoming retirement as Appalachian League President.

Season and single-game tickets are still available and can be purchased online at GreenevilleReds.com or by calling the Reds' Ticket Office at (423) 609-7400.