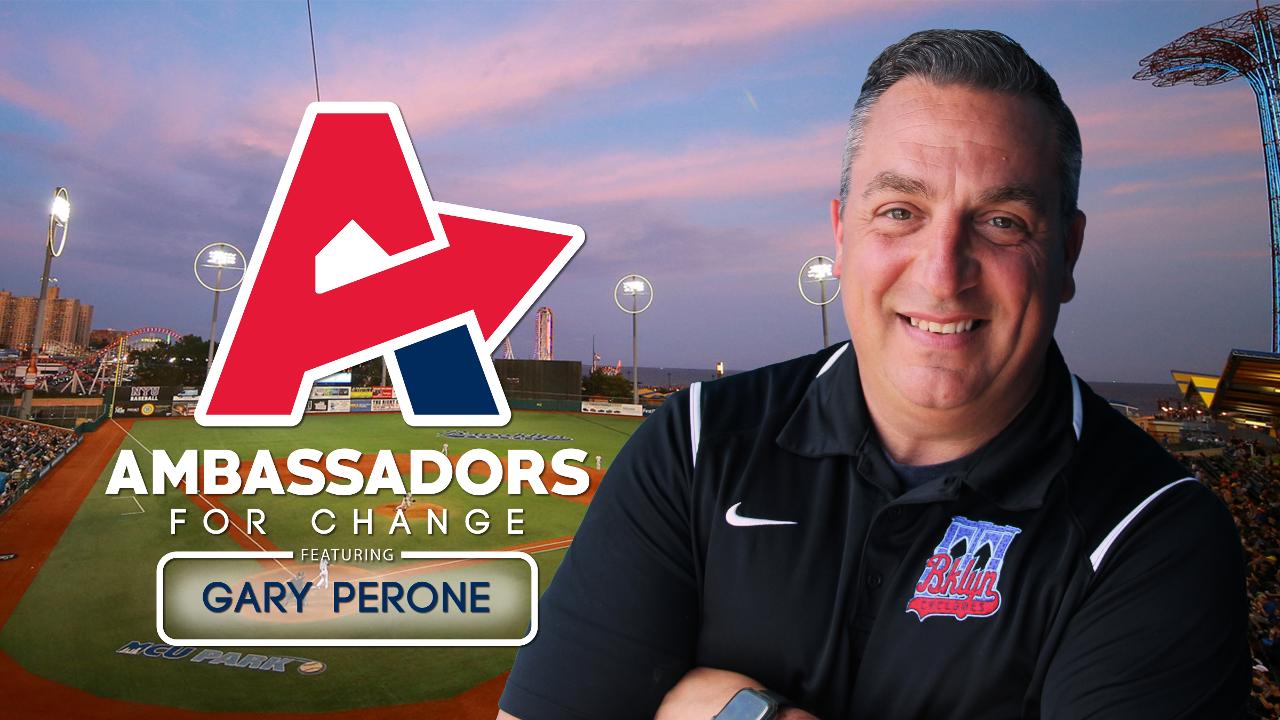 While conversations regarding diversity and inclusion happen daily in the Minor League Baseball office and among our 160 clubs, we recognize the need to do more to elevate the voices and stories of those who currently work in our industry. There is something uniquely powerful about sitting face-to-face with someone and listening to his or her experience.

The goal of this series is to spotlight the people, programs and stories in the baseball industry that champion diversity and inclusion and advance the mission of Minor League Baseball's diversity initiative. This week we profiled the Brooklyn Cyclones Assistant General Manager Gary Perone.

The Brooklyn Cyclones are considered pioneers in what is today known as MiLB Pride, having held one of the first Pride games in MiLB history in 2004. With an area as diverse as New York City and a ballpark only minutes from where the Stonewall riots took place 50 years ago, it makes sense for the Cyclones to lead the MiLB charge in celebrating the LGBTQ community.

Gary Perone, the Cyclones' assistant general manager, joined the team's front office in 2001 and has witnessed the development of its Pride events.

"Being Brooklyn-based and continuing the tradition of Brooklyn baseball that has existed for more than 100 years, we feel that our organization is part of the legacy of inclusion dating back to when Jackie Robinson integrated baseball," said Perone. "We hope that our fans see our Pride Night as a continuation of the tradition of open-mindedness for which this city, and particularly this borough, has been known."

Fans of all ages came out to the park for last years Pride night.

This year the team is hosting its first-ever Pride Party, an "upgrade" (as Perone put it) in comparison to the team's previous events. Perone acknowledged that since many teams now host a Pride Night, the Cyclones wanted to add a different feel to this year's event to make it even more of a celebration.

"This is a celebratory year with the launch of the MiLB Pride initiative, the 50th anniversary of the Stonewall riots and with World Pride being held here in New York City, so we felt it was important to do things a bit differently this year and really celebrate the community in a big way."

Leading up to its Pride Party, the team once again developed a committee of local LGBTQ leaders to help in the planning of the night, and it reached out to area nonprofit groups to provide resources and visibility to organizations serving the community.

Sandy the Seagull, the Cyclones mascot, dressed up in rainbow attire to celebrate the night.

"When hosting any identity-driven outing, I'd encourage every team to reach out to the community they're hoping to bring to the ballpark and to speak with their leaders and advocates. For us, we wanted to directly hear from New York City Pride leaders, and our committee has grown every year since we've hosted a Pride game. Its makeup includes leaders from the local nonprofits we work with, local TV personalities and local government officials. This year we're also working with the Major League Baseball Commissioner's Office for Diversity and Inclusion to join us in our initiative."

While New York City is often thought of as Mets and Yankees territory, the Cyclones realize that events like their Pride Party allow them to engage intimately with their community and introduce new and casual fans to their unique flavor of fun.

"We realize that every year that we host a Pride event we're often welcoming new fans to the ballpark for the first time. One of the most rewarding parts of this job is hearing peoples' reactions to the ballpark and to see them enjoying the show we put on. Most people are familiar with Citi Field or Yankee Stadium - even if they are casual fans - but coming to a Minor League Baseball ballpark is a uniquely different experience. I love to see the smiles and hear 'We can't wait to come back' as people leave. We want the LGBTQ community to feel welcome and to come back regardless of our game day promotions."

The team connected with local LGBTQ leaders and activists to sing the national anthem and throw out the first pitch.

The team has several activities planned for its Pride Party and will be involved in many of the city's Pride celebrations. In fact, the Cyclones will be marching in both the Brooklyn and New York City Pride parades before their Pride Party on July 11. The Cyclones look to continue their tradition of holding one of the longest running Pride celebrations in sports. Perone is looking forward to it, as there is one thing he knows to be true:

"There are three things everyone loves in New York regardless of race, gender, religion or sexual orientation: pizza, bagels, and baseball."

Benjamin Pereira is an associate with Minor League Baseball. This story was not subject to the approval of the National Association of Professional Baseball Leagues or its clubs.