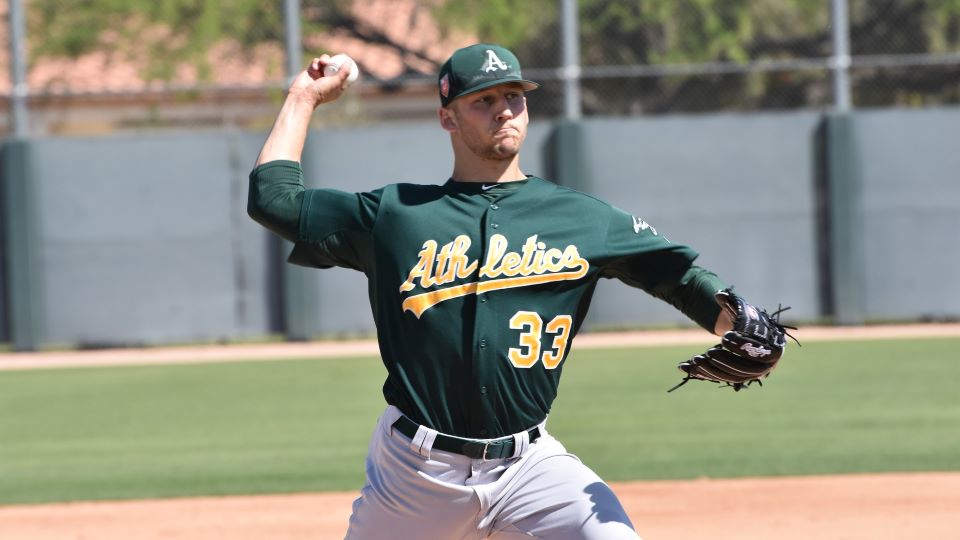 James Kaprielian has allowed three earned runs or fewer in all five of his starts for the Ports this year. (Jerry Kime/MiLB.com)

The road back to the mound has been a long one for James Kaprielian, but his success has been quick to return in his limited opportunities.

Once ranked as one of the top pitching prospects in baseball, Kaprielian's apparent fast track to the big leagues was derailed soon after the Yankees selected him 16th overall in the 2015 Draft. A forearm injury cost him nearly the entirety of his first full professional season. Then the former UCLA standout -- who led the Pac-12 in strikeouts in both his sophomore and junior season -- underwent Tommy John surgery the next year, sidelining him for two full seasons.

"It was pretty difficult, to be honest," Kaprielian said. "I pride myself in taking care of my body, working hard in the weight room and paying attention to small details. All that stuff is really important to me. You never think, 'Oh, I'm going to need Tommy John surgery one day.' It was totally out of my frame of mind."

But in his return to the diamond Kaprielian is showing the same signs of dominance that he did when he was first drafted.

"Regardless of the path I wanted to get to the big leagues, this is now my path," the 25-year-old right-hander said. "I have to be fully bought in to what has happened to me and try to continue to move forward."

He acknowledges that has been a bit of a struggle for him, considering he had never "had an injury that had sidelined him for a prolonged amount of time.

"This was definitely different and pretty hard to deal with," he said. "Being a competitor and the person that I am, it's really hard to get the ball taken away from you. ...  I'm still going through it. I really want to succeed in this sport. I love this game. I want to compete."

Through five starts in the California League. he's certainly doing so. He made one mistake in Thursday's outing, coming against the first hitter. He got ahead, 1-2, against No. 22 Mariners prospect Joe Rizzo, but ultimately walked him. But Kaprielian bucked down to induce three flyouts, which started a string of nine consecutive outs.

The A's highest-ranked right-handed pitcher extended his hitless-inning streak to six frames, having fanned three and walked one in three innings against San Jose on Saturday.

"The first few starts were more about getting used to a five-day routine again," Kaprielian said. "Feeling the adrenaline of the game, trying to find rhythm and timing... I'm finally getting that down. My velocity isn't quite back yet, but I'm trying to continue to just pitch."

The 6-foot-3, 210-pounder has a four-pitch arsenal consisting of a fastball, curveball, slider and changeup. His workload has been limited as he builds his strength back up, but in five starts amounting to 17 innings for the Ports, Kaprielian (1-2) holds a 3.71 ERA with 17 strikeouts.

"I feel confident commanding all four pitches, and although I've been out two years, that hasn't changed," he said. "I still feel like I can put that ball where I want to. When that velo does come back, which I'm confident it will, it's going to be fun." 2019 MiLB include

Kaprielian came to the A's from the Yankees along with eighth-ranked Jorge Mateo and Dustin Fowler as part of the Sonny Gray trade in 2017. He had already undergone Tommy John surgery at the time, so he hadn't made an appearance in the A's organization until May.

"It's a weird feeling getting traded," Kaprielian admitted. "It's nice that a team wants you and that a team is willing to give up one of their guys for you, especially someone like Sonny Gray.

"You feel a little out of place. It's nice to be on the other side of that now. I still feel like I'm coming out from the shadows. I have a lot to prove, but that kind of excites me at the same time. I know how hard I've been working through this time and how bad I want this."

Stockton cruised to victory thanks in part to a three-hit night from No. 15 prospect Nick Allen, who tripled, doubled twice, drove in two runs and scored twice. No. 24 prospect Alfonso Rivas also plated two runs.

Rizzo and No. 27 prospect Keegan McGovern both connected on solo shots in the sixth inning, and Ariel Sandoval went 3-for-3 with a double for Modesto.