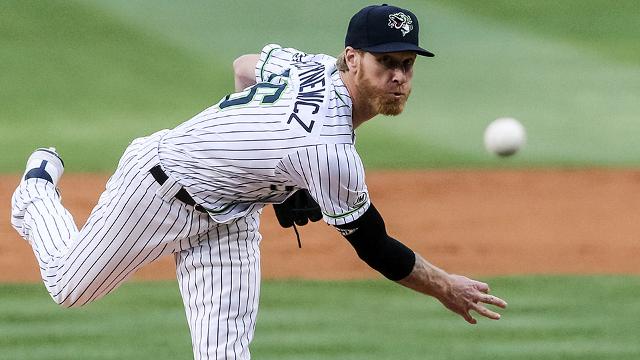 It had been more than a month since Mike Foltynewicz felt his elbow bark during Spring Training.

Beginning the season on the 10-day injured list to fully recover from what was termed right elbow discomfort, the Braves right-hander tossed a seameless bullpen session earlier this week before starting Triple-A Gwinnett's season opener Thursday. Foltynewicz showed no sign of the injury, firing five hitless innings with two strikeouts and two walks as the Stripers posted a 3-0 blanking of Norfolk on Opening Night at Coolray Field.

"My bullpen the other day was the best I felt all of this spring," he told reporters after his exit. "Went into this game, felt just like I did with the bullpen. Knock on wood, everything feels great."

Foltynewicz made a career-high 31 starts for the Braves last year but was shut down on Feb. 24. That forced him to begin the season in the Minor Leagues on a rehab assignment, which he passed with flying colors. If he continues to pitch like he did against Norfolk, he should be back in the big leagues in no time.

The 27-year-old retired the first five hitters before issuing a free pass to Jace Peterson in the second inning. Foltynewicz set down the next seven Tides before Orioles No. 2 prospect Ryan Mountcastle drew a leadoff walk in the fifth. He proceeded to coax a popup from Peterson for the first out, Mountcastle was caught stealing and Christopher Bostick struck out looking to close the night for the 2010 first-round Draft pick.

"The strikeouts weren't really there, but it was all about just getting comfortable out there tonight," Foltynewicz said. "I just felt really comfortable. I got ground-ball outs, a couple walks here and there, but it was kind of getting the rhythm down, getting my mechanics down. Arm-wise, everything else felt good."

"It was a little weird night with the ball and strike ratio," he told the Gwinnett Daily Post. "There are a few times in the past where it's [gotten] to that point, but it's all about how you stop the bleeding. It's getting out of those innings, taking a breath out there and ... I was in good control with the pace of the game."

Foltynewicz had not pitched in the Minors since 2016, when he made five starts for Gwinnett, and this was his first International League win since April 13 of that year.

Corbin Clouse recorded the next five outs and Elian Leyva retired all four batters he faced. Thomas Burrows picked up the save, despite giving up a run on two hits in the ninth.

Rafael Ortega went 3-for-4 with two runs and one RBI to pace the Stripers' offense.

Mountcastle, making his Triple-A debut, drove in the Tides' lone run with a single to left in the ninth. The knock came off Braves No. 18 prospect Thomas Burrows, who was also debuting in the IL on Thursday, recorded the save despite allowing the earned run on two hits and one walk.