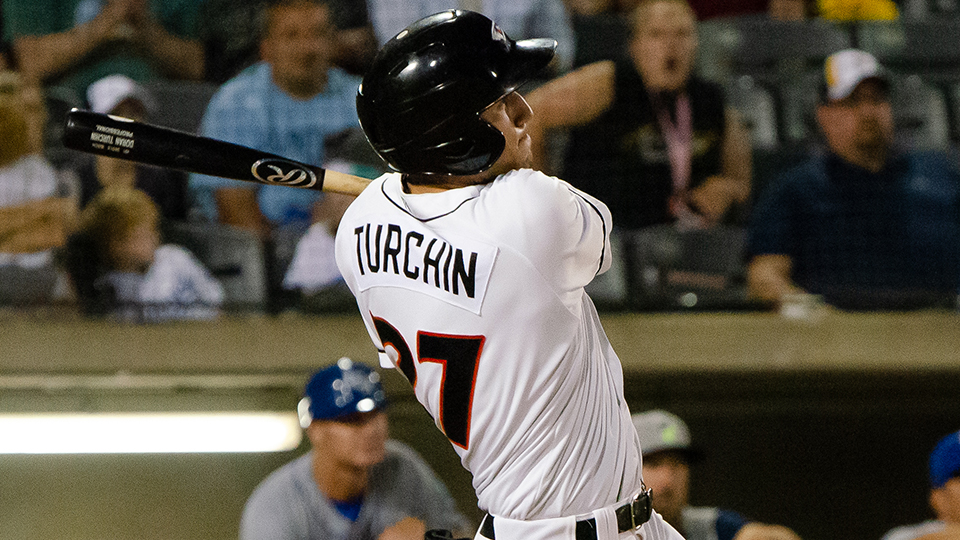 CHARLESTON, West Virginia -- For a moment, it looked like a Yankees prospect was going to steal the thunder from a talented group of Orioles pitching prospects at the South Atlantic League All-Star Game on Tuesday night.

As it turned out, an opposite narrative unfolded as Delmarva outfielder Doran Turchin roped a bases-clearing double in the bottom of the eighth inning off Charleston right-hander Alexander Vizcaino, lifting the Northern Division to a 6-2 win over the Southern Division in front of a sellout crowd of 6,237 at Appalachian Power Park.

"Coming into this, I just wanted to have fun," Turchin said. "It's nice, but the whole purpose was -- you work so hard for the first 70 games -- just to come and have fun and the experience of playing. There's some really special players around here."

Peralta was the fourth Shorebirds pitcher to throw an inning. Top Orioles prospect Grayson Rodriguez started for the North, and along with Delmarva teammates Drew Rom and Zach Matson dominated through first five innings. Each threw an inning, with the trio yielding a single and a walk.

"He had fun doing it," Turchin said of Peralta's experience and reaction to getting taken off the hook.

Peralta was quick to approach Turchin after he came home on a double by 14th-ranked Pirates prospect Lolo Sanchez to cap the North Division scoring.

"He said, 'You helped me out there,'" Turchin said.

The Shorebirds lead the SAL with a 3.09 team ERA, 708 strikeouts and 460 hits allowed. Ten pitchers limited the South Division to four hits.

Still, it looked for a while like North Division manager Dave Berg of the host West Virginia Power might have gone to the well once too often. Of four Delmarva pitchers, Rom was the only one to register a strikeout and get through his inning while facing the minimum. He acknowledged the back-and-forth between Orioles and Yankees prospects but was quick to return to the bigger picture.

"It's still, honestly, relatively early in our careers and there's plenty of time to think about who we're playing and what we have to expect from them," said Rom, Baltimore's 27th-ranked prospect. "At this point, it's all about developing, and who is going to get us to that [Major League] level doesn't matter a lot."

What does matter, he said, is his current team and its ability to succeed. The Shorebirds qualified for the playoffs by winning the first-half Northern Division title.

"We have some of our best pitchers on this team," he said. "It was just a lot of fun coming out here, competing against the best hitters and that we, as a whole staff, can come out and compete."

Lockridge earned some sense of validation with his homer. Before the game, the 2018 fifth-round pick out of Troy University finished second to Hickory's Curtis Terry in the All-Star Home Run Derby.

Turchin was named All-Star MVP, while Crawdads third baseman and Rangers No. 18 prospect Jonathan Ornelas earned Defensive Player of the Game honors. He also went 2-for-4 and scored a run. Hickory teammate Pedro Gonzalez was 2-for-2 with an RBI and Hagerstown shortstop Gilbert Lara contributed two hits and a run scored.

The teams combined to use 19 pitchers, with New Zealand native Kyle Glogoski of Lakewood getting the win. He struck one out in a perfect eighth, coming on with the score deadlocked at 2-2.

Vizcaino retired one batter and surrendered five runs on three hits and a walk. He struck out Lara swinging, but the pitch was high and wide, allowing Lara to reach and Greensboro's Rodolfo Castro to score the tying run.

Since the All-Star Game has pitted the two divisions, the North has a 19-18-3 lead in the series.

Derek Taylor is a contributor to MiLB.com. This story was not subject to the approval of the National Association of Professional Baseball Leagues or its clubs.