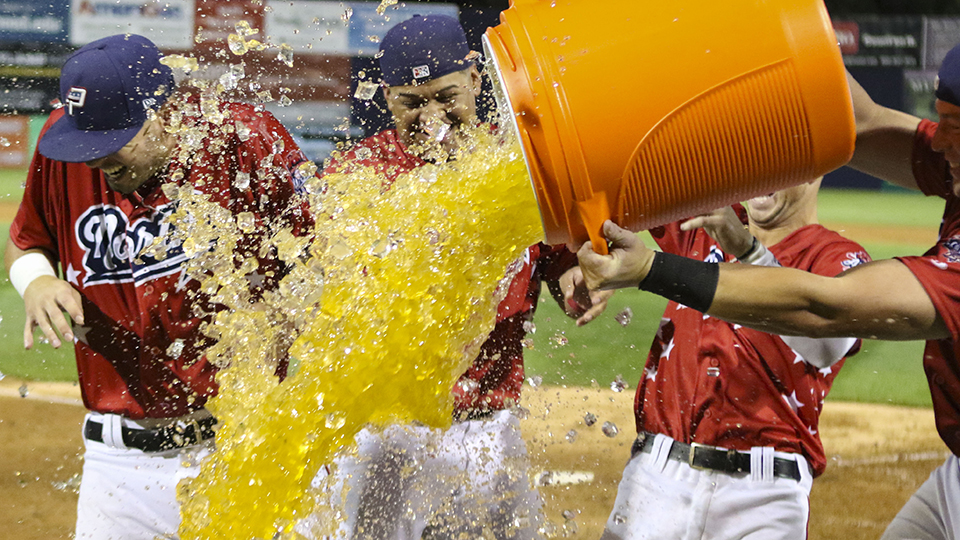 FREDERICK, Maryland -- Potomac's Nick Banks already was on a hot streak at the plate prior to Tuesday's Carolina League All-Star, hitting .405 in his previous nine games with 10 RBIs.

The outfielder from Texas didn't slow down against top-flight pitchers, going 3-for-4 with a go-ahead three-run homer in the eighth inning as the Northern Division rallied from a 5-0 deficit to an 8-7 victory before a crowd of 6,927 at Nymeo Field at Harry Grove Stadium.

"I didn't think I got it up high enough. He just kind of left it elevated," said Banks, holding the MVP trophy near home plate. "I definitely feel good. It is definitely a great experience. We were all having fun. We didn't let the momentum stop."

The left-handed batter sliced his shot down the left-field line off Cubs No. 18 prospect Paul Richan of Myrtle Beach to give the South an 8-5 lead in the eighth. Corey Julks of Fayetteville hit a two-run homer for the North in the top of the ninth, but Tyler Zuber of Wilmington got the last out for the save.

In 2016, Banks was drafted in the fourth round by the Nationals out of Texas A&M. The Carolina League showcase marked the third midseason All-Star appearance of his career. He also was named to the 2016 New York-Penn League and 2018 South Atlantic League contests, but couldn't recall doing much at the plate in those two.

"Nothing like this," he said, after getting a Gatorade bath from Potomac teammates and fellow All-Stars Jakson Reetz, Cole Freeman and Aldrem Corredor.

"That was pretty exciting," Freeman said of Banks' long ball. "He has been an aggressive hitter. It was fun. Obviously, we were down early."

Jarrett chooses own track with Orioles

The win at the home of the Orioles farm team was aided by Frederick infielder Willy Yahn (2-for-4, two RBIs) and outfielder Cole Billingsley.

"It was a blast," Yahn said. "It was so much fun to do it here in Frederick. It was a real treat."

The winning pitcher was Wilmington right-hander Tad Ratliff, who allowed two runs one one hit and a walk with four strikeouts in two innings.

Freeman led off the eighth with a walk and went to third as Yahn singled up the middle off Richan. That brought up fourth-ranked Royals prospect MJ Melendez of Wilmington, who struck out before Banks went deep.

The North scored four in the sixth to pull within 5-4. Boston's No. 25 prospect Pedro Castellanos of Salem delivered a sacrifice fly, Freeman had an RBI single and Yahn added a two-run knock. Then Billingsley tied the game with a two-out RBI single in the seventh.

The South scored four in the second to take a 4-0 lead. Two runs came in when Lynchburg lefty Juan Hillman threw wildly to home on a squibber in front of the plate off the bat of Down East's Yonny Hernandez. Brewers No. 10 prospect Payton Henry of the Mudcats, the No. 9 hitter in the lineup, increased the lead with a two-RBI single.

In the sixth, sixth-ranked Rangers prospect Leody Tavares of Down East -- the cousin of former big leaguer Willy Tavares -- grounded an RBI single to right field just after a light rain began to fall.

The North got on the board on a sacrifice fly from Salem's Ryan Fitzgerald and Freeman collected an RBI single to trim the margin to 5-2 against Winston-Salem's Will Kincanon in the sixth. Yahn followed with a two-run double to left to trim the lead to 5-4.

Frederick skipper Ryan Minor, a former third baseman for the Orioles, led the Northern squad. Despite a rough start for the Orioles, he said there remains a lot of energy among Baltimore prospects.

"You have to be excited to be in the Orioles organization right now," Minor said.

David Driver is a freelance writer from Maryland and can be reached at @DaytonVaDriver and davidsdriver.com. This story was not subject to the approval of the National Association of Professional Baseball Leagues or its clubs.