No. 18 prospect takes no-hitter into seventh for Fisher Cats 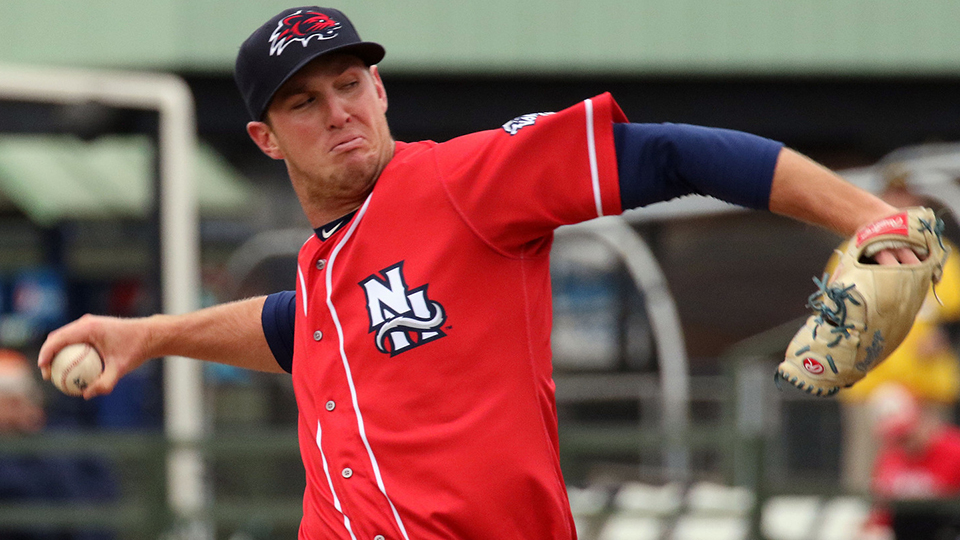 Timing is everything to Patrick Murphy these days. After putting up a 4.55 ERA in his first six starts of the season with Double-A New Hampshire, the Blue Jays' No. 18 prospect worked on slowing down his delivery and planned to concentrate on that adjustment in his pregame bullpen Thursday. The problem? It was a 11 a.m. start in Portland, meaning he'd have to be in the bullpen and stretching by 10:30 and actually throwing by 10:45.

"It was an early morning, for sure," Murphy said, "but nothing I couldn't handle."

The same could be said about Portland's lineup.

Murphy carried a no-hitter into the seventh inning and finished with one hit and one walk allowed while fanning seven over seven scoreless innings, leading the Fisher Cats to an 11-1 win over the Sea Dogs at Hadlock Field. It was his first scoreless start of the season in his seventh appearance.

"The season hasn't started out quite the way I would have wanted," Murphy said. "But I've been working a lot on command and establishing the fastball as best as I can. Once I got that down, I was able to mix in some off-speed and started getting into a groove as the game got on. It just took slowing down some things in my delivery to get that consistency with my fastball, and that's what you saw today."

After rehabbing Major Leaguer Dustin Pedroia reached on an error by shortstop Kevin Smith with one out in the first, the 23-year-old right-hander, who was sitting 96-97 mph with his fastball into the later innings, retired 13 Portland batters in a row before a walk to Marcus Wilson ended the run with a two outs in the fifth. His no-hit bid ended in the seventh when Brett Netzer opened the frame by lining a ball off the glove of first baseman Nash Knight and into right field for a single. Murphy stranded Netzer at first by getting Bobby Dalbec to ground out to short and Luke Tendler to fly out before capping his outing by striking Jerry Downs out looking on three pitches. Murphy did not allow a single Sea Dogs baserunner to reach scoring position and finished with 92 pitches, 66 of which were strikes.

One of the biggest indications of success for Murphy was getting back to his bread and butter: the ground game. He posted a groundball rate of 59.4% at Class A Advanced Dunedin last season but saw that number drop to 45.3% with New Hampshire before Thursday's game. Against Portland, he forced 10 groundouts compared to only two flyouts.

"I've been trying to work down in the zone as much as possible," Murphy said. "I've been struggling to do that with my fastball at times this season. Last year, I was really successful with it, but I've struggled to take it into games here to start the year.

"I feel like Double-A or anywhere really, you can't be pitching up in the zone like I was because they're going to go up and get it. After today, I feel like I'm at the point where I'm getting more consistent and I'm just going to keep on doing what I need to keep this going."

It has been a season of fits and starts for the 2013 third-rounder. After giving up five earned runs on seven hits in 2 2/3 innings against Hartford on April 20, Murphy owned a 6.11 ERA through his first four outings. He rebounded with eight strong innings (two hits, one earned run, seven strikeouts) at Reading eight days later and set a season high with eight K's over six innings while allowing three earned runs on six hits against Hartford on May 3. He now has a 3.72 ERA with 39 strikeouts and 11 walks in 38 2/3 innings with the Fisher Cats.

The Arizona native has been credited with turning himself from an oft-injured hurler into a workhorse capable of 152 2/3 innings last season, and an arsenal that includes a plus fastball, above-average curve and adequate changeup has made him a top-20 prospect in a solid Toronto system. But to become a Major League starter, he's focusing on smoothing out his delivery so he can make the most of his pitches.

"Even early on in that pregame bullpen, I'm trying to really slow things down in the way I'm pitching," he said. "I want to let my arm come through, not be on the front side too early or not trying to rush things. I'm taking my time even warming up to remind me of that. Slow things down, be on time with my delivery, allow myself to throw quality pitches and good things will come."

The win snapped a five-game losing streak for New Hampshire. All nine Fisher Cats hitters reached base at least once in the 11-run effort with Knight going 3-for-4 with a homer, a double, two RBIs and a walk. The Jays' Double-A affiliate next travels six hours west to Binghamton for a three-game series with the Rumble Ponies.

"That bus ride will definitely be a little better than it could have been," Murphy said after the 10-run win. "Coming off a few losses, it hasn't been fun. But even if we didn't win this series, we came out with a great win at the end. Everything came around today -- hitting, pitching, defense -- and hopefully this gets us going a little bit."