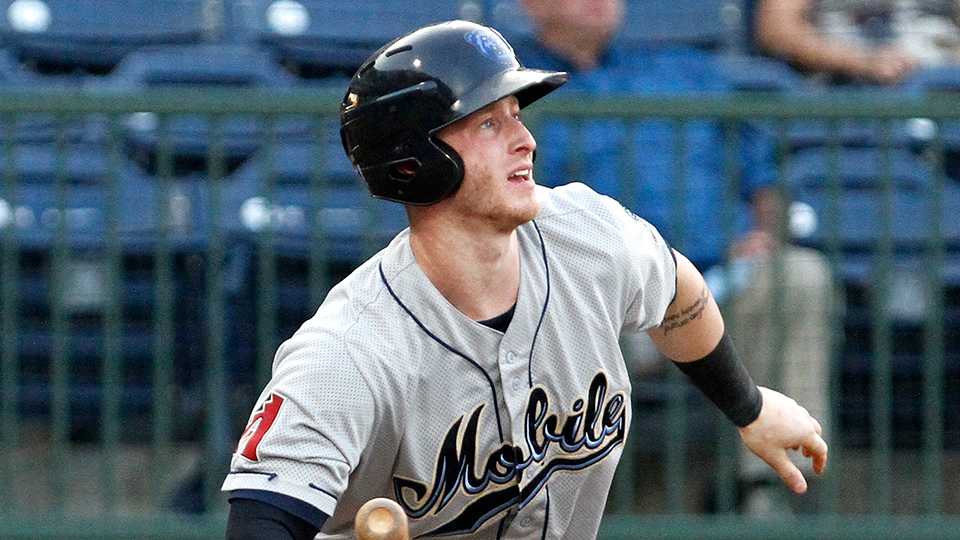 Zach Borenstein has done something twice that most players don't get to experience once. For him, however, the second time wasn't nearly as sweet.

Borenstein hit for the cycle for the second time in 13 months, going 4-for-4 in Double-A Mobile's 10-9 loss to Birmingham on Saturday night at Hank Aaron Stadium.

"Obviously, it went pretty well for me, but unfortunately, we didn't come out on top," the D-backs prospect said. "It was just one of those games. It's baseball, it happens. But I just happened to get some pitches to hit. Some nights you foul them off and sometimes you get in bad hitter's counts, but I was able to get some good wood on it.

"Baseball can be night and day in certain games or pitch to pitch. But you play to win. We played hard and it was a tough game. We made some mistakes we don't normally make and that allowed them to push some runs across. But it's a long season, 140 games, and we have to learn from it. Same thing for me. I have to forget about it quickly because we have another game tomorrow. This is over. It went well for me, but now I have to forget it."

Borenstein singled off first baseman Danny Hayes' glove in the first inning, tripled to center field leading off the third and blasted his first homer of the season to right-center field on a 2-1 fastball from Barons starter Tony Bucciferro with one out in the fourth.

"The home run was my third at-bat against [Bucciferro]. He started me off with a changeup that I was way out in front of. I just stepped out and regrouped and tried to relax a little bit and not try to make anything happen. I got in a good hitter's count and got something up in the zone."

Needing a double to complete the cycle, Borenstein walked against Kyle Hansen to open the sixth, but he got another chance leading off the eighth against Cody Winiarski. He capitalized by ripping a two-bagger to center field.

"I had known about [needing a double]. I was aware," the 24-year-old said. "But it doesn't change the approach. You can't aim the ball anywhere. [In the eighth], my teammates were excited for me and they were really supportive and I got a lot of congratulations."

That's two cycles in two years in two leagues with two organizations. The first in a win, Saturday night's in a loss.

On April 20, 2014, he became the first Double-A Arkansas player to hit for the cycle in nearly seven years when he accomplished the feat against Springfield. Just like Saturday, the hits came in exactly the same order.

"It can happen to anybody just by how the ball lands or where you hit it or where the outfielders are shifted," said Borenstein, who's batting .429 in 13 Southern League games. "It was just one of those nights. [Tonight] was extremely similar. In that game, the first hit was a single, the second was a triple, the third hit was the home run, then I ... doubled to center field. It was bizarre. Baseball is weird, it's a crazy game.

"Who knows? I might get to do it again or if I play the game a lot longer it may never happen."

The cycle is the sixth in the Minor Leagues this season, the third in a week and the second in as many days after Portland's Tim Roberson put his name in the record book on Friday evening.

It's also the second in the Southern League this year, but the first in a losing effort. Tim Anderson accomplished the first for Birmingham a week ago in an 8-7 win in Montgomery.

Borenstein went 7-for-16 in his first four games of the season with Mobile before a callup to Triple-A Reno, where he batted .154 with two extra-base hits and three RBIs in 18 games. He returned to the BayBears on May 7 and has hit safely in seven straight games. .

Selected in the 23rd round of the 2011 Draft, Borenstein was named the Angels' 2013 Minor League Player of the Year after leading the California League in batting, homers and slugging percentage. He started last season with the Angels but was traded to the D-backs with pitcher Joey Krehbiel in the deal that sent pitcher Joe Thatcher and outfielder Tony Campana to Los Angeles last July 5.

"I just need to stay focused," Borenstein said. "There will always be ups and down every single year for pitchers and hitters. Baseball is the hardest sport to play successfully at a high level. [Hitting coach] Jason Camilli and I have a good relationship and he was able to notice a couple minor things that could make a huge difference."

The Barons ensured Borenstein's heroics would come with a sour aftertaste. Anderson, the White Sox No. 2 prospect, went 5-for-6 with a pair of doubles, four runs scored and an RBI, while Christian Marrero reached base five times and scored twice and Danny Hayes collected three RBIs.

Ashley Marshall is a contributor to MiLB.com. Follow him on Twitter @AshMarshallMLB. This story was not subject to the approval of the National Association of Professional Baseball Leagues or its clubs.