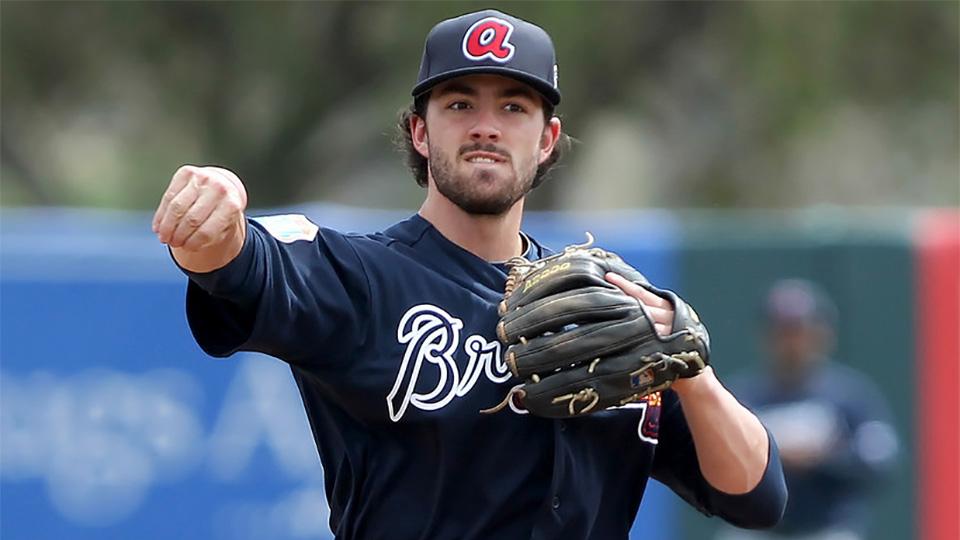 It's unusual for the first overall pick in any sport to make his full-season debut with an organization other than the one that drafted him. In baseball, it wasn't even technically possible until the "Trea Turner Rule" went into effect last offseason, allowing drafted players to be moved upon completion of that year's World Series rather than waiting until the following Draft.

The Braves were the beneficiaries of the rule change and picked up Swanson, the 2015 first overall pick out of Vanderbilt, along with fellow top-100 prospect Aaron Blair and Major League outfielder Ender Inciarte in December for Shelby Miller. Swanson instantly became Atlanta's top prospect, thanks to his impressive mix of offensive, defensive and speed tools.

With Andrelton Simmons being shipped to the Angels as part of the Braves' ongoing rebuild, the future of the shortstop position remains open in Atlanta, and Swanson should move into that role if all goes well in his first full season. However, the organization already had a potential shortstop of the future in 19-year-old Albies, who sits two spots behind Swanson at No. 3 in MLB.com's rankings and has done nothing but hit since signing out of Curacao in 2013.

The Braves invited both players to Spring Training and gave them equal chances at short and second base in the hopes a partnership would develop. That seems to have been the case with Swanson acknowledging the two were getting close in camp. However, the Braves are likely to give both as many chances as they can to improve at shortstop, and that means separate levels for the pair with Swanson likely ticketed for Double-A Mississippi and Albies headed to Class A Advanced Carolina. (Update: The Braves announced Minor League rosters on April 4 and flipped this scenario. Albies will skip Class A Advanced and start the season at Mississippi while Swanson will begin at Carolina.) Still, the Braves are hopeful the seeds have been planted for an impressive future double-play duo.

"You get to know one another," Braves director of player development Dave Trembley said. "We're trying to come up with the new (Alan) Trammell and (Lou) Whitaker from the Tigers. You're looking for those combinations, and the good ones stand out. I can't say one is going to play second, and one is going to play short. They might both play short. I don't know. But I know they're going to play together for a long time. They'll compete against each other in a friendly way, and it's a healthy situation."

Back and healthy: Max Fried, LHP

Fried came over from the Padres in December 2014 as part of the deal that sent Justin Upton the other way but hasn't made his first appearance yet in a Braves uniform, due to the Tommy John surgery he had four months before the deal. The Braves were willing to be patient and wait for the southpaw, who was ranked as MLB.com's No. 68 overall prospect at the time of his deal. Since then, Fried has fallen to No. 10 in the Braves ranks with all the other talent that has been added since his arrival, but Atlanta is excited to see what happens when the reins come off this summer.

"He's been very diligent, very professional in his rehab," Trembley said. "He did everything with us in instructional league except pitch in games. He went through our normal offseason program. We brought him in early as well, so he could do the throwing program under the supervision of our coaches and staff instead of home somewhere at a high school or with a buddy. I expect him to have a very big year."

Part of that belief comes not only from the 22-year-old's work ethic, but also his overall stuff. Fried had a plus fastball and curveball before the elbow surgery, and if he can show that both pitches are back up to snuff and his health is intact, he could be poised to move quickly toward joining the impressive pitching rotations at the higher levels.

"To me, I think he's a little bigger," Trembley said. "We're going to see if we can keep him on the same five-day program as everybody else. I think he's back 100 percent to what he was."

The Braves took Riley with the 41st overall pick out of a Mississippi high school last June after he told teams he preferred to be taken as an infielder rather than a hard-throwing pitcher. He struggled some initially as he got back into the swing of things, but took off at Rookie-level Danville, where he hit .351/.443/.586 with five homers in 30 games.

Atlanta has little doubt that the 6-foot-3, 220-pound third baseman, who turns 19 on Saturday, will continue to hit for a decent average and above-average power when he starts at Class A Rome this month.

The difference-maker regarding his ability to move could be his defense. Riley clearly has the arm for the hot corner, as evidenced by his pitching abilities in high school, but given his big frame, there were questions about his ability to stick there. Trembley said the Braves put Riley on a conditioning program this offseason and the organization's No. 7 prospect hit every marker when he showed up for his first Spring Training. Riley admitted agility has been a focus for him since going pro, and if he can show that he can stick to third, his stock could skyrocket this season.

Smith's speed was covered at length in Kelsie Heneghan's profile of him last month, but it's worth mentioning again.

The 22-year-old center fielder swiped 209 bases over his first three full Minor League seasons, including 57 in 2015 between Double-A Mississippi and Triple-A Gwinnett. So it shouldn't come as a surprise that he's earned an 80 grade from MLB.com for his speed on the 20-80 scale. Toss in the facts that he hit .281/.339/.367 at Triple-A last season and he was added to the 40-man roster last November, and it's not difficult to believe the Braves could have used Smith as their Opening Day center fielder, had Inciarte not come over from the D-backs in the Miller deal.

Instead, Smith is headed back to the top of the Gwinnett lineup, where he's expected to work on his on-base skills in order to become an even better leadoff candidate. A Major League debut in 2016, even if it's as a fourth outfielder/pinch-runner to start, is looking extremely likely, especially after he impressed the big club by going 9-for-26 (.346) with seven extra-base hits in his first Spring Training as a rostered player.

"Mallex has the chance to be what I call an igniter, a table-setter," Trembley said. "He can go home to third, first to home, home to second. He bunts for a hit. He's fearless. ... You can give it to Mallex. Mallex wants to be pushed. He wants to get better. He was a very exciting player for us last year. He dominated in Double-A. We sent him to Triple-A, and it was an experience where he could have caved but he adjusted to the league. But Mallex is going to be a good player. He's going to help the Major League team. I would expect at some point this year he'll do that."

After coming to the Braves from the Mets at last year's deadline in the trade that sent Major Leaguers Kelly Johnson and Juan Uribe to Queens, the 23-year-old right-hander's Double-A numbers improved greatly. At Binghamton, Gant posted a 4.70 ERA and 6.5 K/9 in 59 1/3 innings. After coming to Mississippi, he had a 1.99 ERA and 9.5 K/9 in 40 2/3 frames. Part of the reason for the drop in ERA was partly a turnaround in fortune. His 3.62 FIP in Binghamton was notably lower than his ERA while his .337 BABIP was abnormally high before dropping to .273 in Mississippi.

His actual potential lies somewhere in the middle of those results, but the Braves maintained the turnaround wasn't their doing. Instead, it was Gant seizing his chance with a new organization expected to rely heavily on young arms.

"When a guy comes from one organization to another in a Major League trade, the opportunity that exists here, I think, takes care of a lot," Trembley said. "He got another opportunity. He's got good stuff. He competes. We didn't change him or tweak him. We like what we have. Those kinds of guys, we don't have to do a whole lot with him. He just needs innings."

Ranked at just No. 22 in the Braves system, Gant has just average stuff between his sinking fastball, curveball and changeup, but the overall package gives him a shot to be a productive starter at the back of a Major League rotation. He's earned a long look after giving up one earned run on six hits and a walk in 8 1/3 innings this spring.

More to keep an eye on: The Braves took high school left-hander Kolby Allard with the 14th pick last June after he fell in pre-Draft rankings due to a stress reaction in his back. Because of the issue, Allard pitched only six innings in the Rookie-level Gulf Coast League last season, though he struck out 12 in the process. He will be held back in extended spring training to start 2016 with an eye on moving to a full-season affiliate, likely Class A Rome, come May. ... The Triple-A Gwinnett rotation should be stocked with talent with No. 4 prospect Blair, No. 8 prospect Tyrell Jenkins, No. 14 prospect Chris Ellis, former top-100 prospect Casey Kelly and Gant likely to start there. After posting a 3.16 ERA in 77 innings at Triple-A in the D-backs system last season, Blair might not need much more seasoning before making the jump to the Majors. ... The Double-A Mississippi rotation will have potential stars in Sean Newcomb and Lucas Sims, who both have impressive stuff but need to overcome control issues at the higher levels.