At 6-foot-11, No. 5 Giants prospect using height to his advantage 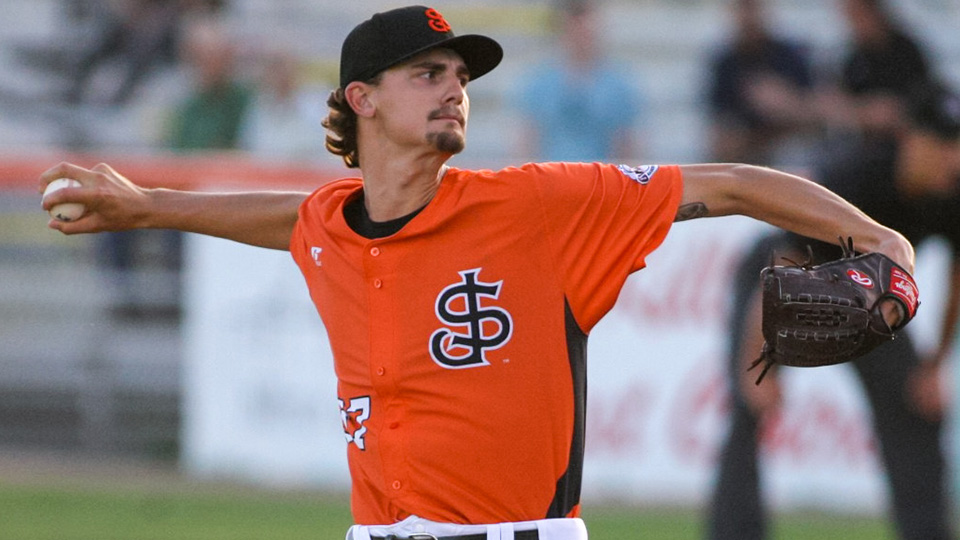 A second-round pick in 2018, Sean Hjelle is 3-5 with a 2.78 ERA since his promotion to Class A Advanced. (Shelly Valenzuela/San Jose Giants)

Baseball is a game of inches, and San Jose's Sean Hjelle uses all his 83 inches to his advantage.

The 6-foot-11 right-hander, drafted by the Giants in the second round in 2018, has a special angle to his pitches that keeps batters off-balance -- at least the first couple of times batters see him.

"I think when people see me for the first time, yeah [it's an advantage], because it's not an angle that you can re-create in terms of like a pitching machine," Hjelle said. "There aren't a bunch of guys my height out there throwing. After that, it's like anything -- the more you see it, the more you get used to it. So, I'm sure there are certain guys out there who have seen me for years now who are pretty accustomed to what I do.

"That's the fun part, that's the challenge, that's the chess match. This guy's seen me 80 times now, how am I going to get him out? That's fun for me."

Hjelle said he was always the tall kid growing up, but it was his eighth-grade year where he shot up eight inches, starting his school year in August at six-foot and ending in May at 6-foot-8.

"I honestly didn't notice," he said. "Basketball season, I was shorter than my coach that year and then toward the end of it, January or February, I was taller than him. I was like, 'Wasn't I shorter than you a couple of weeks ago?'"

Hjelle played basketball throughout high school, but his first love was always baseball. He said he often disappointed people while playing baseball for the University of Kentucky. They wanted to know whether he was a basketball player, and he proudly told them he was a baseball player, which didn't always go over well.

The No. 5 prospect in the Giants system, Hjelle is known for his precision on the mound. He throws strikes and doesn't walk a lot of batters. He seems to always have control over his lengthy body while pitching.

"I trip a lot," Hjelle joked. "I feel like I'm a pretty good athlete. I'm confident enough to field my position, and that's really all I need I guess."

Hjelle's height can be challenging in other ways like long bus rides, for instance. But he has found a way to get the space he needs.

"What I do is I take a pillow and a bunch of yoga mats and just lay them in the aisle and just stretch out that way," he said. "It's actually not that bad. It opens up more space for other people."

Hjelle got called up to Class A Advanced San Jose from the Class A Augusta GreenJackets on May 20 and has steadily improved while adjusting to the California League's many hitters' ballparks.

One thing he has worked on is adding a new pitch to his repertoire. He said he was mainly a fastball-curveball guy but started working on his changeup while in Augusta.

"I came up here, kept working on it and my last three or four outings it's been working really well for me," Hjelle said. "Everybody talks about starting -- you need at least three [pitches] and this and that. Actually seeing it … yeah, you need that third pitch the third time through the lineup to show them something. It's made a world of difference for me."

Hjelle had a strong outing in Lancaster on Saturday, allowing two runs on six hits with one hit batter, no walks and seven strikeouts in six innings. His ERA is 2.78 in 10 starts with San Jose.

Hjelle said his next plan for improvement is working on the mental side of throwing his pitches.

"Once you feel comfortable enough with all of your pitches and feel like you have command for them, the next step is the mental side," he said. "How do I sequence them off each other, certain hitters and seeing certain things? … That's just that chess match. Again, that's really fun for me."

Hjelle didn't always want to be a pitcher, but he said things worked out for the best.

"Honestly, I always wanted to be a catcher," he said. "I loved catching. I like to think I was pretty good at it, just because I had a decent arm. But once I hit my growth spurt, I wasn't going to catch anymore. I threw strikes, so they just kept putting me out there and that's just kind of where I landed."

He said he has been primarily a pitcher for about nine years, getting just 20 at-bats in his high school career.

"An NL team wasn't maybe the best draft for that one, because I might have to hit," he said. "I just need to drop a bunt down."

Hjelle has an easy-going demeanor and keeps things light with jokes or showing off some dance moves while working out with his team. Having fun is part of his philosophy.

While most people may see Hjelle as that really tall baseball player, that's not all he is or wants to be known for. He also enjoys golf and describes himself as a "big history nerd."

Moving on: San Jose experienced a bit of turmoil in its clubhouse this past weekend when manager Bill Hayes abruptly resigned after a 4-0 loss to Rancho Cucamonga on Friday. The team has bounced back well under interim manager Gary Davenport, the fundamentals coach, winning against the JetHawks on Saturday and Sunday. They scored their most runs of the season in a 17-5 win on Saturday, the day after Hayes left.

Got your number: The Visalia Rawhide are now 9-0 against the Inland Empire 66ers after a three-game sweep last week. All nine games have been home for the Rawhide. The two teams meet for six more games from July 17-19 and July 30-31 and Aug. 1, all at Inland Empire.

Getting the call: Two California League broadcasters will be making their debuts on the radio for their Major League affiliates. San Jose's Joe Ritzo is filling in during the San Francisco Giants' doubleheader at Colorado today, while Stockton's Zack Bayrouty will be getting the call for the Athletics against the Angels on Sept. 3.

Merisa Jensen is a contributor to MiLB.com. This story was not subject to the approval of the National Association of Professional Baseball Leagues or its clubs.