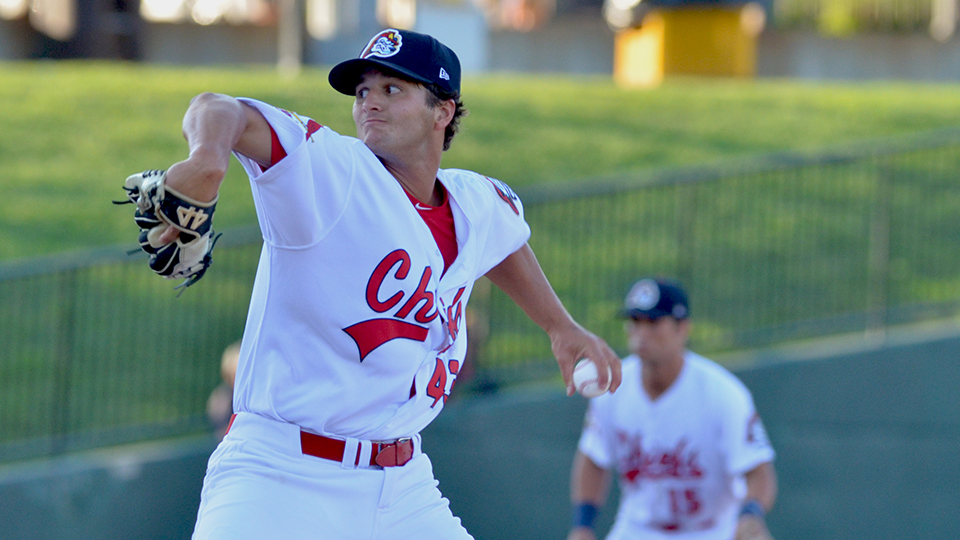 For an undersized non-drafted left-hander who played his college ball at Division II Bellarmine University, Austin Warner has had his share of impressive outings as a pro.

But none have been as good as Monday's.

The 23-year-old southpaw twirled a shutout for Class A Advanced Palm Beach, striking out 10 while allowing three hits and a walk in a 3-0 win over Lakeland.

"Just dominating the bottom half of the zone, staying low in the zone," were the keys, he said. "Earlier in the year, I was not doing that. [I' m] using the fastball a lot and working off that with the changeup, curveball and slider. The curveball, I've been using that as a strike more, but not as an out pitch -- that's more the changeup and slider."

Warner (3-1), whom the Cardinals signed out of the independent Frontier League last June, needed 103 pitches for his first complete game and threw 70 strikes. He attributed his top-notch command to pitching from the far first-base side of the rubber and working across his body. He began doing that in 2016 and it helped him develop more deception for his fastball.

St. Louis Minor League pitching coordinator Tim Leveque indicated the performance was what the organization has become accustomed to from Warner.

"He's a hard-working guy who throws strikes. He commands his pitches, he gives everything he's got every time he goes out there," Leveque said.

Warner has struck out 51 and walked five over 50 1/3 innings this season. The complete game was his longest as a pro -- he went eight innings in an April 26 win over St. Lucie.

Leveque explained the 5-foot-11 native of Kentucky does not overpower hitters, but uses his secondary pitches and attacks the strike zone to keep batters off balance.

"However tall you are, however short you are, stuff is stuff. ... His fastball is upper-80s, low-90s, but he commands it. He's got a good slider, good curveball and feel for the changeup. He definitely has more than just the fastball."

In the first inning, Warner shrugged off a one-out triple to No. 9 Tigers prospect Daz Cameron. He recorded a strikeout in the second, fanned the side in the third, added one in the fifth, sixth and seventh and notched two more in the eighth. Cameron walked in the ninth, but Warner induced Chad Sedio to bounce into a game-ending double play.

He admitted to being disappointed when he was ignored in the 2016 Draft despite going 15-12 with a 3.37 ERA and striking out nearly a batter an inning at Bellarmine.

"For sure, I was an undersized lefty, Division II guy, but with numbers that could have gotten me drafted if I was Division I," he said. "I had a couple of teams tell me they were going to draft me on Day 3, so I was definitely feeling bad. And it never crossed my mind that I would end up playing indy ball."

But he was fortunate to end up with the Frontier League's River City club, because the team's front office had a special connection to St. Louis.

"It's funny, [Cardinals director of Minor League operations] Tony Ferreira, his wife [Lisa] was the GM of the Rascals, and she kind of mentioned me to him," Warner said. "He would come watch [games] anyway and he turned our names in [to the Cardinals]. He called me and told me I was signing with the Cardinals. He signed me and [right-hander] Jason Zgardowski, who's also with Palm Beach."

Through his season-and-a-half outside of affiliated ball, Warner developed a new attitude about independent circuits.

"You're not there for the money at all," he said. "It made me respect indy ball more than before."

Monday's gem was supported by No. 15 Cardinals prospect Dylan Carlson, who went 2-for-4 with a pair of RBIs. Danny Hudzina hit a solo home run.