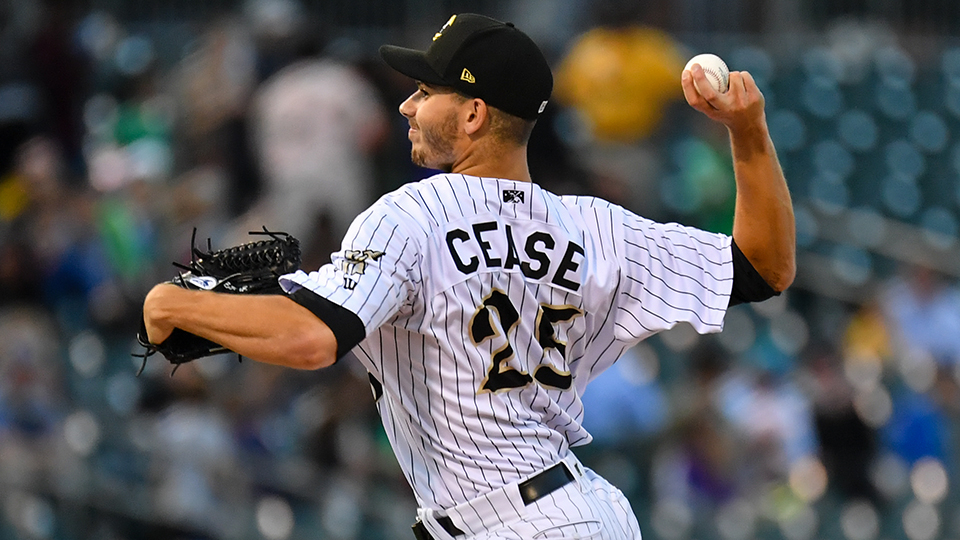 Dylan Cease has recorded 165 strikeouts over 129 innings since the start of last season. (Laura Wolff/Charlotte Knights)

Even when the first two batters in his Triple-A debut greeted him with singles, Dylan Cease's confidence never wavered. He had all but established himself with a breakout campaign last year and that momentum carried him into 2019.

Sure enough, the third-ranked White Sox prospect worked around the early trouble, allowing just three hits and striking out five over five innings as Charlotte blanked Norfolk, 4-0, in the opener of Tuesday's doubleheader at BB&T Ballpark.

Over his last five starts between the International and Southern Leagues, Cease sports a 0.40 ERA across 22 2/3 innings. In that span, he's yielded only nine hits and fanned 34.

One of the 23-year-old's biggest takeaways from his first outing with the Knights was keeping the Tides out of the walk column, something he had issues with at the end of last season. During his final three starts for Double-A Birmingham, Cease issued nine free passes, so keeping his control in check was a positive step forward.

"It's been a while since I've faced batters live, so I was excited and ready to get back out there," he said after the twinbill sweep. "I was able to command my fastball and throw my off-speed pitches for strikes. So I'm just happy we were able to win both ballgames we played today.

"If you can establish your fastball, everything plays off of that. That's one of the things I'm trying to take pride in and I'm happy when I don't walk guys. The fact that I was able to command [the fastball] is something that I'm happy with."

Cease (1-0) began last season with Class A Advanced Winston-Salem and blazed through the Carolina League with a 9-2 record, 2.89 ERA and 1.12 WHIP. That earned him a promotion to Double-A, and the right-hander got even better with a 1.72 ERA, 0.99 WHIP and 78 strikeouts over his final 10 starts of the year. The stretch of Southern League dominance by MLB.com's No. 21 overall prospect included a 24-inning scoreless streak that stretched into his eighth outing on the circuit.

Cease picked up where he left off in his International League debut, throwing 47 of 73 pitches for strikes and facing one batter over the minimum.

"It's always promising, at the end of the day, pitching's all about how you execute pitches and not giving away bases is a big part of it," the starter said. "I felt comfortable the whole game, once I started mixing in the off-speed. I felt like that was when I was able to start cruising."

He got off to an inauspicious start when Stevie Wilkerson and No. 16 Orioles prospect DJ Stewart opened the game with back-to-back singles. The 23-year-old evaded danger when he got Anthony Santander to bounce into a double play and retired Chance Sisco on a liner to left field.

"Truthfully, it's just a matter of getting back on the mound and trying to execute the next pitch and not panicking," Cease said. "One of the singles wasn't hard hit and the other was hit pretty well. Really, it's just executing pitches, don't panic and good things happen if you just let it happen.

"[The double play] is ideal in that situation, if I can get two outs with one pitch. Two outs and a runner at third is a lot different than one out and runners on first and third. That was definitely a big play of the game."

Christopher Bostick singled to left field with two outs in the second inning, but was caught stealing second to close out the frame. Cease was perfect the rest of the way, setting down the final nine hitters he faced.

An All-Star Futures Game selection last year, Cease has recorded nine outings of at least five scoreless innings since the start of last season. MLB.com reported last week that the White Sox and Cease had early discussions about a contract extension, although it is not expected to be finalized soon.

For the second straight year, Cease got an invite to big league Spring Training, allowing one run in 2 2/3 innings in the Cactus League. Working with the Major League club and talking with the likes of Lucas Giolito, the Georgia native said the time was useful time for teaching him tricks of the trade.

"Any time you can get experience on the big league side of things, I always cherish that and try to take as much away from it as I can," Cease said. "For me this year, I got hit around a little bit in Spring Training, so it kind of makes you refocus and make sure you're on top of your game. So it was solid.

"Someone I talked to a good amount was Giolito. It's even necessarily the baseball side of it, a lot of times it's the, 'How are you handling adversity?' Little things like that are important when it comes to being a good pitcher. I try to learn as much as I can from the guys that have been there."

Josh Osich worked around a hit and a walk over the final two frames to finish off Charlotte's first shutout of the season.

It wasn't long before the Knights garnered their second shutout, one-hitting the Tides in the nightcap en route to a 3-0 win. Starter Dylan Covey surrendered the lone hit and struck out four over the first three frames. Zach Thompson whiffed four over the next two and Thyago Vieira tossed two perfect frames to earn the win.

No. 12 White Sox prospect Zack Collins delivered the decisive blow with a two-run homer in the sixth. Preston Tucker added insurance with an RBI double.