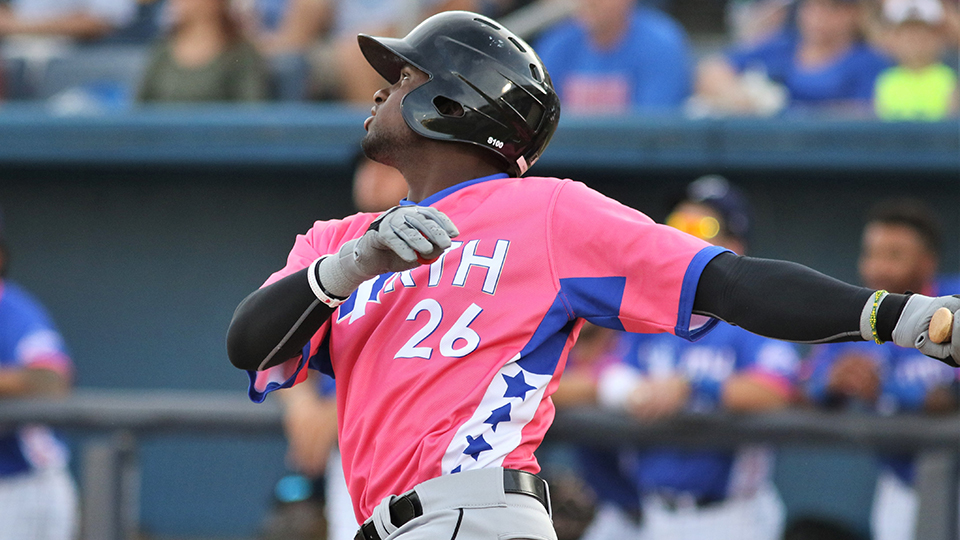 On Tuesday night, he put on a show at the 43rd annual Southern League All-Star Game.

Robert doubled, tripled and nearly homered, driving in two runs as the North Division beat the South 7-3, before 4,209 at MGM Park, home of the first-half division champion Biloxi Shuckers. He was the easy choice for All-Star MVP honors on a North squad that totaled 14 hits.

"He looks the part. He is the part," said Jackson Generals first-year skipper Blake Lalli, a Major League veteran who managed the North squad. "I mean, his willingness to drive the ball the other way makes him a really tough out.

"And then, if you mess up, he can do some crazy things to a baseball. I have seen him hit some really, long, long home runs. And he'll take his hits the other way, too … so he's really advanced that way."

Batting third for the North, Robert doubled down the third base line in the first inning to drive in the game's first run. An inning later, Robert factored again when the North batted around against 19th-ranked Braves prospect Tucker Davidson, who leads the league with a 1.61 ERA. His delivered a two-out RBI triple in a five-run barrage that broke open the game.

Video: Luis Robert doubles in a run in All-Star Game

After Tennessee's Vimael Machin led off the inning with a single, Jackson's Jeffrey Baez  -- winner of Monday's Home Run Derby -- popped out, but the next six batters factored in the scoring.

"I'm just very happy and excited to be here in my first official All-Star Game here in the U.S. and [Minor League baseball]," Robert said through an interpreter. "I'm very happy and content that I got the chance to be the MVP."

The North had five hits in the second, with Tennessee's P.J. Higgins, Reds No. 28 prospect Alfredo Rodriguez, fourth-ranked D-backs prospect Daulton Varsho, Rays No. 3 prospect Jesus Sanchez and Robert all driving in runs. Davidson was lifted after Sanchez singled home the fifth run of the inning.

"I was really impressed with the way guys actually grinded out at-bats in this game. They made [Davidson] work -- and that's a big-time arm," said Lalli, a three-time Southern League All-Star with the Smokies. "Just a really fun night for me to just sit back and watch the best players in the league.

"The lineup never stopped: it was one guy after another. They swung the bats, they put on a good show for the fans, and it was great."

Robert, who got a $26 million bonus when he signed with the White Six in 2017, began this season with Class A Advanced Winston-Salem, where he batted .453 with eight homers and 19 RBIs in 19 games. With Birmingham, he's batting .307 with four homers and 20 RBIs in 41 games.

"I've always enjoyed being a hard worker," the 21 year-old Cuban said. "I haven't changed too much, but the results from last year weren't there, because of [nagging] injuries and everything. "I've been doing everything I've always done, but this year the results are there because I've had a healthy season."

"I think it's a guy we'll all watch for a long time," Lalli said. "I don't see any reason why not. I know it was fun to watch him tonight and we're rooting for him."

The South's only baserunner over the first three innings was Pensacola's Jaylin Davis, who walked. He ended up driving in the game's final run with a ninth-inning single. The first South hit was Patrick Leonard's single in the fourth that plated Brewers No. 30 prospect Trent Grisham, who walked and stole second.

Eleven North pitchers gave up six hits, including a leadoff homer in the seventh by Mississippi's Drew Waters, who leads the league with a .338 average.

After a line of popup storms moved through the Biloxi area Tuesday, the weather cleared and the sun was out at game time on a perfect evening.

"That's what you want," Lalli said. "You want these guys to get a chance to showcase themselves on this night. And they got to do it. So it was perfect."

The Shuckers led all teams with nine All-Stars. Three pitchers were added when Pensacola's three pitchers -- Brusdar Graterol, Griffin Jax and Ryan Mason -- were placed on the injured list. Jax pitched into the fourth inning Sunday and should be ready for the second half.

Baez won the Derby on Monday night, blasting 14 balls out of MGM Park in the final round to beat Generals teammate Jamie Westbrook.

Bill Vilona is a contributor to MiLB.com. This story was not subject to the approval of the National Association of Professional Baseball Leagues or its clubs.