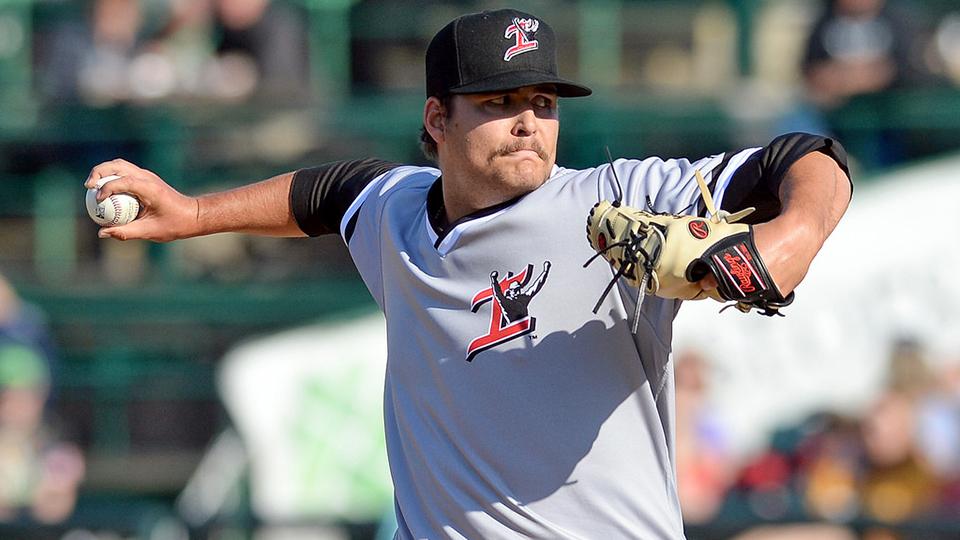 Blake Battenfield ranks fourth in the South Atlantic League with a 1.34 ERA through 33 2/3 innings. (Ashley Marshall/MiLB.com)

Blake Battenfield knows a thing or two about needing to save a bullpen. The 23-year-old was used mostly as a reliever during his time at Oklahoma State before the White Sox took him in the 17th round last year. The transition to a full-time starting role has featured few hiccups, and after the longest outing of his career, he's got something new to add to his resume.

The Class A Kannapolis hurler has been named the South Atlantic League Pitcher of the Week for May 7-13 after striking out 10 over eight scoreless innings last Thursday at Greenville. This is the first award in Battenfield's still-brief Minor League career.

"In college, I was mostly a reliever, but I started a little my last year. I was basically did a little bit of everything," he said. "That helped teach me how to tackle all different types of scenarios and handle whatever adversity comes my way. I'm still learning this role, still learning my body and what it responds to when it comes to being a starter. But I'm happy with how things are going.

Battenfield was incredibly efficient in the gem, needing only 82 pitches to get through eight frames thanks to 10 of his 18 recorded outs coming on two pitches or fewer. Yet his 10 strikeouts also marked a career best, beating out the eight he collected on April 23 at Delmarva. The 6-foot-3 right-hander threw 63 of those 82 pitches for strikes, causing the Drive to be aggressive.

Battenfield has not allowed more than two earned runs in any of his seven starts with the Intimidators. His 1.34 ERA ranks fourth in the Sally League, while his 0.71 WHIP is best among 102 qualified pitchers across both Class A circuits. He's struck out 34 batters and walked only four in 33 2/3 innings. Those are all marked improvements from the 4.91 ERA and 1.49 WHIP he posted in 69 2/3 innings as a redshirt junior with Oklahoma State last spring and the 4.88 ERA and 1.37 WHIP he had in 31 frames (all in relief) at Rookie-level Great Falls.

"I don't know if I'd say I'm surprised," Battenfield said. "I'm like anyone else here. We all take pride in what we do. We're all going to do our best, and these are the types of results we want. Starting, relieving, it's the same concept. I'm here to get three outs an inning, and that's where my focus is."

Perhaps the biggest thing that's allowed Battenfield to make the transition so smoothly has been rounding out his arsenal. Primarily a fastball-slider pitcher during his time in Stillwater, he has added a curveball and has become much more confident in his changeup. It's the latter offering that's receiving the biggest praise.

"From what I see, the changeup is the equalizer for him," said Kannapolis manager Justin Jirschele. "He can command the pitch early or late in a count. It doesn't really matter. He can get it down in the zone at any point in the count because he has the confidence in it. It really keeps guys from sitting only on one or two pitches."

"First off, the command of it has gotten so much better," Battenfield said. "And then there's the consistency and the action, too. I didn't need it in high school, and in college, there would be days it was there and days it wasn't at all. At Great Falls, I found out really quickly that just a fastball and slider wasn't going to work, so I worked on it a lot with [Voyagers pitching coach] John Ely, who I found out basically lived off the changeup. I worked on it in bullpens and really made it my focus going into instructs and the offseason and Spring Training. It's not where it needs to be still, but it's definitely going to continue to develop."

Battenfield entered his first full season not as the biggest name in a loaded system that includes Michael Kopech, Alec Hansen, Dane Dunning and Dylan Cease. But even in a new role with a new club, the Oklahoma native is doing all he can to stick out. For his skipper, that starts with being the same, consistent Battenfield.

"I don't think a whole lot has changed," Jirschele said. "He's a guy that's not going to be high, not going to be too low. I know in the eighth he made a nice play on a swinging bunt, and he did get a little pumped after that and showed a little emotion. I'll be honest, I was right there hollering for him. But really, he's an even-keeled guy with a bulldog mentality, and it's working for him."

Below is the complete list of Minor League Offensive Pitchers of the Week for May 7-13: