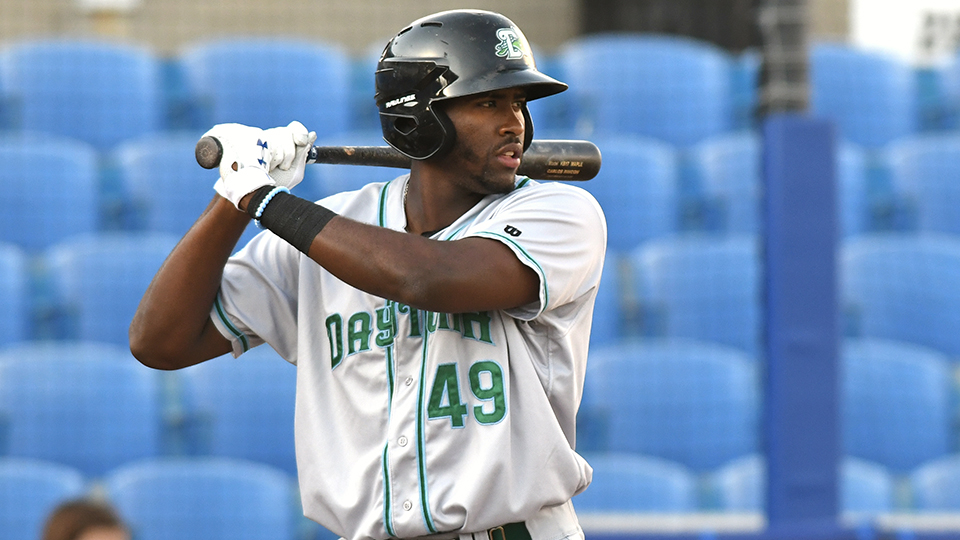 Ibandel Isabel has been searching for consistency during a roller-coaster spring. Two days into June, he's riding high.

The Reds prospect knocked a pair of homers, giving him four in the last 48 hours, and drove in six runs to power Class A Advanced Daytona to a 9-6 victory over Lakeland on Saturday at Publix Field at Joker Marchant Stadium.

Isabel arrived in Daytona in mid-April in a trade with the Dodgers after six games in the California League. He got off to a slow start with Class A Advanced Rancho Cucamonga, but the change in scenery served him well as he amassed a pair of four-hit performances in his first three games in the Reds system.

"I knew he had that raw power from the first swing after he arrived with us," Daytona hitting coach Alex Pelaez said. "The first time through the league, he was surprising some people. And then word got out, and they were pitching him differently."

The honeymoon phase was shortlived. In May, Isabel put up a .172/.250/.362 slash line as he struggled not to swing for the fences on every pitch, Pelaez said. But he's been making progress.

"I laid low and let him come to me and got to know the guy," the hitting coach said. "Soon we started working on getting him to slow down his rhythm and learning to take a base hit. Tonight, they just happened to be homers."

Isabel's long balls came at opportune times on Saturday. After drawing a walk in the second inning and striking out in the fourth, the first baseman took the plate with the Tortugas trailing, 4-2. Teammates TJ Friedl and Tyler Stephenson walked and Isabel worked the count full before sending a pitch over the left-center wall.

"Most importanly, I think it's the pitches he's not swinging at and how he's taking them," Pelaez said. "When I watch him take a pitch, that's how I know he's seeing the ball well, when his takes are better. He's got a better pitch selection and, recently, he's been hitting them out."

The Flying Tigers had grabbed a 6-5 lead by the time Isabel came up again in the eighth. With Stephenson and Reds No. 7 prospect Jose Siri aboard, Isabel wasted little time, launching the second pitch from Eduardo Jimenez to right-center for another three-run homer.

The six-RBI night followed Isabel's impressive performance in the opener of Friday's doubleheader as he launched two jacks and drove in three runs. With the pair of two-homer games, Isabel has matched his multi-hit game total for May.

"I talked to him before today's game and told him that [after Friday], he's not going to see more fastballs from them. It was going to be a lot of off-speed stuff and he needed to lay off and look for things up in the zone," Pelaez said. "They threw up and he found them and took the barrel to it."

Now, Pelaez added, the next step is to put these types of games into a regular rotation and not let them be the exception. With the raw power Isabel has shown, knowing when to unleash it is the next step in his development.

"Now he needs to commit to what he's doing at the plate and not flip-flop from what he wants to do in each at-bat," Pelaez said. "The rest will take care of itself. He has a lot to offer, but we have to get him more consistent and steady with his approach and his routine, both on and off the field. But he's a great kid, for sure, and I'm certain he'll get it."

Stephenson, the Reds' eighth-ranked prospect, knocked a two-run homer in the second inning. Lakeland's Zac Shepherd answered with a grand slam in the fourth.

Nathan Brown is a contributor to MiLB.com. Follow him on Twitter @NathanBrownNYC. This story was not subject to the approval of the National Association of Professional Baseball Leagues or its clubs.