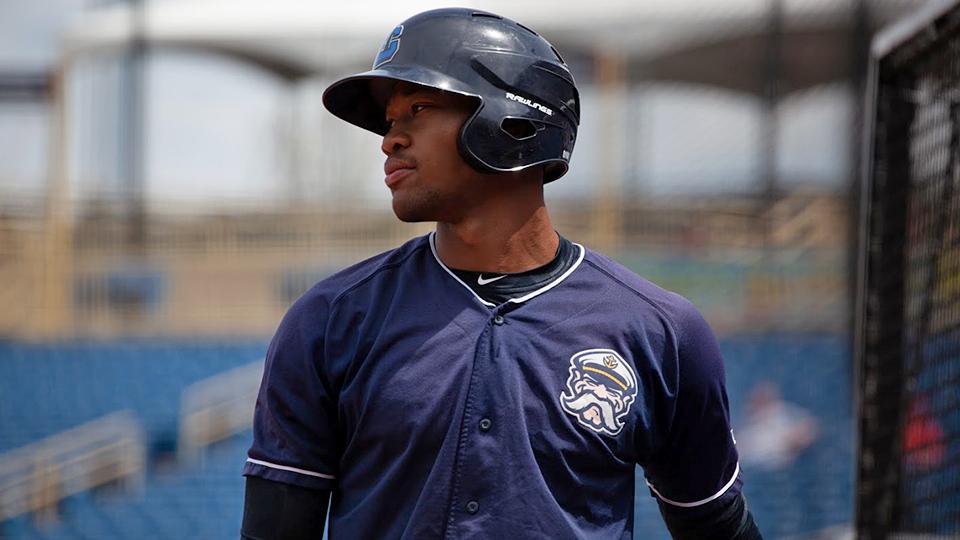 Will Benson was one of three Midwest League players with at least 20 homers and 10 steals this season. (Alicia Falorio)

Will Benson was heading into the final weeks of a rough season with Class A Lake County when he had a talk with his family. The 2016 first-rounder had shown plus power and good speed, but he'd hit below the Mendoza line for much of the campaign and struck out in roughly 30 percent of his plate appearances. Calling his parents for any final pieces of advice, the 20-year-old outfielder heard what he needed.

"Obviously, it's been a very testing year," he said. "But what they told me was, 'Why not put some icing on the cake and finish strong?' That's all I could do at that point. So I took that mentality that, from there on out, I was going to win every at-bat, win every pitch because that's what I'd need to do to finish things out on a good note."

The No. 22 Indians prospect has been named Midwest League Offensive Player of the Week after going 10-for-28 (.357) with four homers, a double and 10 RBIs over seven games from Aug. 27-Sept. 3. This is the first Minor League Player of the Week award for Benson since Cleveland took him with the 14th overall pick out of a Georgia high school in 2016.

All four of the left-handed hitter's home runs last week came over three contests from Thursday to Saturday. His two-homer game against visiting Lansing on Saturday was his third such performance of the season but first since June 6. He also tied a season high for hits last Thursday, going 3-for-5 with a homer, four RBIs, a walk and a stolen base at Fort Wayne.

That's a much more palatable resume for a player whom evaluators believe has the raw tools to be an exciting prospect on the grass but has been held back by a rough contact rate. (He recorded a 30 percent K rate this season). But before this week even began, Benson felt a turnaround coming on Aug. 23, when he worked a full count before crushing a pitch from South Bend right-hander Javier Assad to dead center field for a two-run shot.

"The biggest adjustment was being early in the box with all of my movements and being slow but rhythmic with them, too," Benson said. "Then I turned it into a mentality of 'OK, this really is a war between me and the pitcher.' I can't let them beat me. I won't let them beat me. It's caused me to have more of an aggressive approach and really get after it, and that paid off this week."

With the Captains out of the Midwest League playoff race, Benson's season ended Monday, and he's soon headed home to Georgia before traveling to the Indians' complex in Arizona to participate in the instructional league, starting Sept. 15. Beyond just the boost of confidence that comes with a mini-breakout, Benson, who had the chance to play baseball and basketball at Duke instead of singing with the Indians, feels like he's unlocked something in his hitting ability -- one that could lead to his true potential coming out on the diamond.

"It's going to be more baseball-oriented when I pick things up," he said. "I want this feeling to be second nature. I don't want it to be my whole focus. I just want it to come naturally, and I want it to last 140 games. I'll still get my Spring Training in and all that, but I'm going to be spending a little bit hammering all that out."

Part of that process will involve watching tape, getting back in the cage and working on the movements that allowed him to tap into his power consistently during the season's final week. But first will come a break. Having more than doubled his amount of games played with Class A Short-Season Mahoning Valley in 2017, Benson will take three or four days back home to recuperate before diving back in, hoping to recapture some of that end-of-season magic.

"I just hope I get filled with hugs and kisses -- that's all I really want," Benson said of his return home. "I want the baseball stuff to stay away for a bit, but I think they're going to be proud with the way I finished. At some point, they'll want to dive deep into the mental process and talk about what we have to do to keep this going into the offseason and next year. But I just want to thank them from the bottom of my heart. They've kept me grounded through all sorts of situations, and I appreciate it."

Below is the complete list of Minor League Offensive Players of the Week for Aug. 27-Sept. 3: