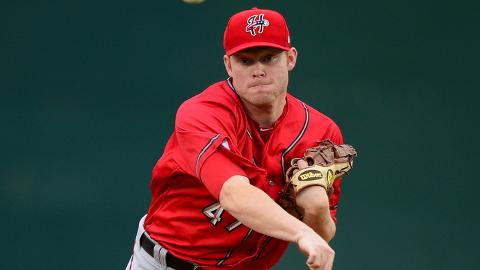 Harrisburg's Paul Demny threw 69 of his 113 pitches for strikes on Thursday. (Kevin Pataky/MiLB.com)

Paul Demny set out to change his thinking on the mound, and in the process, became part of history on Thursday.

The Texas native struck out five and walked three for the Senators. The only blemish on his line score came in the seventh inning, when he issued a free pass to Allan Dykstra and committed a throwing error on a Cesar Puello ground ball that allowed Dykstra to reach third base. Francisco Pena hit into a run-scoring double play and Demny induced Daniel Muno to ground out to end the threat.

"I'm thrilled," the Nationals right-handed prospect said. "I'm ecstatic because today I didn't try to do too much and it ended up being one of the best experiences of my life. Our defense was phenomenal tonight. Without them, that game would have been a lot different."

After tossing a 1-2-3 eighth, Demny hoped to go back out for the ninth, but knew it wasn't likely.

"[Manager Matt] Lecroy came up to me and he was smiling and I knew what he was going to say," Demny said. "I had the obvious objection, but I knew my pitch count had to be high and sure enough it was. Krol has been throwing well all year. I knew he could do it. [Lecroy] made a good decision and it paid off obviously."

Demny, who said he'd never been part of a no-hitter before, had been hit hard over his last two starts, allowing 11 runs -- eight earned -- on 14 hits over 7 1/3 innings. The difference on Thursday came down to accepting his limitations.

"In previous starts, I was thinking of the things I can't control," the 23-year-old said. "Today I was thinking about where the ball goes into the mitt. You can try to throw hard and maybe you get another mph, but it's the same speed. Today my velocity was right where it's usually at, but physically I was able to control it better because I wasn't trying to reach back and fire it. I was just concentrating on spots.

"I'm happy as [heck], I'm ready to give my season another kick-start. I've had great outings, good outings and a lot of bad outings, and I just want to take this into the future and show some consistency."

Krol retired the side in order, fanning Richard Lucas and Dykstra to close out the game. It didn't take long for the two hurlers to congratulate each other.

"I think I levitated over the guard rail and ran out and slapped Krol somewhere maybe in the face or the butt," Demny said. "I think I slapped him eight times."

"I didn't even congratulate my catcher first, I just went right over to the dugout because I knew [Demny] was coming out there," Krol added.

For Krol, who tossed two no-hitters in high school, it was an odd feeling to be coming into the game in the ninth. The left-hander, who turned 22 on Thursday, has been a starting pitcher for most of his pro career.

"This is my first full year in the bullpen and it's been fun but it's definitely a little weird coming out of the bullpen instead of taking the mound in the first inning," he said.

One would think a pitcher in a new role coming into a tense spot might feel some butterflies, but Krol kept the faith.

"Nerves didn't really arise too much, I knew I needed to have a confident attitude going out there," the 2010 Midwest League All-Star said. "It was in the back of my mind, I just pitched and filled up the zone. I was trying to go there with a clear head and try and pitch with the same routine I always have."

It's the second no-hitter in the Eastern League this year. Jack Snodgrass and Daryl Maday combining on a seven-inning no-hitter for Richmond on April 5. It's the first for the Senators since Shairon Martis tossed seven hitless innings against New Hampshire on Aug. 26, 2011, and the first time since April 28, 2003 that Harrisburg has completed a nine-inning no-hitter.

Nationals' top prospect Anthony Rendon was 2-for-4 with a double and an RBI while Rick Hague plated a pair of runs for the Senators.

Robert Emrich is a contributor to MLB.com. Follow him on Twitter @RobertEmrich. This story was not subject to the approval of the National Association of Professional Baseball Leagues or its clubs.