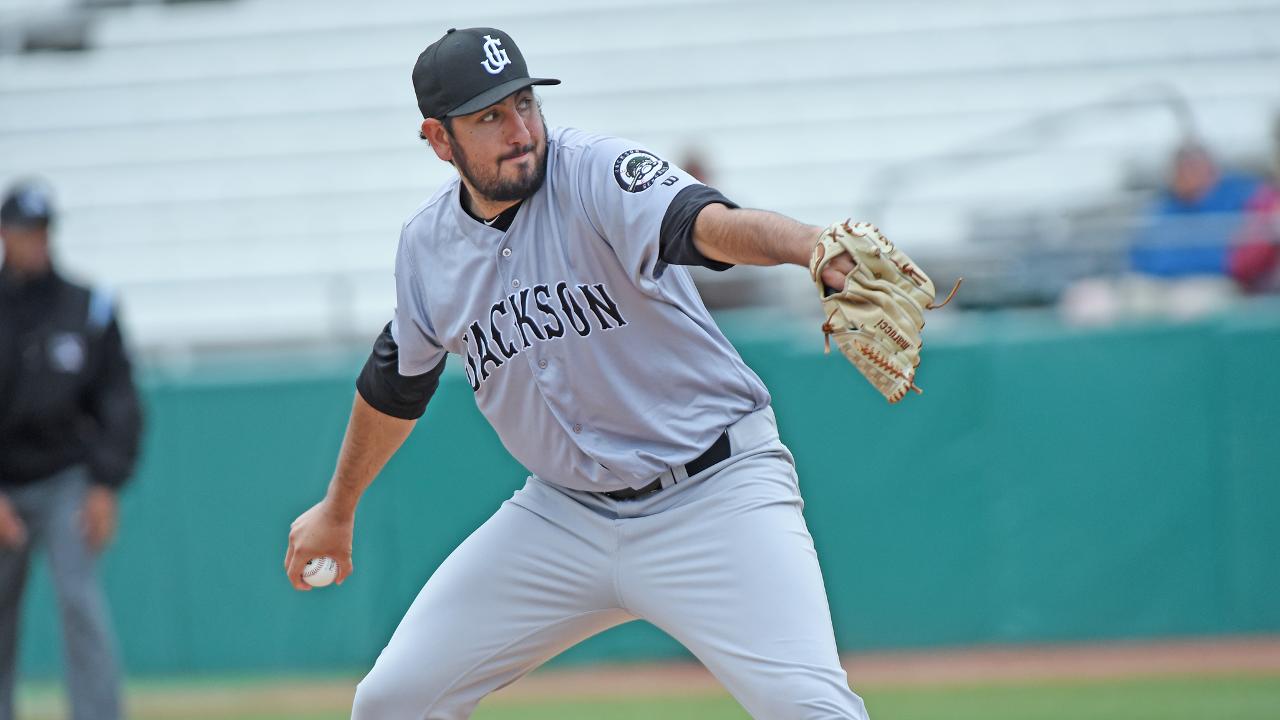 It took five Double-A Generals pitchers and another long wait for a rain delay to make history Thursday.

Arizona prospects Justin Donatella, Daniel Gibson, Kirby Bellow, Kevin Ginkel and Brad Goldberg combined to strike out 11 as Jackson no-hit Jacksonville in a 6-0 victory at the Baseball Grounds of Jacksonville.

Donatella's night on the hill ended with an hour-and-25-minute delay, but for the rest of the Jackson pitching staff, it was just the beginning. It didn't take long for the team to take note of what was happening.

"I kind of knew coming out and looking at the scoreboard, it was easy to see," said Donatella. "You can see and take an analysis of the outing. You really start noticing in the seventh, eighth, ninth ... it's like, 'Oh, they still haven't gotten a hit.' It was kind of cool to do that."

It's the kind of result that's never expected when a pitcher leaves the game early.

"What you're doing is trying to figure out the pitching for the rest of the game," said Generals pitching coach Doug Drabek. "All your thinking is getting through the game and having a pitcher for tomorrow. I'm not sure [the no-hitter] was even on the map."

On Wednesday night, the team had played the waiting game as well before fourth-ranked D-backs prospect Taylor Widener racked up a career-high 12 strikeouts. This time, the starter came out of the game and the bullpen combined to help record first no-hitter for the franchise since July 22, 1999, when Dave Manning shut down Jacksonville for the club then known as the West Tenn Diamond Jaxx.

"We have a pretty good pitching staff," said Donatella. "Just to be able to see the kind of work that we've been putting in come to fruition is a pretty special moment for our pitching coach and our pitching staff. It was nice the way it worked out."

The 2015 15th-rounder, whose ERA improved to 3.30, enjoyed sharing the accomplishment with the rest of the staff.

"It's frustrating obviously when you get a rain delay and everything," Donatella said, who walked two. "When you're throwing the ball well, you want to keep going. But we know we have a pretty good staff, so giving them the ball, it's pretty easy to know you're in good hands with the guys that are coming in."

Gibson earned the win after striking out three over two innings. In five games with the Generals, the southpaw has yet to allow a run. Lefty Bellow walked one over one frame to notch his sixth hold of the season.

Right-hander Ginkel struck out two over two perfect frames and righty Goldberg struck out two to close it out with a 1-2-3 ninth. He sat down seventh-ranked Marlins prospect Isan Diaz swinging to end the game.

"We were laughing because no one had really said anything," said Donatella of the team's reaction at the conclusion of the night. "Our celebration didn't even appear to give it away that we knew what we just did. I think everybody just kind of kept their head on their shoulders and worried about executing the pitches and the playoff race that we're in. I think we did a good job of doing that."

It marked the 13th no-hitter in the Minor Leagues this season and the third in the Southern League. It was the seventh in franchise history, including the club's years in West Tenn and Memphis.

"The rewarding part for me is seeing the excitement for them," said Drabek. "They have to make the pitches and get the outs. They did a great job. It's a little more difficult because a guy can have a rough inning or give up a hit, but they did a good job executing the pitches."