Veteran skipper Kotchman honored as Manager of the Year 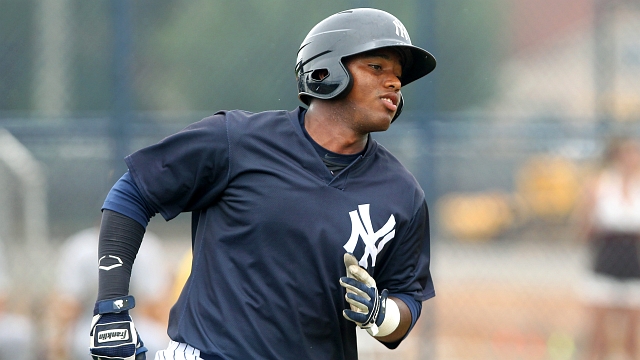 ST. PETERSBURG, Fla. -- The Gulf Coast League announced today its All-Star Team, Manager of the Year and Most Valuable Player. Red Sox manager Tom Kotchman led his team to the 2014 league title with a regular season record of 36 wins and 24 losses. As the youngest team in the league, the Red Sox posted a .250 batting average and scored a GCL best 306 runs while giving up the second lowest number of runs in the league. Magneuris Sierra, outfielder for the Cardinals, was named the league's Most Valuable Player following an impressive season marked by league-leading stats in average (.386), hits (78), on-base percentage (.434), runs scored (42) and total bases (102). Sierra was also named to the GCL All-Star Team this season and selected as the GCL Player of the Month for July.

Cardinals teammates Malik Collymore and Michael Pritchard were named All-Stars this season. Second baseman Collymore tied for the league lead in triples (8) and was third in hitting (.333). Outfielder Pritchard was fourth in average (.330), third in hits (60) and had an impressive .994 fielding percentage.

Three members of the Yankees organization also earned All-Star honors. Shortstop Angel Aguilar and outfielder Alexander Palma of the Yankees 2 squad earned their positions by way of .311 and .305 batting averages, along with 31 and 45 RBIs, respectively. Aguilar was second best in the league in two offensive categories: home runs (7) and slugging percentage (.536). Palma led the league with 45 RBIs and had a second best 65 hits. Utility player Bryan Cuevas of the Yankees 1 squad posted a .356 batting average, the second highest in the league, with 23 RBIs. Cuevas also topped the GCL with his .564 slugging percentage.

Red Sox third baseman Rafael Devers posted 36 RBIs, tied for third in the league. He also ranked among the top 10 in batting average (.312).

Pirates first baseman Carlos Munoz finished second in the league with 38 RBIs and tied for second with 15 doubles. Munoz also tied for the league lead with 30 walks.

Arvicent Perez, catcher for the Tigers, posted a .309 batting average with 25 hits and 20 RBIs. On the defensive side, Perez threw out 41 percent of potential base stealers. After 27 games with the GCL Tigers, Perez was promoted to Class A West Michigan.

RHP Henry Centeno topped the league with his outstanding skills on the mound as a member of the Rays. Centeno posted a 4-2 record with a league-leading 1.50 ERA in 54 innings pitched. He led the league with an opponent's batting average of .203 and WHIP of 0.91.

Phillies LHP Denton Keys tied for fourth in the league with a 1.12 WHIP. Keys struck out 35 batters while walking only 12 in 49 innings pitched.

Relief pitcher Trevor Hildenberger of the Twins led the league in games pitched (23) and tied for the lead in saves (10). The right-hander went 28 innings striking out 30 and walking five.

The 2014 season marks the 35th year that Kotchman has been a skipper, and is the ninth time that he has won a league title. Kotchman was named GCL Manager of the Year in his first year at the helm of the Red Sox.

The 2014 Gulf Coast League All-Star Team is as follows: