Osprey fans ready to float on down

Missoula fans take river to the park; Grizzlies in holiday spirit
By Benjamin Hill
Minor League teams are known for the creativity of their gameday promotions. Every Tuesday we'll preview the week ahead, highlighting the best and brightest (not to mention strangest) that the industry has to offer. If you'd like a particular promotion to be considered for this feature, please send it to [email protected] with the subject line "Promo Preview."

Every Tuesday throughout the season, the Missoula Osprey offer two-for-one tickets to any and all fans who bike to the ballpark. During their next homestand, they are taking this embrace of alternative transportation to a whole new level.

Sunday is the team's first-ever "Float to the Ballpark" promotion, in which a group of 75 fans will do just this via the Clark Fork River that runs just past the outfield fence. Osprey vice president Jeff Griffin said that this is something that the team has wanted to do ever since it moved into Ogren Park Allegiance Field in 2004.

"There is a boat launch 100 yards from our left-field foul pole, just a perfect location for us," he said. "Once it was put in and approved for safe use, we knew that we were going to have to have a promotion."

Griffin, now in his eighth season with the Osprey, remarks that "Float to the Ballpark" is distinctly "Missoula-ish." The Osprey already boast one of the most naturalistic environments in all of Minor League Baseball, to the point where an actual osprey lives on the Ogren Park Allegiance Field premises. The team notes on its website that this is "the only live mascot to live in its natural habitat at a stadium in pro baseball." 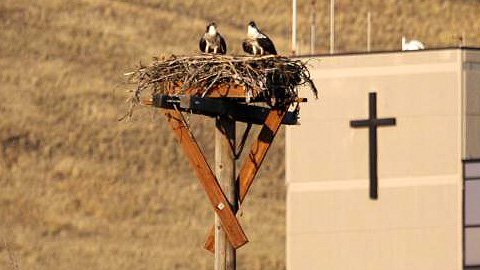 To stage "Float to the Ballpark," the team partnered with a local rafting company and put together a unique $60 ticket package. Fans will show up to the ballpark at 1 p.m. (four hours before game time), travel eastward by bus, and then enjoy a leisurely one hour and 45 minute guided float back to the ballpark. The package also includes snacks while on the raft, an Osprey hat, game program, and an all-you-can-eat BBQ meal during the ballgame.

If it all goes well, then expect the Osprey to float on into the future.

"We plan to make this a weekly event next year, and it'll be a little more affordable spread out over six or seven dates," said Griffin. "This is great for an outdoorsy community. ... It's just Missoula, it is what it is -- something that showcases the outdoors and everything we have to offer."

Minor League teams have become increasingly creative when it comes to celebrating offseason holidays at the ballpark ("1/2 Way to St. Patrick's Day" being a recent, if not quite accurate example), but the granddaddy of them all is "Christmas in July." Teams throughout the nation are indulging in a bit of summertime yuletide cheer, and a team that stands out in this regard is the Triple-A Fresno Grizzlies. The team has a brief four-game homestand from July 24-27, and each contest features a different sort of charitable initiative: the 24th is a coat drive, the 25th a shoe drive, the 26th a toy drive and the 27th a canned food drive.

"This is the first time we've done something like this," said Grizzles media relations coordinator Chris Kutz. "With kids prepping for school, and their parents going through clothes and getting rid of stuff, it seemed like a good time to do it. We're really looking forward to seeing what kind of response we get."

On each of the four nights in question, fans will receive a free game ticket in exchange for donating an item. But there will be other incentives to attend the ballgames, including festive music throughout the ballpark and gift-wrapped prizes during the between-innings contests. It all culminates on Friday, when the team gives away gnome figurines of their mascot, Parker. There are limits to the Grizzlies' generosity, however.

A unique giveaway item this week comes courtesy of the Double-A Altoona Curve, which on Friday are distributing "Alex 'Not Elvis' Presley" figurines to the first 1,000 fans in attendance. The ostensible purpose of this giveaway is, in the Curve's own words, to "help former Curve outfielder Alex Presley spread the word that his name is Alex, not Elvis, Presley." They then go on to explain that the figurine "will feature the outfielder dressed in Curve Elvis gear. So maybe we're not really helping." For more giveaway-related confusion, let's head to Rochester. As you may recall, the hometown Triple-A Red Wings are hosting several dozen Scranton/Wilke-Barre Yankees games this season due to the construction occurring at the latter club's PNC Field home. And fans attending Monday's Scranton/Wilkes-Barre game in Rochester will get to pick between Robinson Cano and Dustin Pedroia jersey bags, as there will be 1,000 of each to distribute.

Those were the days

1929 was actually a pretty good year for America, provided that no one pays attention to anything that happened after Oct. 28. And it's these brighter days of the last year of the "Roaring Twenties" that the Dunedin Blue Jays will be celebrating during Saturday's "1929 Throwback Night."

"The atmosphere will be right out of the roaring '20s, with every detail set to match the period. We will be selling $.25 Cracker Jack boxes, hosting a bingo tournament throughout the night (bingo was invented in 1929!), and the Blue Jays will be donning some amazing throwback uniforms that are modeled after the golden age of baseball.

After the game, the uniforms will be auctioned off with all the proceeds going to the Dunedin Historical Society and Museum.

Tickets to the game cost just $6, a fortune by 1929 standards but an absolute bargain 83 years later.

An exceedingly brief rundown of other notable promotions happening this week, with, as usual, an emphasis on that which undulates...

July 26: In Lynchburg, the Hillcats get in the holiday spirit by giving away Christmas-themed bobbleheads featuring mascot Southpaw. ... Oh, the humanity! The Mahoning Valley Scrappers stage a baby shower for Snooki, and you're invited. ... The man, the myth, the mustache: Rollie Fingers signs autographs in Everett.

July 28: More bobbleheads! Josh Hamilton in Bakersfield, Bill Buckner in Boise, Carlos Gonzalez in Colorado Springs and Josh Bard in Pawtucket. ... The Charleston RiverDogs go where no team has gone before with a "jort patch giveaway" as part of their evening-long "Salute to Jorts." ... It's the Lakewood BlueClaws' annual "BruceClaws" Night, during which the team pays tribute to Bruce Springsteen and the music he created.

July 29: The Columbus Clippers' series of local icon bobbleheads continues, and this time the honoree is legendary Olympian Jesse Owens. ... In Mahoning Valley, the Scrappers host their third annual "Backyard Brawl" wrestling extravaganza. ... The Lowell Spinners drop $1,000 from a helicopter, to be collected by 20 "local heroes."

July 30: The Hudson Valley Renegades get political, as they're distributing bobbleheads of local politician Marc Molinaro. ... The Tulsa Drillers get fantastical, as they're distributing Mark "Captain Teixeirica" superhero bobbleheads. ... One day after dropping a grand from a helicopter, the Lowell Spinners stuff $1,000 amongst the hot dogs they'll be selling that evening.

July 31: It's "Goochland Night" in Richmond, as the Flying Squirrels give away bobbleheads of Justin Verlander wearing the uniform of his Goochland High School alma mater.