Hillcats' Lipka hits for the cycle 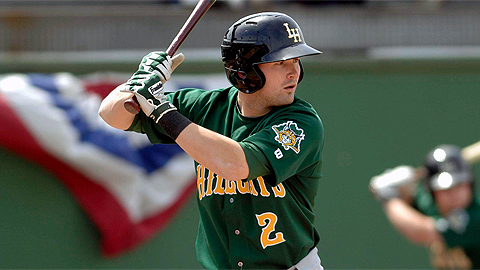 Matt Lipka was in a 1-for-18 skid in his past five games. (John Absalon/MiLB.com)

After tearing his hamstring last summer, Matt Lipka knew that his recovery would be slow and gradual. For a youngster that considers speed his No. 1 tool, not being able to walk is a harsh setback.

The shortstop-turned-outfielder knows Thursday's big game does not mean his recovery is complete, but he realizes that it is a step in the right direction. It might have seemed to others like a full-out sprint that way.

The Braves' No. 8 prospect went 4-for-5, hitting for the cycle and plating a career-high five RBIs in the Class A Advanced Lynchburg Hillcats' 15-8 rout of the host Winston-Salem Dash.

"Getting into live games is all about getting the feel back, getting your legs back under you over time," Lipka said. "It's pretty humbling, going from playing well to then basically having to learn how to walk again. It's a long process."

"I think I have been the home run short before, that's not my game," Lipka said of his fifth longball in four pro seasons. "I only usually get one to three a year. The chance of it happening is pretty rare.

"But I felt super relaxed. Since the injury I haven't felt super comfortable, but I was relaxed in the box that time and everything was real loose. It was a 2-1 fastball, I saw the ball well and I got my foot down."

Lipka then tripled home two runs on a ball in the left-center field gap in the sixth frame before coasting into first base on a ball down the third-base line in the ninth.

After fouling the first pitch he saw from Jeremy Erben back to the screen behind home plate, Lipka turned on the second offering and yanked it deep into the corner. With his speed, it could have been a stand-up double, but -- knowing the situation -- the 21-year-old jogged into first.

"We were up six runs and I knew it wasn't going to hurt the team," Lipka said. "My teammates told me that if I hit one in the gap I had to hold up at first. I gave it a pretty hard long thought between [first and second]. But it was a once-in-a-lifetime opportunity.

"My teammates were unreal. They got me six at-bats and we had almost 20 hits as a team. Tonight isn't really about me, it's about us all coming along at once. It was all pretty special to watch."

It was the first cycle in the four-year history of BB&T Ballpark. The last Hillcat to hit for the cycle was Dan Brewer, who accomplished the feat last July 29 in a 9-3 win over Salem.

Selected by the Braves 35th overall in the 2010 Draft, Lipka played just 51 games last before before his injury on June 23. The tendon in his hamstring tore completely from the bone -- known medically as a distal rupture of the semiltendinosus -- and it needed to be reinserted with a anchor.

This surgery was followed by three months of rehab and Lipka began hitting again toward the end of October with Dodgers prospect and friend Zach Lee in Texas.

"With the injury and how many games I've missed, it's hard to just make those at-bats up, he said. "I think I need about 100 at-bats."

Lynchburg erupted for a season-best 19 hits, including 12 extra-base hits.

Cleanup hitter Robby Hefflinger was 4-for-5 with two doubles, a triple, a walk, four runs scored and an RBI, while Kyle Kubitza and David Rohm -- the No. 5 and 6 hitters -- combined for five doubles, eight RBIs and five runs.

Ashley Marshall is a contributor to MLB.com. Follow him on Twitter @AshMarshallMLB. This story was not subject to the approval of the National Association of Professional Baseball Leagues or its clubs.