California Burritos give fans their fill 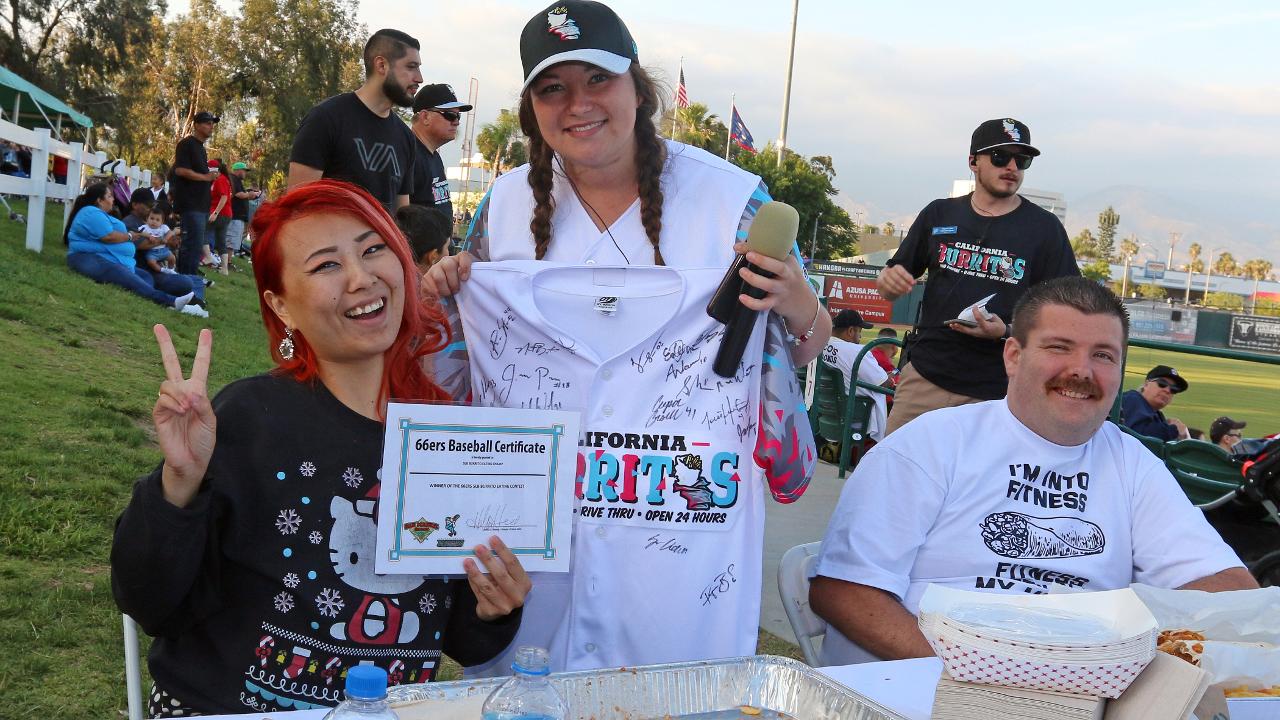 SAN BERNARDINO, Calif. -- Even within the state, not everybody knows exactly what a California burrito is. But those who do know tend to proselytize.

On Saturday night, the Inland Empire 66ers did their part to spread the word about the regional delicacy that features carne asada, guacamole and french fries. The Class A Advanced affiliate of the Angels took the field with specially designed California Burritos uniforms, hosted burrito-related contests and welcomed trucks from local burrito vendors into the ballpark.

"Once someone comes to Southern California, they keep coming back for the burritos," said fan John Crewdson, who, already bedecked in a T-shirt celebrating California burritos, made the drive with his wife, Liz, from San Diego to San Manuel Stadium for the first time. "My wife was looking around online. She goes, 'Oh, we've got to go!' And the Padres are out of town, so what better time?

"For Southern California, we've got to have our California burritos, and it's really cool that Inland Empire is doing the California Burrito Night tonight."

As far as the 66ers were concerned, it wasn't all that important that fans nationwide immediately knew what was in a California burrito, which are especially popular in San Diego, Imperial, Riverside, Orange and San Bernardino counties. According to an in-game ballpark announcement, they were invented in San Diego in the 1980s.

"We talked about this a lot in our [offseason] promo meetings," general manager Joe Hudson said. "We were like, 'Is everybody going to know what this is?' And I said, 'Yeah, but you know what? We're in the state of California. Everybody knows what a burrito is. It can go either way.' And I think it's even more unique that the California burrito is a specific thing."

Hudson had watched with interest as more and more teams around the Minors adopted temporary identities in honor of regional favorite foods, and over the offseason raised the idea of doing one with his staff. There's a running joke in the office about Hudson's affinity for California burritos, but the team also considered going with an avocado theme before deciding on the more challenging but, in Hudson's view, more fun option.

Two people in the ballpark gained a deeper understanding of the precise nature of the California burrito than perhaps anybody else had previously attained in all of human history. Morgan Mahaffey, a 66ers fan from nearby Mentone, and Walnut-based competitive eater Raina Huang squared off in a contest to devour an 18-inch, five-pound burrito (actually, four pounds were burrito; one pound was french fries piled outside the tortillas) donated by local favorite Rosa Maria's.

Neither contestant was able to complete the gastronomical task by the time Mahaffey announced he was done. The pair sat back and shook hands about 32 minutes after starting, and Huang's tray was nearly clear.

"That is a very, very tough burrito -- the fries!" she said. "There are so much tortillas, too. Then beans, cheese, the [carne asada]. ... It was just so filling.

"Plus the longer you sit here, the faster you're going to feel full. If I couldn't do it within 20 or 30 minutes, I'm done. There's no way -- I'm not going to be able to finish any more."

Mahaffey, who wore a shirt bearing the words, "I'm into fitness ... Fitness whole burrito in my mouth," was beaten in the contest, but the way he saw it, competing was a win-win situation.

"I had no idea what I was getting myself in for. I'm stuffed," he said. "But, worst-case scenario, I got free baseball game tickets and a free dinner out of it."

Huang got the same, as well as a team-signed Burritos jersey.

Mahaffey earned his spot at the table by answering the team's call for contestants with an email Hudson characterized as full of humor and abundantly convincing of Mahaffey's affection for burritos. At the time he sent that email, Mahaffey didn't know he'd be up against a seasoned competitive eater. Nonetheless, he was undaunted as Huang ripped into her burrito with both hands and shoved fistfuls into her mouth.

"Food's food," he said. "Pro or amateur, we both sat here and ate. It helped she was very pleasant to speak to. She wasn't mean or rough about it. It was fun."

The uniforms and fan merchandise were designed with fun in mind, too. The main logo is a burrito with fries emerging out of the top, tinfoil wrapped on the bottom, shaped like the state of California. The font on the jerseys and T-shirts is multi-colored and bright, with the burrito logo in place of the "O" in the word "Burritos."

"When they released the logo for this, I knew I had to come. I kind of collect hats, and when I saw the Burritos..." he said. "I've had [a California burrito] only once, because there's only one place in Manhattan Beach you can get them. I like regular burritos better, to be honest, but the logo is awesome."

Bogen became more acquainted with California burritos as the night wore on, sampling the goods from three local vendors and casting a vote for the best California burrito. This contest pitted in-stadium Mexican food restaurant Sophia's against trucks from Cuca's and Miguel's Jr. Bogen voted for Cuca's and predicted they would win. He was right.

Pep Fernandez, a journalist and host of The Inland Sports Show, was on the official panel of judges with Hudson and 66ers fan Joe McIntyre. He picked Cuca's, too.

Not all who enjoyed California Burritos Night were natives of the state. Dominic and Giuseppe Borelli came from Mesa, Arizona. The brothers had decided to take in some Minor League Baseball over Memorial Day weekend, and, having checked the promotional calendars of all Minor League teams in California, were most excited about the offerings in San Bernardino, where the 66ers played as their Copa de la Diversión identity (Los Cucuys de San Bernardino) on Friday before a Mike Trout bobblehead giveaway on California Burritos Night.

"We decided to go over a weekend, and this looked like the funnest weekend," Giuseppe Borelli said.

The Borellis weren't the only out-of-staters who enjoyed the night, either. Right-hander Andrew Wantz was the winner in the Burritos' 3-1 victory over the Stockton Ports. Asked during a postgame, on-field interview about his favorite item in a burrito, Wantz gave the question serious consideration.