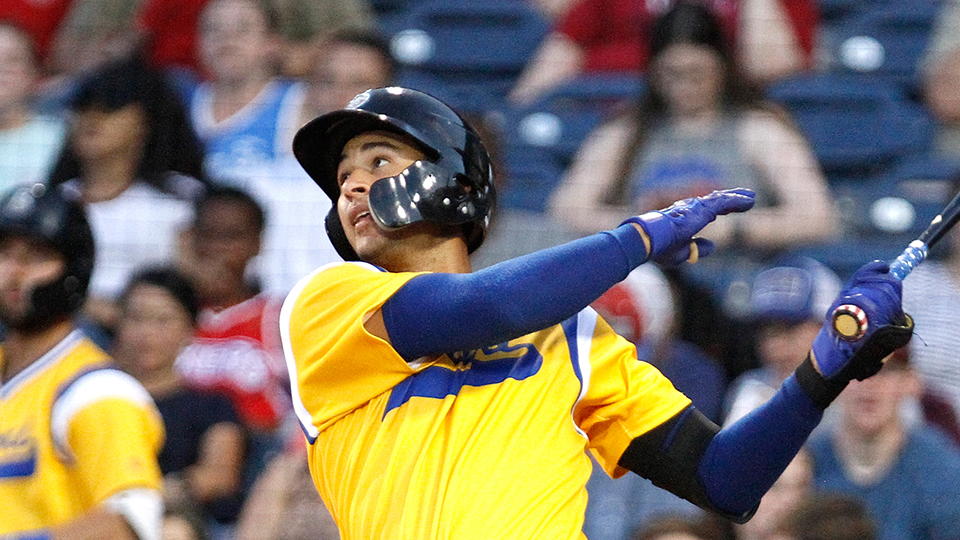 Jake Gatewood has been an important presence in Double-A Biloxi's lineup throughout the Southern League playoffs, and he came through again Saturday night.

The Brewers prospect launched his fourth home run of the postseason to lead the Shuckers to a 4-2 victory over the Generals at the Ballpark at Jackson to force a winner-take-all Game 5 in the Championship Series.

"It's awesome. We're being competitive out there and it almost feels like we're all playing back in high school ... how you play to win all the time," Gatewood said. "It's so much fun being around this group of guys. We've had a couple of special teams here over the last two years. Different teams in a lot of ways, but the same type of chemistry."

The corner infielder came into the game with three long balls, eight RBIs and a .333/.333/.606 slash line across eight postseason games. In the 2016 Midwest League playoffs with Class A Wisconsin, he went 0-for-8 at the plate over two contests.

In the opener of the Southern League Finals, the 2014 first-round pick posted a two-hit, two-RBI night. But across the next two contests, Gatewood went hitless as Jackson took an edge in the series.

But with the Shuckers up, 2-1, in the fourth inning Saturday, the 23-year-old reversed course with one swing of the bat. He ambushed the first pitch from right-hander Bo Takahashi, sending it deep over the wall in left field. The two had plenty of regular-season experience against each other as Gatewood has gone 3-for-16 with two doubles against the hurler since the 2015 season. This time he added a homer to his ledger.

"I've faced him a lot. I've been facing him since he was in [Rookie Advanced] Missoula," said Gatewood, who went yard 13 times in the regular season. "He's a really good pitcher. He's got really good stuff -- he's nasty. He kind of throws like one of my old teammates, Jordan Yamamoto. I took the same approach as if I were to face [Yamamoto]. They're both really good pitchers, so I was just trying to be aggressive.

"I squared it up pretty good. I didn't really feel it coming off the bat. I know it's a good thing as soon as I feel that."

Ninth-ranked Brewers prospect Mario Feliciano singled in two runs in the third and finished the game with two hits and a run scored. The 20-year-old has batted .400 with a .900 OPS in the Championship Series.

Right-hander Tyler Spurlin (1-0) earned the win in relief, allowing a walk over 1 1/3 scoreless innings. Nate Griep picked up his second save of the series after fanning one in a perfect ninth.

Biloxi sits one win away from the Southern League crown after falling to Jackson in the Finals one year ago. Gatewood, who suffered an ACL tear in 2018, missed last year's playoffs.

"I got to watch the last couple of games of the series in Biloxi, so I was with the team. Man, that was a heartbreaking loss to Jackson, because we felt we were the best team in that league," he said. "It was tough to lose at the end there. We do have some of the same players from last year's team, so it's kind of motivated us to keep everyone's energy up and lead this team to a victory. It's crazy that it ended up being the same thing as last year, but that's just a testament to both organizations."

Game 5 will be Sunday in Jackson.