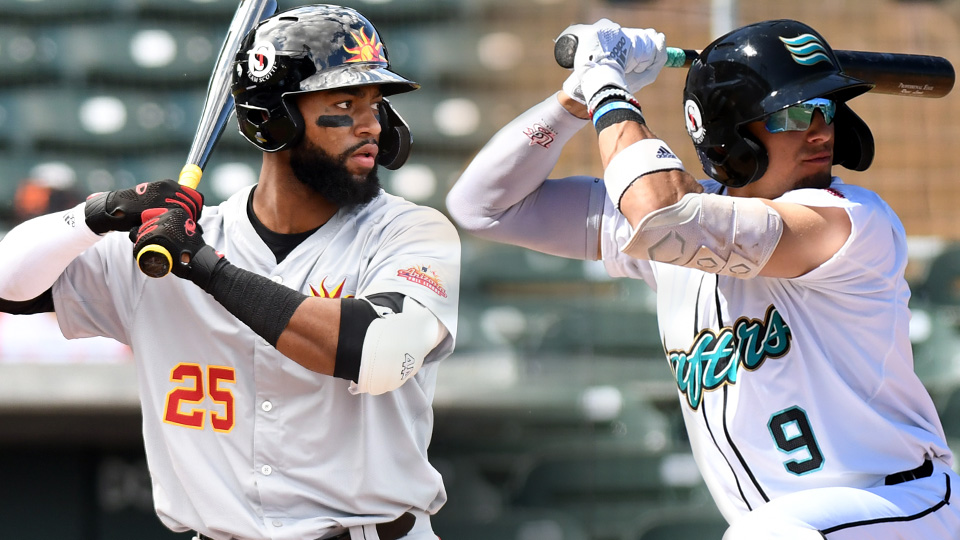 Jo Adell and Royce Lewis will be part of a loaded East Division squad on Saturday. (Buck Davidson/MLB.com)

The stars of Arizona will rise most heavily in the East this weekend.

Twelve of MLB.com's Top-100 prospects -- nine from the East Division and three from West -- were named to the Arizona Fall League Fall Stars Game rosters on Tuesday. The AFL's version of the mid-autumn classic will be held Saturday at 8 p.m. ET at the Salt River Fields at Talking Stick and will be streamed at MLB.com/AFL.

Made up of players from the Salt River, Mesa and Scottsdale rosters, the East has the more eye-popping roster. No. 5 overall prospect and Angels outfielder Jo Adell began the fall campaign as the circuit's biggest name and hasn't disappointed by hitting .293/.369/.500 through 13 games for Mesa. The East infield truly impresses with Top-100 prospects potentially playing all over the dirt in D-backs first baseman Seth Beer (No. 96), Phillies corner infielder Alec Bohm (No. 34), Rays second baseman Vidal Brujan (No. 39), Mets shortstop Andres Gimenez (No. 92) and Twins shortstop/third baseman Royce Lewis (No. 9).

The East is also loaded at catcher with No. 19 Joey Bart (Giants) and No. 90 Miguel Amaya (Cubs) set to assume duties behind the plate. Rays right-hander and No. 94 overall prospect Shane Baz is the only Top-100 representative on the East pitching staff.

Beyond big prospect names, the East will also boast major statistical performers. A's outfield prospect Greg Deichmann will suit up for the East after leading the AFL with five homers and 31 total bases through 12 games for Mesa. Bart leads the circuit with his .793 slugging percentage and 1.306 OPS. Among the pitchers, Marlins and Salt River right-hander Nick Neidert is tied for third with 17 strikeouts in four Fall League starts.

Representing the West -- a roster made up of players from Surprise, Peoria and Glendale -- will be three Top-100 prospects. Mariners and Peoria outfielder Julio Rodriguez leads the way at No. 25 overall, along with Royals left-hander Daniel Lynch (No. 69) and Nationals shortstop Luis Garcia (No. 91).

Fans will get a chance to vote for the 26th man on both rosters. White Sox outfielder Blake Rutherford, Dodgers shortstop Omar Estevez and Pirates shortstop Oneil Cruz are the options in the West while Rays catcher Ronaldo Hernandez, Indians third baseman Nolan Jones and Marlins outfielder Jerar Encarnacion are eligible in the East. Voting can also be done at MLB.com/AFL and runs until Thursday at 3 p.m. ET.