Royals No. 4 prospect strikes out seven over seven innings 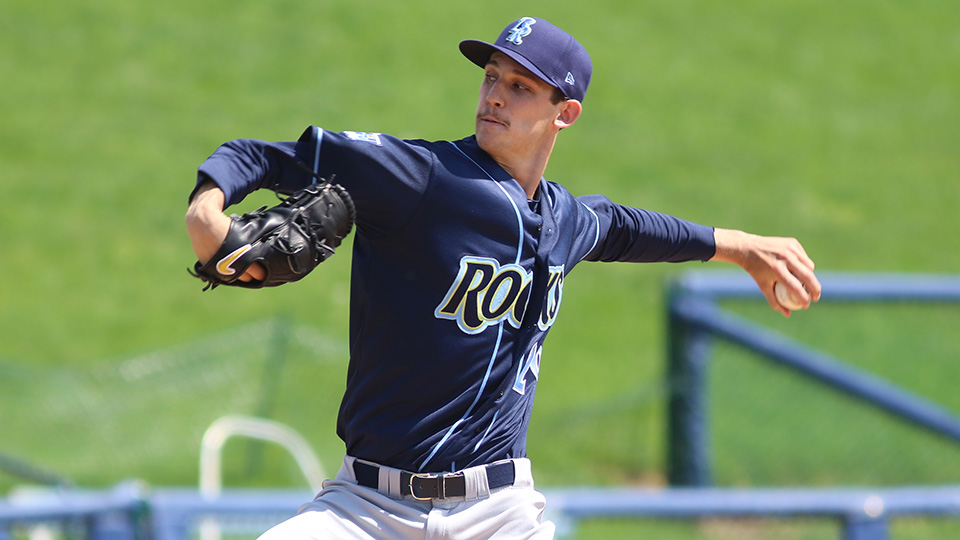 Daniel Lynch moved into third place in the Carolina League with a 3.00 ERA and is tied for fifth with 51 strikeouts. (Andy Grosh/MiLB.com)

A little less than three weeks ago, Daniel Lynch had perhaps the worst start of his professional career. In his three starts since, he's been absolutely dynamite.

The Royals' fourth-ranked prospect dealt seven scoreless innings Saturday, striking out seven while scattering five hits and a walk, as Class A Advanced Wilmington defeated Myrtle Beach, 2-1, at Frawley Stadium. It marked the third straight scoreless outing for Lynch, who has not surrendered a run in his last 22 frames.

The 22-year-old was consistently sharp, allowing more than one baserunner in an inning just once. That number could've been higher if not for his defense, according to Lynch.

"The guys behind me played great defense and that helped a lot," he said. "There was a couple of ground balls that were in-between, sort of in-between hops right between guys and they put good plays on it. It's pretty easy to trust your defense when they're playing like that."

The lone bit of trouble Lynch (4-2) encountered came in the fifth, when Jhonny Bethencourt reached on a bunt single and advanced on a wild pitch before Zach Davis walked with one out. Lynch calmed himself, getting Jimmy Herron to go down on strikes for the second out. That defense came through as catcher and Royals No. 3 prospect MJ Melendez threw out Bethencourt trying to steal third to end the inning and stifle the Pelicans' first semblance of a rally.

"You got to love a guy that can throw guys out, especially against a team like this who likes to run," Lynch said of his batterymate.

His hot streak follows a May 8 outing in which he allowed five runs and 10 hits -- both career highs -- over four innings in a 6-1 loss to Salem. And while he didn't necessarily make a point to atone for that bad outing, he said being able to put it behind him and not let it damage his confidence has been a key to his ensuing success.

"I did a good job of just taking what I did well that start and then moving on and just sort of flushing it," he said. "I wouldn't say that that's the reason why these starts have been better, but I definitely think that not letting [the thought of], 'Oh, god, I just gave up five runs,' affect me was what allowed me to get back in the groove of things."

The 34th overall pick in last year's Draft has an even 3.00 ERA in his first full professional season. In 12 starts last summer between Rookie Advanced Burlington and Class A Lexington, he stitched together a 1.58 ERA and struck out 61 over 51 1/3 innings.

Lynch's 3.00 ERA is second among regular Blue Rocks starters, just behind top Royals prospect Brady Singer (2.13) and just ahead of seventh-ranked Jackson Kowar (3.31). That trio looms large in Kansas City's future, so to see them succeed together early in their careers is cause for excitement.

"When we all three have outings back-to-back-to-back that are quality, it's a lot of fun to watch," Lynch said.

And it's not just that trio. Wilmington ranks second in the Carolina League with a 3.09 team ERA, just behind Down East (2.89). When everybody is pitching that well, Lynch said, the success is contagious.

"Everybody on the staff, it's not just [Singer and Kowar] ... it's kind of like a lot of momentum right now, that everyone's really throwing the ball well," he added.

The Blue Rocks gave Lynch all the support he needed in the second inning, thanks to another group of top-ranked youngsters. Royals No. 5 prospect Nick Pratto led things off with a walk and Melendez followed with a single. After No. 6 Seuly Matias walked to load the bases, 16th-ranked Brewer Hicklen singled to left field off left-hander Luis Lugo to plate Pratto and Melendez for Wilmington's only runs.