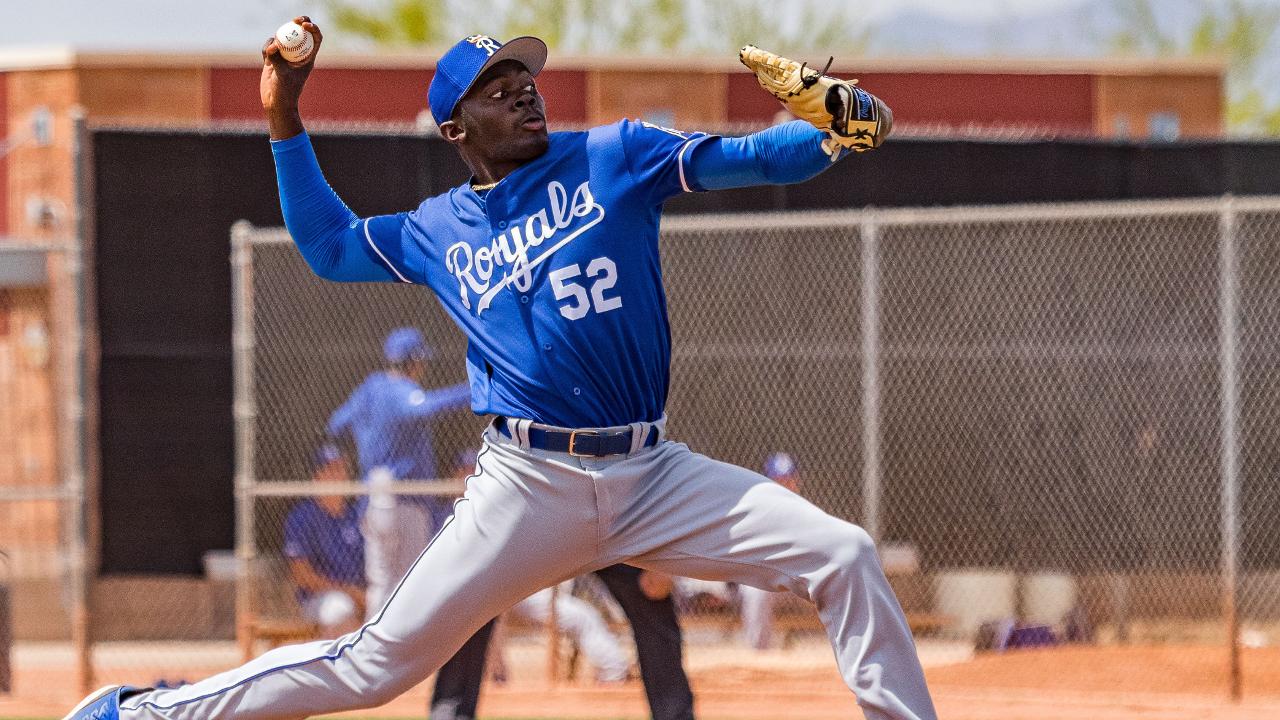 While four-strikeout innings are impressive, five-strikeout frames are nearly unheard of. But that's exactly what reliever Malcolm Van Buren recorded in the seventh inning of Rookie Advanced Burlington's 7-6 win over Elizabethton on Wednesday night at Burlington Athletic Stadium.

Here&#39;s the moment that Malcolm Van Buren made history for @BRoyalsKC.

He had 4 Ks in the inning from a pair of dropped third strikes. With two outs and the bases juiced, he gets #5.

"Honestly, I was kind of struggling with command at the time," Van Buren said.

The right-hander began the inning simply enough, when Seth Gray swung and missed at a 3-2 curveball low in the zone. Parker Phillips whiffed at a 1-2 curve in the dirt for what should've been the second out, but he reached on a throwing error by catcher Jesus Atencio.

"I didn't really realize that he struck out also," Van Buren said, "because I was trying to focus and get in the zone."

Twins No. 15 prospect Matt Wallner fanned on a 3-2 fastball, a foul tip that Atencio held on to for Van Buren's third strikeout of the frame. He said the entire inning felt like a blur as he was concentrating on retiring the next hitter.

Trevor Jensen swung at the sixth offering from the 21-year-old for strike three, but the pitch got away from Atencio. Jensen reached first and Phillips advanced to second, so the inning continued, despite Van Buren's fourth strikeout.

"It wasn't very close to the zone," he said. "It bounced in front of the left-handed batter's box, so I think he was thinking straight fastball. So he just threw his hands at it and got around the curveball a little bit."

After Anthony Prato walked to load the bases, Van Buren got a visit from pitching coach Carlos Martinez. Martinez didn't mention how many strikeouts he had in the inning, focusing on getting him mentally prepared for the next hitter, who the coach said would be his last. The South Carolina native proceeded to strike out Will Holland on three pitches to complete one of baseball's rarest feats.

Van Buren was pumped as he walked off the mound, pleased that he executed his pitches and got out of a jam. But he said he still had no idea what he'd accomplished.

"I didn't realize that I struck out five guys in an inning until I walked back to the dugout," he said.

There, he got high-fives from excited teammates and was told by hitting coach Andy LaRoche that he'd just done something incredibly rare.

"I didn't really realize how good that was until I sat down and relaxed," he said.

The last five-strikeout inning by one Minor League pitcher was thrown by Andrew Kittredge of now-defunct Class A Advanced High Desert -- also in the seventh -- on July 1, 2014 against Rancho Cucamonga. Coincidentally, he started Wednesday's game for the Tampa Bay Rays at Fenway Park. James Reeves and Andrew Schwaab combined on the feat for Class A Charleston against Augusta on April 21, 2016.

As he looked at the wrestling-style championship belt given to the Royals' player of the game, Van Buren began to contemplate his newfound place in history.

"That's pretty cool, honestly," he said. "It's definitely not something I'd ever say I expected to do."

Burle Dixon lined an RBI single to right field with one out in the eighth that snapped a 6-6 tie. He and leadoff man Maikel Garcia had three hits apiece for Burlington, which overcame an early six-run deficit.