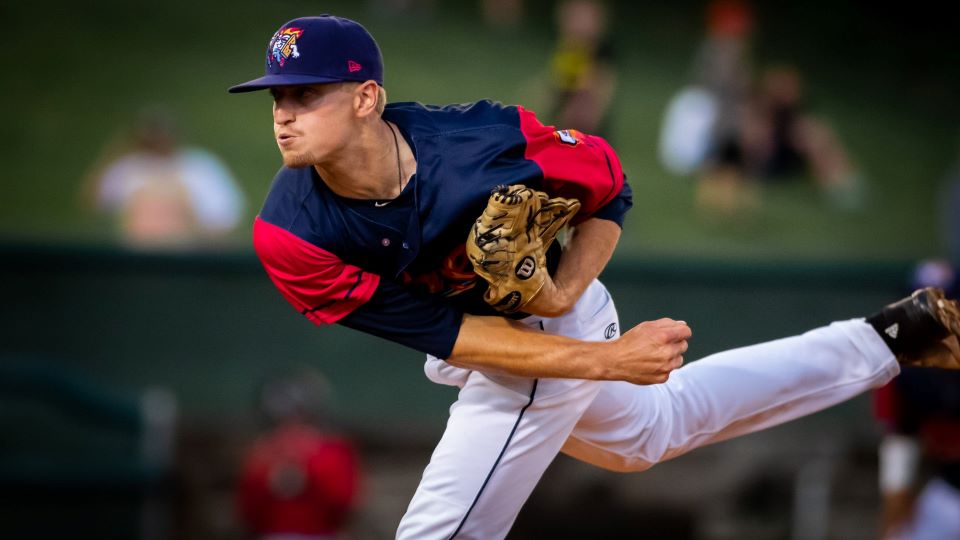 Karsen Lindell struck out 54 through his first 38 1/3 innings back in the Milwaukee organization this year. (Bobby Stevens/MiLB.com)

Two years ago, nobody expected Karsen Lindell to be back in professional baseball. In fact, Lindell himself was convinced he'd never play again.

But time is a funny thing, and if there's anything he's learned in the interim, it's to never underestimate the power of your own motivation.

When Lindell was released from the Brewers in the winter of 2017, it marked a personal low. Selected in the ninth round out of his Oregon high school in the 2015 Draft, he didn't exactly score the success he'd envisioned in his first professional year in the Rookie-level Arizona League. However, an 18-year-old struggling with the transition from high school ball to pro ball isn't necessarily unusual, and there was reasonable to believe he'd find his way the next year.

Except he didn't. Through the following two seasons with the Helena Brewers in the Rookie Advanced Pioneer League, Lindell never found his footing, posting a collective 7.92 ERA in that time. After the conclusion of the 2017 season -- in which he'd surrendered 45 earned runs over 54 1/3 innings -- he was released from the organization.

"I wasn't really myself," Lindell said. "I was pitching scared and I didn't know if I belonged here. Coming from high school to professional baseball was a big jump for me.

"After I got released, I just didn't want to play anymore," he said. "I didn't think I was good enough."

So, Lindell hung up the spikes. Unemployed and without a plan, he enrolled in classes at Linn-Benton Community College near Corvallis, Oregon. He wasn't training, but he was still following the game, especially at the college level. And when nearby powerhouse Oregon State went on a gripping playoff run in 2018, Lindell became more and more intrigued. The Beavers brought home a College World Series title that year. And Lindell brought home inspiration.

He remembers exactly when the idea of a return to the mound first formed.

"I was at [Oregon State's] super regional against Minnesota," he said. "I just couldn't stop thinking about getting back on the field and playing. It just sparked me. I didn't care where. I just wanted to play."

Suddenly, he was eager to pitch again. He was ready to prove evaluators -- and himself -- wrong.

"He wasn't really a fan of me," Lindell laughed. "He didn't think I was committed to it."

"That's true," Boddy echoed. "That would be an accurate statement."

Boddy didn't believe that Lindell was serious about making a comeback, citing unreturned phone calls and what he perceived as excuses early on in their relationship. He wasn't going to go out on a limb for Lindell. If the righty wanted to train with Driveline, he'd have to make connections with staff members himself. For six weeks, Lindell was training at Driveline, and Boddy had no idea.

"I really trust my staff," he said. "I saw the jump. I saw his progressions and I asked [the staff] how. He's such a good athlete, of course, but he was also so compliant. He was here five days a week, doing all the work and being diligent. I was really impressed. Every guy, top to bottom, had nothing but good things to say about him. That's what made me change my mind."

Lindell continued training at Driveline and Boddy even hired him as a staff member. Over the next few months, his velocity ticked up, his command improved and his motivation swelled. When he first began training in August, his maximum velocity tapped out at 89 mph. By November, he was consistently hitting 95 mph. His revamped his arsenal, adding a mixture of off-speed pitches, including a splitter. He remained in contact with the Milwaukee organization, and before he knew it, he was scheduled to work out at their Spring Training complex in Maryvale, Arizona.

Lindell threw a bullpen for the Brewers in February, but it didn't appear to bowl over the organization. He waited for a call. None came. So he returned to Washington and joined the Seattle Studs, a semi-professional team.

In his only game, Lindell racked up eight strikeouts in three innings. The Brewers rang soon after. They wanted him back.

"My whole thing is, if I get a hitter in there, it changes my mind-set to be more competitive," Lindell said. "I think they wanted to wait until I got a game in. I heard back from them within 48 hours."

A few months later, Lindell is a reliable reliever for the Rookie Advanced Rocky Mountain Vibes in their inaugural season. He holds a 1-1 record with a 3.71 ERA in 14 appearances and has limited opposing hitters to a .206 average. And he was named a Pioneer League All-Star, striking out a batter in his appearance in the bottom of the ninth inning of the Northwest/Pioneer League All-Star Game on Aug. 8.

He bears little resemblance to the pitcher he was in his first crack at pro ball.

"Talent can give you an opportunity, but character will keep you there. Your character can also give you another chance," Vibes pitching coach Michael Schlact said. "Karsen is a humble guy that understands he's on borrowed time, so to speak. He realizes he already had a chance once and lost it, and he wants to do everything possible to not lose it again."

Schlact wasn't with the organization for Lindell's first stint. To him, that doesn't matter. In Schlact's opinion, what Lindell has done has warranted a second chance.

"He's one of the first guys here, doing exactly what we're telling him to do from a pitching side," Schlact said. "He's doing exactly what strength and conditioning is telling him. He's doing what he needs to do in the training room. From all areas, he realizes that he needs to do those things to be successful. And he'd be the first to tell you that he may not have taken that as seriously as he should've the first time."

The Brewers aren't sure what's next for Lindell, who is already 23. With only a few weeks left in the season, a promotion isn't likely. He's not a ranked prospect. He's lost a lot of time and made plenty of mistakes along the way. It would be easy to be resentful about that. Instead, Lindell's grateful for the experience. It's what's made his journey unique, and it continues to fuel him each day.

"I think this all happened for a reason," he said. "Without having failure, it wouldn't have kicked me into making myself better. I'm sure eventually I would've figured it out, but I think the path that I went, I needed to understand what it's like to be without a job and essentially fight for one again."

For now, Lindell will focus on the end of his second first season. He'll carry his focus into and throughout the offseason, something he feels he should have done better before. And he'll remain the humble, hard-working athlete that he's become.

"I'm still not totally satisfied, because I know I can do better," he said. "I've got all the motivation I need. It's going to be a fun ride."