Kickin' it: Cubs' Assad pulls off wild out 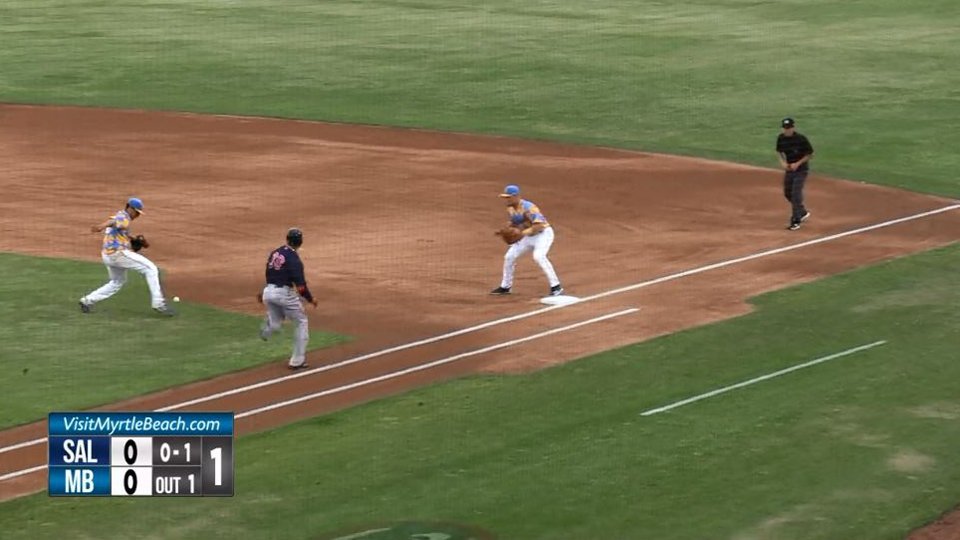 Javier Assad went on to record his first win of the season, pitching six scoreless innings for Myrtle Beach. (MiLB.TV)

Cam Balego headed to the first base bag anticipating a no-sweat putout. Then he found himself doing his best Tim Howard impression.

Balego was on the receiving end of one of the unlikeliest outs of the season -- any season, really -- when he caught a kicked ball at first from his starting pitcher, Javier Assad, in the first inning of Class A Advanced Myrtle Beach's 12-2 win over Salem at TicketReturn.com Field.

Video: Pelicans' Assad kicks for out

"I was just kind of in the hole and saw the push bunt by [Marco Hernandez]," first baseman Balego explained. "Our pitcher was the only guy that could've made a play on the baseball, so I shot right to the bag. Right before that, I told our second baseman to be ready for a push bunt because we got the scouting report on it. I saw the push bunt and went to cover the base and saw Javier pick it up. I was like, 'Oh, this is an easy play.'

"The next thing I know, I've got a baseball being kicked at me."

Hustling after the bunt toward the first base side of the mound, Assad fielded it cleanly but momentarily fumbled the ball in his track toward the bag. With Hernandez closing on first, the right-hander exercised one of his only available options and kicked a perfect strike to a waiting Balego.

"It was a bang-bang play at first. It was crazy," Balego said.

To the first baseman's credit, he never gave up on the play, reacting immediately to snare the boot and secure the out.

"At first, I saw it fumbled and thought the play was going to be ended," Balego said. "The next thing you know, I have a baseball at my chest and was like, 'Oh, wow,' and kind of processed it, that he kicked it to me. It was kind of crazy, him kicking a baseball. Usually, you'll see if a ball's foul, a guy will kick a ball foul or something like that. Seeing someone kick a ball up to make a play is kind of crazy. It honestly caught me off-guard."

Balego has been on the other end of weird plays at first before, but nothing like Friday.

"I had a play in college where the ball got stuck in the glove and it was flipped to me, so I've caught a full glove before," he said. "But I think playing Hacky Sack with a baseball is probably the craziest thing that's ever happened to me."

Myrtle Beach went on to rack up 15 hits in the win, supporting Assad, who went six scoreless innings for his first win of the season. Balego has some ideas for where the pitcher can go from here.

"I think we're going to have to have [pitchers' fielding practice] practicing kicking baseballs after that happened," he said. "If a kickball [game] ever happens or we're going to play Hacky Sack or soccer, I know who I'm going to pick. If an NFL team's looking for a kicker, I've got a friend they can call."