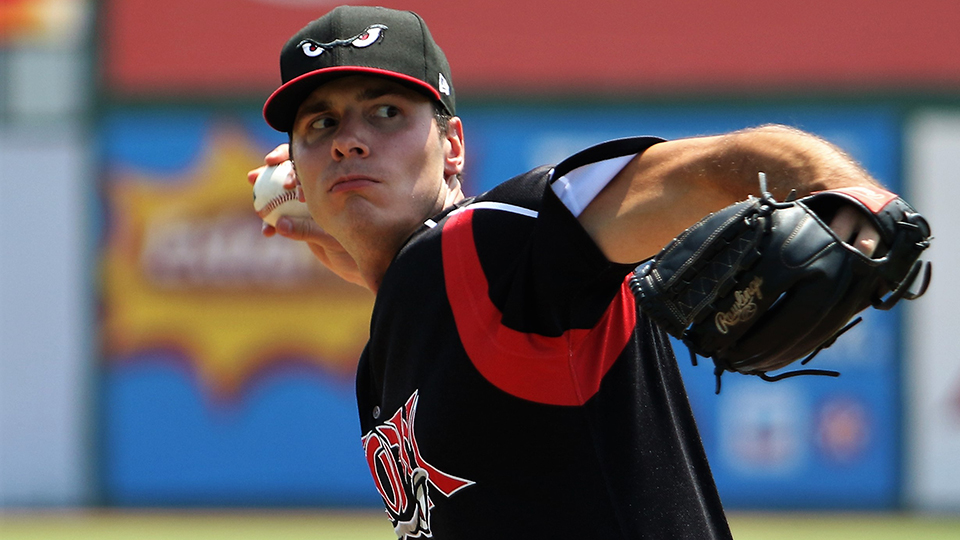 Elliot Ashbeck would lead the Cal League with a .169 opponents' batting average if he had the innings to qualify. (Jerry Espinoza/MiLB.com)

The third time was the charm for Elliot Ashbeck.

The Padres prospect recorded a career-high 15 strikeouts in just his third start of the season, pitching Class A Advanced Lake Elsinore to an 11-5 win over Rancho Cucamonga on Sunday at LoanMart Field. He gave up a run on three hits while establishing a Minor League season high for punchouts.

It'd be easy to boast following a performance like that, especially after learning you topped everyone in the Minors the way Ashbeck (3-0) did. And while the 25-year-old is proud of his stellar showing, he's while making sure to keep it in context.

"I was drafted in '15, so I've been around a little bit now," he said. "Nothing, I guess, comes as too shocking. Obviously, it's really awesome and really cool to put together a day like that. I think it kind of happened to be against the right team and my style."

Ashbeck was dominant from the outset, carrying a no-hitter through four innings while fanning 10. He surrendered a leadoff double in the fifth to Donovan Casey, who scored on another two-bagger by Jordan Procyshen. The right-hander limited the damage, though, getting Brayan Morales to fly to right and striking out Jeren Kendall.

Ashbeck flipped on the cruise control after that, striking out three more Quakes and allowing one hit over his final two frames. For a guy like him who's operated almost exclusively as a long reliever as a professional, getting through the first few frames was familiar territory. It was that middle stretch -- the bumpy fifth inning -- that was the real hurdle.

Once he'd cleared it, though, it was smooth sailing again.

The difference-maker for Ashbeck was his off-speed stuff. Particularly early in counts, he delivered a heavy dose of sliders and curveballs, something he knew would counter Rancho Cucamonga's typical method of attack. Playing those pitches off his fastball allowed him to stay in control and keep the Quakes off-balance.

"They're a really fastball-hunting team, and that's their M.O.," he said. "I'm not the most overpowering guy with the heater, so I was able to mix my off-speed pitches and throw them all for strikes. Today, I was able to kind of blend them ... and just played everything nicely off of each other."

He finished one strikeout short of the team record, set by Ben Howard on June 24, 2001 against Visalia. His previous career high was seven punchouts on April 22, 2016 for Class A Fort Wayne.

The Bradley University product dropped his ERA to 2.15, and he's struck out 50 batters over 46 2/3 innings. In his three starts this year, he's given up four runs while whiffing 21 over 13 1/3 innings. He's been similarly steady since the Padres selected him in the 15th round of the 2015 Draft, compiling a 2.56 ERA over five seasons. Last year between the California and Texas leagues, he posted a 3.22 clip with 82 strikeouts over 78 1/3 innings.

While it's no guarantee that Sunday's performance will lead to a full-time role in the rotation, it's certainly going to provide some positive momentum moving forward in Ashbeck's development as a pitcher, no matter the role. However, the key to capitalizing on that, he said, is to ultimately put it behind him.

"I had a pretty good last year and gotten off to a pretty good start this year," he said. "So I don't want to lose sight of that at all over one really good outing. Just keep my foot on the gas and keep moving forward."

Esteury Ruiz went 3-for-5 with three runs scored and an RBI for Lake Elsinore, falling a homer short of the cycle. Padres No. 22 prospect Gabriel Arias doubled, singled and knocked in four runs.