Dodgers No. 3 prospect thriving with advice from L.A.'s veterans 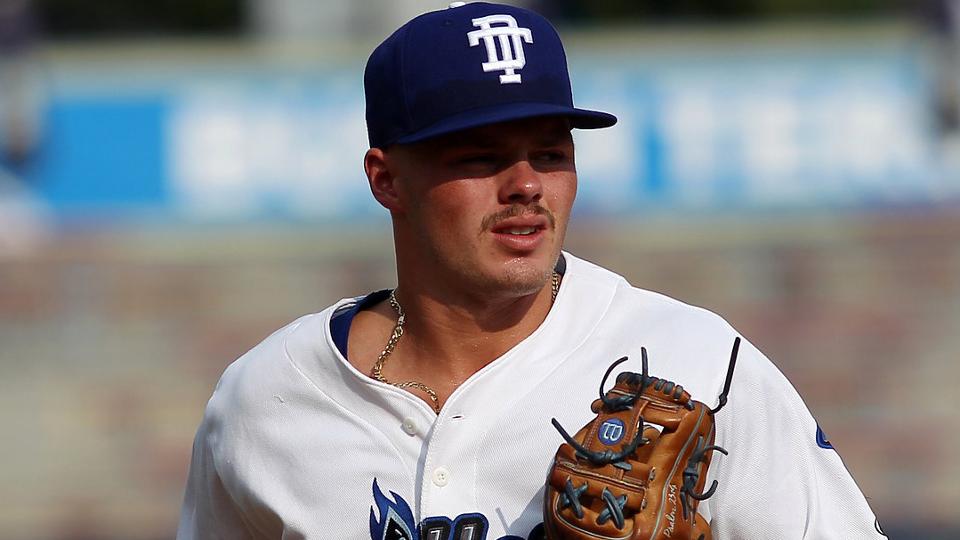 A first-round pick in 2016, Gavin Lux has multiple hits in six of his first 10 games this season. (Ben Sandstrom/MiLB.com)

Growing up in Kenosha, Wisconsin, Gavin Lux is accustomed to harsh winters. But that doesn't mean he was going to turn down a few trips to Southern California during the offseason -- especially considering the opportunity: spending time with Los Angeles Dodgers coaches and players while hitting at Dodger Stadium.

Lux, a 2016 first-round pick now ranked No. 3 in the Dodgers system and No. 67 overall by MLB.com, said he followed up his third professional season by spending one week each month in California. The trips were valuable to the continuation of his development, he said, providing a chance to work through his perceived kinks with some of the organization's most established veterans.

He talked about how to hit left-handed pitching with Chase Utley. He talked defense with Justin Turner and Enrique Hernandez. He took instruction from organization coaches Robert Van Scoyoc, Brant Brown and Aaron Bates. The whole time, Lux straddled a line of seeking out as much information he could while letting the veterans get their work in, too.

"They're super open to everything," Lux said. "The more I can pick their brains, the more I can learn. So, for me being around them everyday was a learning experience for me."

It appears to be paying off already, too.

Through the season's first two weeks at Double-A Tulsa, Lux has hit safely in all but one game. His .400 average is second in the Texas League, as is his .733 slugging percentage and 1.182 OPS.

And he gives part of the credit to those winter talks with Utley.

"I'm super left-eye dominant. I never knew that until this offseason," he said. "So, I started opening up and, honestly, I'm just trying to stay inside and shoot it the other way, and if he stays inside, pull it. I just think the more you see them, the more you get off of them."

The improvement has helped him continue his upward progression that began last year, which followed a disappointing 2017.

In his first full professional season, Lux hit .244 with a .693 OPS at Class A Great Lakes. Looking back, he said, he was thinking too much.

"I was super mechanical," he said. "I was thinking where my hands were and I got super caught up with it. So, going into 2018, I just found a swing that worked and I said I'm not going to toy with it too much."

In a return to Tulsa this year, he's pleased with his approach, a body that has gained 15 pounds over the last two seasons and plenty of lessons from some of the organization's most accomplished players.

Still just 21 years old, he's trying not to get ahead of himself just yet.

"I obviously want to be as good as I can," he said. "I'm going to be where my feet are and take it a day at a time, and just have fun doing it."

No hits, no problem: The Arkansas Travelers are the Texas League's hottest team to start the year, opening 10-3 following Wednesday's games. They've been so good that they once proved they didn't even have to get a hit to earn a win. Four Tulsa pitchers combined for a 10-inning no-hitter on April 14, but the Travs won, 1-0, on Joseph Odom's bases-loaded walk. It is the first time a Texas League team won while being no-hit since Oklahoma City did it on July 22, 1939.

Welcome, Sod Poodles: The Amarillo Sod Poodles are a new addition to the Texas League this year, putting a Texas League team in the city for the first time since 1982. An affiliate of the San Diego Padres, the Sod Poodles have had a rough start in their return, going 5-8. Outfielder Buddy Reed, ranked 17th in the Padres system, leads the league with six home runs and 14 RBIs.

Back at it: DJ Peters led the Texas League with 29 home runs last season, and he's back with the Tulsa Drillers for 2019. The outfielder, ranked ninth in the Dodgers' system, has struggled to start though, hitting .200 with one home run through the first 12 games.

Troy Schulte is a contributor to MiLB.com. This story was not subject to the approval of the National Association of Professional Baseball Leagues or its clubs.