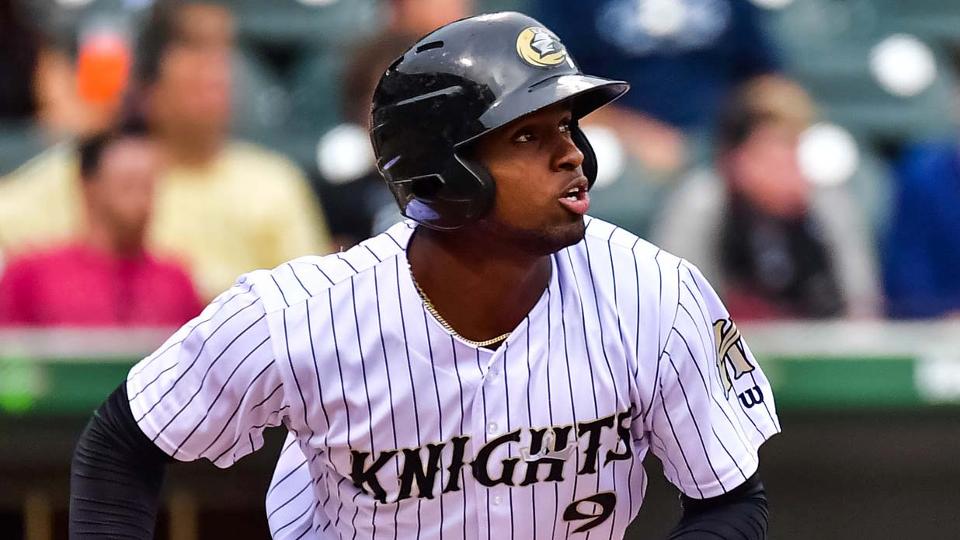 Luis Robert put on a show at the plate and in the field Tuesday night. And Nick Madrigal matched him almost step for step.

Robert started off with a line-drive single to left field off Brian Keller in the first inning and then beat out a single to short in the third. The 22-year-old smashed a triple off the wall in center against the righty in the fourth.

Robert followed that up with a two-RBI double to left off the first pitch he saw from Will Carter in the fifth to extend the Knights' lead to 11-0.

The native of Havana, Cuba, worked a six-pitch walk from the right-hander in the seventh and struck out swinging in the eighth.

"Luis Robert is doing great," Knights hitting coach Frank Menechino said following Robert's three-hit night on Aug. 3. "He is out-talenting the talent that's here. ... This kid, he can run, throw, catch, do everything."

Video: Knights' Robert leaps to rob a base hit

But Robert also made his mark on defense. With two out in the second, Erik Kratz hit a deep fly ball to center that looked as though it would clear the fence. On the run, the 6-foot-3, 185-pounder jumped and was able to snag the ball against the wall.

Eight of the Knights had multi-hit nights, including Madrigal, who also matched a career-high four hits with three runs and two RBIs.

Playing alongside a player like Robert makes the game exciting for the second baseman.

"You see how much talent he has," Madrigal said. "He does things pretty special on the defensive side and the offensive side. I know there's a lot of exciting things happening in this organization from the top to the bottom of the Minor Leagues."

Madrigal opened with a infield single in the first, advancing to second on a throwing error by third baseman Mandy Alvarez and eventually scoring on a single to right by Daniel Palka. After a sharp groundout to third in the second and getting caught looking in the fourth, the No. 43 overall prospect smacked a RBI single to right in the fifth.

"Our team really hit tonight," the Oregon State product said. "It seemed like from start to finish, everyone was hitting the ball pretty hard. Once you get it going, it is pretty dangerous."

Southpaw Kyle Kubat (4-1) worked around two hits and three walks while striking out two over six scoreless frames to earn the win.