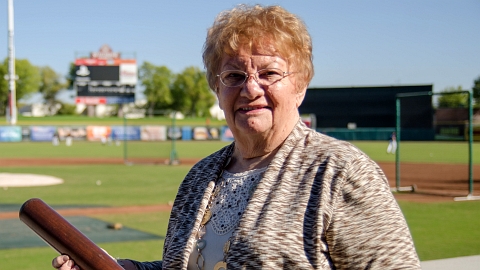 Joan McGrath was one of the Arizona Fall League's five original staff members in 1992.

As one of the Arizona Fall League's five original staff members, Joan is the only remaining staff member and her résumé boasts 22 seasons of continued service to the league. Her influence has reached across every aspect of the league, including administration and overseeing the staff, accounting, marketing, ticket sales, daily and game-day operations, social media aspects, etc., for six AFL clubs.

"During her more than two decades of dedicated service to the game of baseball, Joan has demonstrated all of the characteristics that the Rawlings Woman Executive of the Year Award represents," said Pat O'Conner, President & CEO of Minor League Baseball. "From fostering the growth of young baseball executives early in their careers to ensuring the overall success of the Arizona Fall League, her commitment to the many facets of the game are both worthy of recognition and respect."

In 1992, when the Arizona Fall League was in its early days, Joan was instrumental in helping take an idea on paper to reality. Anything that applied to the operation of a Minor League Baseball club, she and then AFL President Mike Port had to do six times over within a six month time period. Joan was a key to the league being ready for its first season under such an enormous time crunch.

"I was honored to be nominated and overwhelmed to win," remarked McGrath. "It has been a joy to help young people chase and attain their dreams. I'm gratified to have played a role in the expanding opportunities for women in baseball."

Among her many accomplishments in the game of baseball, McGrath is the only female recipient of the Arizona Fall League's Roland Hemond Meritorious Service Award. The award is presented annually to recognize baseball executives who have provided at least 15 years of outstanding service to professional baseball and served the Arizona Fall League in a key leadership capacity. McGrath was named the 2005 honoree, joining other noteworthy past recipients of the award including Bill Murray, Frank Robinson and Dan O'Brien Sr.

Steve Cobb, Director of the Arizona Fall League, added, "For those of us who work daily in the baseball industry, people possessing Joan's patience, character and commitment do not come into our lives very often. And I feel so fortunate to have had Joan as my right-hand, "go-to" person the past 21 seasons here in the Arizona Fall League."

Joan will end her career with the Arizona Fall League and begin her retirement in late December 2013.

Past Rawlings Woman Executive of the Year Award winners