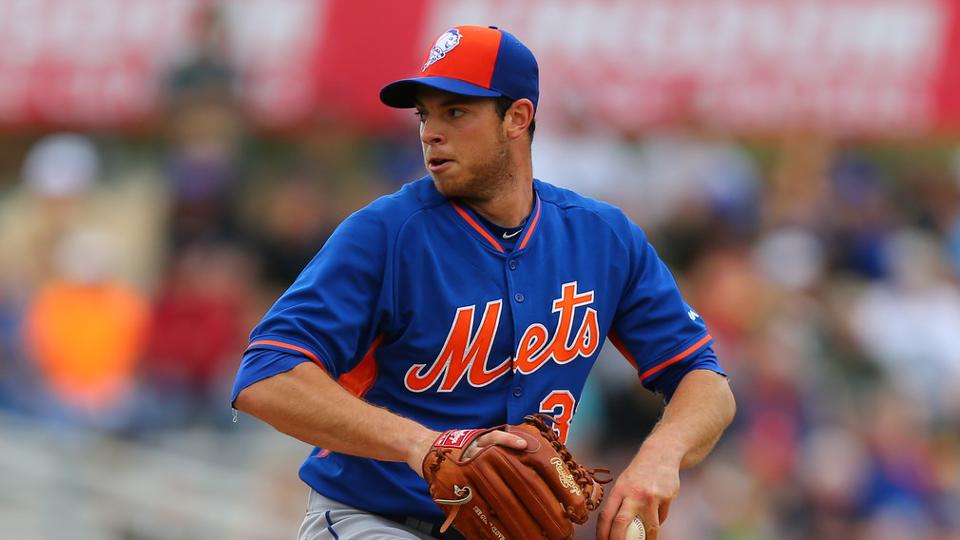 Steven Matz was 12-4 in 25 appearances between the Minors and the Majors last season. (Gordon Donovan/MiLB.com)

Another year, another Mets' pitcher ranked among the top prospects in baseball. Unlike Matt Harvey, Zack Wheeler and Noah Syndergaard, Matz does his work from the left side of the mound. His brief appearance in the big leagues last year, both during the regular season and in the playoffs, opened eyes and paved the way for the team to trade Jon Niese to Pittsburgh to clear a spot in the Opening Day rotation for the New York native.

Matz performed like you'd expect the club's No. 1 prospect to last year, racking up eight wins while compiling a 2.04 ERA in 19 Minor League starts across three levels. The New York native picked up four more victories in six big league starts and experienced the pressures of the postseason, going 0-1 in three starts for the National League champions. Matz is expected to take the spot of the since-traded Jon Niese, giving the club four homegrown starters in their rotation.

Without a first-round pick last year, Lindsay was the Mets' first selection of the Draft in the second round. The club's No. 6 prospect posted a solid .364 OBP and a .750 OPS while playing part of his season in the tough hitting environs of short-season Brooklyn. At just 19, he's regarded by some as raw with high marks for athleticism, so it could be a while before he starts to make his mark.

"With Lindsay, he's continuing to progress, continuing to develop," said Kevin Morgan, the Mets' director of player development. "He had a good spring and it's just a matter of continuing to get the reps. He needs to continue his reps, continue his development, but he's done a good job of getting acclimated to the system. Right now, he will start in extended [spring training]. He had a couple of little nagging things ... minor calf issue ... but then he got hit by pitches two days in a row in the head. Nothing major, but we're just taking every precaution with him. We're gonna start in extended and make sure he's healthy and ready to go."

While the power hasn't been fully on display yet for Smith, the ability to hit has, with 2015 being a strong example. New York's No. 2 prospect finished fourth in the Florida State League with a .305 average while leading the circuit in doubles (33) and RBIs (79). The 20-year-old's six long balls last year represented a career high, and there is an expectation that number will rise as Smith climbs higher in the system.

"He continues to do a good job of being able to barrel the ball, and he's hit a lot of doubles," Morgan said. "The power is usually the last thing to come for a lot of players. While it's hard to project any particular numbers, you continue to hope as he refines his swing and matures physically there can be more power in there.

At the crossroads: Brandon Nimmo, OF

Through five Minor League seasons, Nimmo sports a career slash line of .268/.381/.391, not quite the line expected of the 13th overall pick in the 2011 Draft. Still just 22, the club's No. 5 prospect has yet to show the power the Mets were hoping for, but continues to be an on-base machine. After missing some time last year with a sprained left knee, Nimmo suffered a setback during the offseason, partially tearing a tendon in his left foot. He may open the season on the disabled list.

"I think with Brandon, he spent some time in Triple-A and had an injury," said Morgan, who had a cup of coffee with the Mets in 1997. "I think right now it's get to Triple-A, stay healthy, work on his strike zone command, which he does a really good job of. I think that and continue his outfield play, he'll be ready when the big league call comes."

Morris dipped his toe in big league waters last season, giving up five earned runs while recording two outs against the Blue Jays on June 17. That aside, the 23-year-old right-hander has been a strong contributor to the organization's Minor League bullpen, limiting hitters to a .103 average in 2014 and a .137 average in 2015 while fanning 170 batters over the past two seasons. Should the need arise, the Mets' No. 17 prospect could find his way to Flushing this season.

"I think with Akeel it's going to be continue to command the strike zone with his fastball, and he has an outstanding changeup, so being able to put those pitches together," Morgan said. "There's a ton of possibility for him if he can make those two things happen."

More to keep an eye on: Marcos Molina entered 2015 with lots of promise, but left it needing Tommy John surgery. The 21-year-old right-hander could be back sometime this summer and will look to regain his status. ... Like Morris, Matt Reynolds could find himself in New York this year as the infielder has the ability to play third base, shortstop and second while making solid contact at the plate. ... After wreaking havoc across the Eastern League, finishing third on the circuit with a .317 average, Gavin Cecchini will move a step away from "The Show" in the Triple-A Pacific Coast League